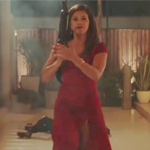 It might seem okay if I hadn’t seen the original. Gina Rodriguez (ANNIHILATION) is quite good in the lead. In this version her name is Gloria Fuentes and she’s an American citizen returning to Tijuana to visit her friend Suzu (Cristina Rodlo, The Terror) and help her with her makeup when she tries out for the Miss Baja California pageant. After an audition they go to a party where her friend tries to flirt with the corrupt chief of police (Damian Alcazar, MEN WITH GUNS), who supposedly has some sway over who wins the pageant. So they’re there when members of the Las Estrellas gang come in to massacre the police, and Gloria, having seen them sneak in while she was in the bathroom, escapes alone.

So the next day she’s alone in Mexico, trying to find her missing friend, making the mistake of trusting a random cop, who brings her right to Lino Esparza (Ismael Cruz Cordova, IN THE BLOOD), the boss of the gang that shot up the cops. He threatens Suzu’s family and forces Gloria to be a crime accomplice and quasi-girlfriend. Meanwhile, DEA agents including one played by Thomas Dekker (the TV John Connor) threaten and try to use her and make promises but don’t seem much inclined to keep her safe. So she’s stuck in the middle of a bunch of assholes.

Hardwicke, of course, directed the first TWILIGHT movie, and here she does flirt a little with treating Lino as an alluring bad boy like Edward. He’s younger looking and less brutish than the equivalent character in the original. (I have no idea what real cartel guys look like, but I bet it’s not these handsome gangsters with fashionable form-fitting clothes and hipster top knots and shit.) 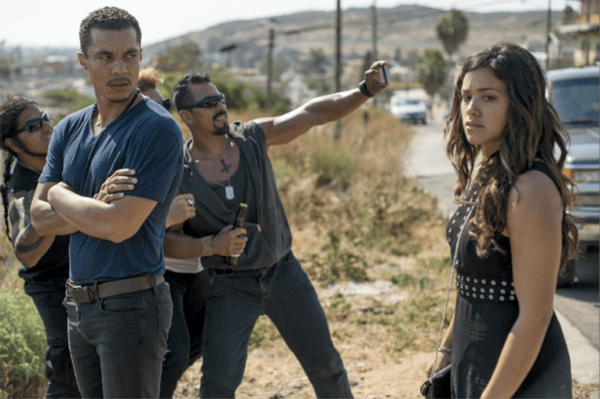 There’s a scene where she sets Lino up for a bust, but the DEA doesn’t rescue her like they promised, so she helps Lino up and carries him away from gunfire. In maybe the most successful deviation from the original plot he brings her to a normal family event and tries to convince her he’s just some kind of anti-hero doing what he has to do in a fight against corrupt cops. He even teaches her to shoot an AR-15 and lets his guard down enough for her to aim at at him. But it’s kind of a cruel gaslighting because she’s seen with her own eyes depraved shit that can’t be written off like that.

Another big change has to do with the part where she smuggles money over the border and is told to tell Lino that there’s a mole in his gang. I prefer the dangerous manipulation of simply not delivering the message, but in this one she is aware that she’s the mole, because the police put a bug in her phone. She does give them the message and has to try to move the bug to someone else’s phone, which admittedly does create some effective drama. 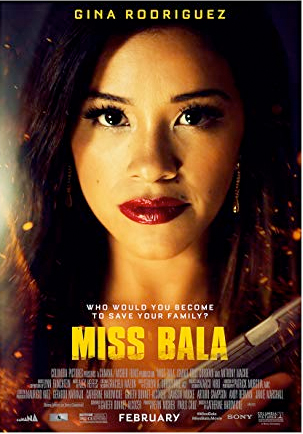 To me the most befuddling change is to one of the signature scenes: when she “wins” the pageant in an obvious set up, and in an excruciatingly awkward unbroken take the devastated real contestants try to play along even though she can’t even smile. For some reason Hardwicke and screenwriter Gareth Dennet-Alcocer don’t bother with all the tension of the other contestants working hard and seeing someone who wasn’t even around take the crown through flagrant corruption. They just have her smile and play her part.

I’m thankful for this movie because seeing the trailer made me remember that there was already a movie with this title, and that’s when I watched it. It’s definitely not an action movie, which this one was marketed as. Even though that’s missing the point of what made the original character interesting – she doesn’t have to turn into an asskicker to prove her toughness – I thought maybe this could be the fun guns and explosions version.

They do in fact change the important scene where she has to park a car with dead bodies in the trunk at a police headquarters to parking a car bomb in front of a safehouse and then watching it explode. And yes, (ENDING SPOILERS COMING UP) they change it so that her friend turns out to still be alive, and she gets to rescue her at the end, and shoot the bad guy. In fact, they go full bullshit by replacing the gut punch ending (she betrays the cartel and foils their assassination plot, but the authorities don’t care and arrest her along with them) with some shit where one of their associates (Anthony Mackie, REAL STEEL) turns out to be undercover, and tries to recruit her to the CIA! I guess if it had been a hit it could’ve been another franchise for Hardwicke to be replaced by male directors on.

And yet the overall feel is not a heightened, more over-the-top version. Though our Miss Bala does get to use some bullets, I believe there’s less action than in the original, since they ditched the huge setpiece where she’s caught in the middle of a big battle upon returning from the states. And everything just feels cleaner, safer, weaker.

They seem to be uncomfortable with showing her in vulnerable positions, treated as a sex object by both the gang leader and the pageant, worrying about what they intend to do to her, having to run around and hide when wearing very little. All that is toned down. In the original, both the taping of money onto her body and the removal of it are degrading, scary scenes. He pulls out a knife and starts hacking at the tape, it seems like he’s gonna chop her up. Here it’s like, nah, we don’t want to dwell on her peril. Let’s get it over with quick.

I get not wanting to be upset. But what’s the point of telling a story about someone going through something harrowing if you’re worried that tension is in poor taste? If you’re gonna wimp out on that then make her do MMA and wheelies and shit. Make her the pro-Latinx PEPPERMINT. Make it worth our while.

Definitely check out the original, though. It’s great.

Anthony Mackie Catherine Hardwicke Damian Alcazar Gina Rodriguez Ismael Cruz Cordova remakes Thomas Dekker
This entry was posted on Monday, May 6th, 2019 at 11:36 am and is filed under Action, Reviews, Thriller. You can follow any responses to this entry through the RSS 2.0 feed. You can skip to the end and leave a response. Pinging is currently not allowed.