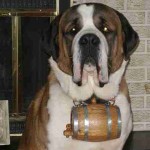 Everybody loves dog movies if the dog is named Air Bud or is a descentdant of Air Bud, and he plays basketball or football, or rides a skateboard or wears sunglasses. But what if the dog’s sport was hunting, and furthermore what if his prey was THE ULTIMATE PREY – MAN. Same prey that Predator chose, in other words. Not so adorable now, is it?

CUJO is another solid Stephen King picture with a high concept about people with marital difficulties being terrorized, but for once it is not a haunted object that terrorizes them, it is a dog haunted only by a viral zoonotic neuroinvasive disease that causes acute encephalitis in mammals. Cujo got his rabies from a bat (the unsung villain of this piece, if you ask me) so now he’s kind of confused and taking his car chasing duties a little too serious. So when the mom from E.T. and the kid from “Who’s the Boss?” get stranded in their car on his property it creates a conflict. There is a strong disagreement about whether or not the dog should be allowed inside the car, basically. 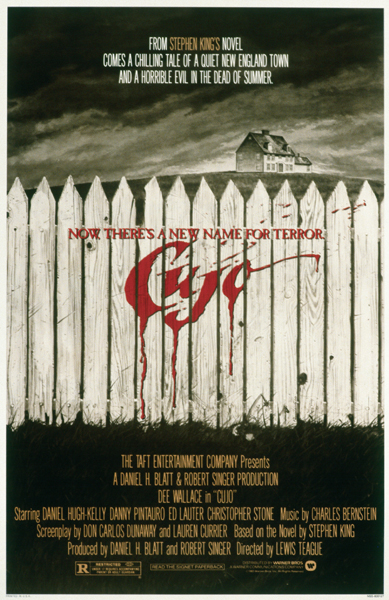 Dee Wallace’s character is married to Daniel-Hugh Kelly, but having an affair with Christopher Stone (the man who put the Stone in Dee Wallace Stone). She just broke off the affair, but also her husband just found out about the affair, so both of the men are pissed at her right now. And the Pinto needs repairs, so she brings it out to the mechanic who owns Cujo and who, it turns out, is not available (i.e. dead). So the car breaks down in the driveway and there’s nobody to help.

Cujo is named after the leader of the Symbionese Liberation Army, played by Ving Rhames in PATTY HEARST. But the dog does not share those radical views. He just likes chasing rabbits and, sometimes, people. Like Bruce Wayne he stumbles across a bat cave and it changes his life forever. But instead of channeling the experience into good Cujo just gets slimy and bites some people to death.

The performances by the 3 leads – mom, kid, and dog – are all great. Wallace shows the pain she’s going through trying to repair the mistake she’s made, then the fear she’s going through under siege by a dog, and finally has a Sarah Connor/Ripley moment of maternal badassness when she decides enough is enough and fights Cujo with a baseball bat.

Danny Pintauro was apparently 6 years old, and I don’t know how the fuck you get a kid so young to be so convincing. He does alot of screaming and crying. Maybe they really let the dogs attack him. I don’t know, but it’s uncanny. I only noticed one line that seemed a little scripted, mostly he seems to bheave like a real kid. Also it’s creepy as hell when he has some kind of asthma attack or something and looks dead.

But the best performance is the dog. Saint Bernards are huge but they’re usually a dopey, friendly looking dog. This dog I believe wants to eat my face off. The rabies makeup looks very real, then they get him to grown and bark, jump on people, tear a car apart. I read that they put meat in the car and let the dog at it, but even knowing that it’s kind of horrifying to see a dog that big climbing on top of a car and trying to pry the windows off. They apparently used a mechanical head at some point in the movie, but not much. Almost all of it seems to be real dogs.

Peter Medak (or “another director” they say on the bonus materials of the DVD) started the movie but was replaced by Lewis Teague, who Stephen King suggested because he had directed ALLIGATOR. I didn’t know who he was and remembered this from the ’80s as being pretty straightforward and workmanlike filmatism. But watching it this time I was surprised how good the camerawork was. At times it brings you into the world of the dog, like in the opening when he chases the rabbit and gets his head stuck in the hole, you’re down there with him, his barks thundering through the chamber, pissing off the bats. Later there’s a scene where he’s getting sick and he’s just laying under the table as his owner is playing poker. The scene could be about the conversation they’re having, which is important to the plot, but the camera is down on the floor with the dog, so it’s more about how he feels. And of course there are plenty of Cujo POV shots when he’s stalking people or pouncing on them.

But the most impressive shot is when the little boy Tad is trying to turn off his light and get into bed. He’s afraid of monsters so he’s trying to flip the switch and jump in bed in one motion. We see it how he must see it: suddenly the room is huge, he’s running in slow motion and as he jumps the camera pulls up over him and flips upside down. I didn’t notice it on the credits, but the director of photography was Jan De Bont. I know most people think of him now as a director of crappy movies, but before that he was a brilliant cinematographer. And who is to say that shooting the claustrophobic spaces of DIE HARD wasn’t informed by him shooting this movie inside a Pinto five years earlier?

I think one thing I like about CUJO is the simplicity of it. There’s nothing fantastic about what happens. Maybe it’s an unlikely scenario but it’s definitely a possible one, just being in the wrong place at the wrong time. There’s a debate going on all the time in Seattle, and I’m sure many other places, about pitbulls. Several times a year or more somebody’s pet pitbull goes nuts and mauls some old lady or toddler to death. Usually the owners are surprised because this dog was perfectly well behaved and never hurt anybody before. Some people want to ban pitbulls as pets in the city and of course pitbull owners get pissed because their dogs so far have not freaked out and murdered somebody’s grandma in the most painful and horrifying way possible.

These dogs, aren’t evil, they’re fuckin dogs. They think they’re protecting themselves. The old lady’s purse is too shiny or something, who knows. Something sets them off, they think they gotta fight and they happen to possess some strong jaws. Just like a guy who happens to have a bunch of guns is gonna cause some damage when he thinks somebody’s breaking into his house. (But it’s really a grandma or toddler.)

So that’s kind of what’s scary about Cujo, he’s just a confused dog. He doesn’t really have malicious intent. But he could seriously fuck you up.

In conclusion, it should be illegal to own Cujo as a pet.

Stephen King
This entry was posted on Saturday, October 18th, 2008 at 11:29 am and is filed under Horror, Reviews. You can follow any responses to this entry through the RSS 2.0 feed. You can skip to the end and leave a response. Pinging is currently not allowed.