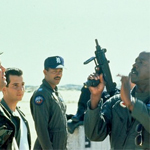 I was glad to see Jason Gedrick back as Doug Masters, now graduated from the academy that Chappie got him into at the end of part I. Oddly call-signed “Thumper,” he’s still popping in the rock ‘n roll cassette tapes to inspire his F-16 hotshottery. I was less glad to realize a couple scenes later that it was supposed to be his jet that got blown up in an encounter with Russian MiGs when they accidentally went into Soviet air space while fucking around, and that part II is about his just-introduced best friend Captain Matt “Cobra” Cooper (Mark Humphrey, FAMILY OF COPS II-III).

So the rock tunes are a little less prominent this time, and we don’t reunite Thumper’s team of flight nerds, or have a run-in with that asshole who did the wheelies and whose idea of bullying was to straight up try to murder him by sabotaging his Cessna. But Cobra does get recruited for a secret mission led by our old friend and mentor Colonel-Brigadier General Charles “Chappy” Sinclair, first seen hip-shaking to some kind of R&B or something (possibly the one by Ruth Pointer and Billy Vera?) while fixing a plane engine.

First, Chappy is on the receiving end of a recruitment speech:

“You’ve been chosen to command a highly classified operation with specially selected personnel. It’s all in the file. A few years ago you flew in and you kicked some hardcore enemy butt. Techniques [?] put you in hot water, not me. But you got the job done. Now we got another one like it only bigger. I’m offering you a star for your uniform and some action for your dignity. We got you some good men. They’re a little rough around the edges, but then again that’s what you like, am I right? Good luck General. Carry on.” 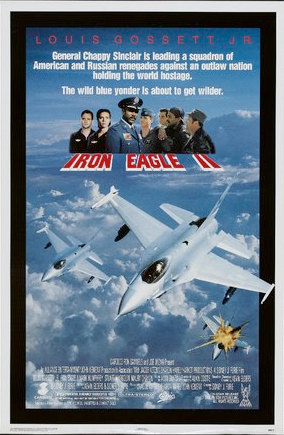 Cooper asserts his Masters-like rebel streak when he ditches his army escort who won’t tell him where they are (a base in Arizona) or what they’re doing there. Chappy asks him if he has “a digestive problem or something” since “it seems to me that orders are a little hard for you to swallow.” The other team members prove themselves goofballs when Chappy and Cooper walk into the barracks and they’re all yelling at each other and trying to turn off the sprinkler system. While they’re explaining themselves, Graves (Clark Johnson from Homicide: Life On the Street, also director of BOYCOTT, S.W.A.T. and many TV shows) says, “I was deprived as a child, sir.”

The next morning they wake up to a bunch of MiGs flying in and they freak out, thinking they’re under attack. In fact these Russians (welcomed by glorious faux-Russian keyboard theme) are their teammates on a joint operation to blow up a nuclear missile silo in “the Kavior Gorge.” Of course there are many tensions between the two sides, and Graves harasses and scams the Russians. A fight breaks out during a basketball game, leading to one Russian soldier firing three bullets into the ball (which has no repercussions and is meant to be funny, judging by the keyboard sound it inspires on the score by new composer Amin Bhatia [DETENTION {the Dolph Lundgren one}]). Cooper spends his time checking out the one female on the team, Valeri Zuyeniko (Sharon H. Brandon), including when she’s in the shower, and this leads to other kinds of tension.

But during their training exercises Cooper recognizes the flying style of one of the Russians, Lebenov (Colm Feore, FACE/OFF) as the guy who blew up Doug Masters. When Cooper flips out about it Chappy realizes they were both friends with Doug and takes him for a beer to talk about it. But Cooper continues to be hotheaded and competitive both in the sky and on the ground, where they fight over Valeri. They punch each other and get grounded but then flight team leader Major Bush (Jesse Collins, DARKMAN II: THE RETURN OF DURANT) gets Goosed during training and there’s a rock ballad montage of the team flipping through the collection of boardwalk style caricatures he’s been drawing throughout the movie.

The operation is cancelled, which Chappy says was what the Powers That Be wanted all along and that’s why they assigned all these bad news bears – including himself – for the team. That’s cool though because then it gets to be a rebellious under the table off the record unauthorized vigilante type mission like in part 1. If a bunch of kids can kick hardcore enemy butt without authorization then I’m sure some adult professionals can.

First he’s gotta get the Americans and Russians playing well together, so he performs an intense therapy session where he gives them guns and yells at them to shoot each other and then calls them losers and stuff and eventually they all are inspired and line up to tear off their flag patches. It’s one of those things that’s just completely irresponsible and stupid that only flies because Gossett is so good.

The mission really is bigger this time – they fly around and shoot missiles again but there are also tanks and people on foot, and the base blows up and people catch on fire and fall through windows. Our guys all bond and learn that we’re all alike and those uptight Russkies learn to disobey orders because of “American influence,” and if I can change and you can change then everybody can change! The mission is so successful that it becomes official, the presidents of both countries release a joint statement and everybody gets dress uniforms with combined flag patches. The boss man, General Stillmore (Stuart Margolin, KELLY’S HEROES, DEATH WISH) tries to apologize to Chappy, but Chappy pretty much tells him to fuck off and goes over to shake hands with the Russian Colonel (Alan Scarfe, CATHY’S CURSE, DOUBLE IMPACT, LETHAL WEAPON 3).

Though the overall quality of the movie doesn’t match the first one, they still sprung for a soundtrack with some major artists on it, this time featuring Rick Springfield, Alice Cooper, Britny Fox, and Bruce Springsteen covering Jimmy Cliff’s “Trapped.”

It came out in November of ’88, half a year after RAMBO III, a movie sometimes said to be too late in the Cold War to pay dividends on its anti-commie themes. I’m almost positive – and you can go ahead and look this up – that the cooperation depicted in the movie was seen by the various world leaders and gave them the idea to end the Cold War. Thank you, IRON EAGLE II.

Clark Johnson Cold War Colm Feore Jason Gedrick Kevin Elders Louis Gossett Jr. Mark Humphrey Sidney J. Furie Stuart Margolin
This entry was posted on Monday, March 4th, 2019 at 11:30 am and is filed under Action, Reviews. You can follow any responses to this entry through the RSS 2.0 feed. You can skip to the end and leave a response. Pinging is currently not allowed.