Hodder is, of course, the guy who portrayed Jason Voorhees in FRIDAY THE 13THs 7, 8, 9 and X. We hear about how being stunt coordinator on Renny Harlin’s PRISON accidentally led to wearing monster makeup (and putting bugs in his mouth) and impressed makeup genius/part 7 director John Carl Buechler enough to get him the role of his life. And they get into what he added to the character, how his suggestions and fearlessness spruced up the movies, what his family thinks about it, how much fans like to be choked by him, how devastating it was to be replaced for FREDDY VS. JASON, even some tidbits about doing stunts on AVENGING FORCE (actually a pivotal moment in his life, you’ll find out, and not because the movie is so cool).

There’s some stuff about his later movies, like they interview Adam Green about his work on the HATCHET series, which I’m afraid looks like ONCE UPON A TIME IN THE WEST compared to some of the other stuff they show clips of. 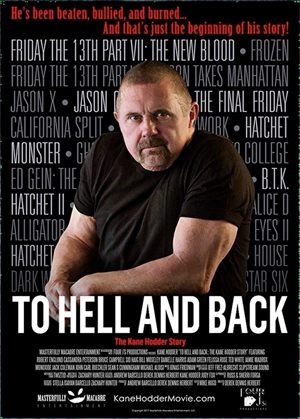 But as much or more time is spent on formative traumas: being bullied as a child, being horribly burned in a fire stunt, and (more importantly) almost dying due to four months of poor medical care. He connects these events together as things that made him bitter and suicidal, that you couldn’t possibly understand if you haven’t experienced them, and that he was too ashamed and stubborn to talk about for years. People would see his burn scars and he’d lie about it happening on some movie, instead of the truth that he was 22, showing off for a local newspaper, and used the wrong kind of glue as a burning agent.

There’s a lot of b-roll of Hodder standing in nature or looking out over cities with a thoughtful look on his mug. And to be honest there’s enough of it that I started thinking “Oh come on, he’s just looking off in the distance for the cameras, he’s not actually brooding about his past.” But I do appreciate that these shots break up the standard interview footage.

Some of the most powerful scenes have Hodder revisiting the sites of incidents he’s describing. He tells a story about hanging off a 35 floor hotel balcony as a teenager, then we see him stepping a leg over just such a balcony. The camera looks over the ledge, and my stomach drops. Later he returns to the burn ward where his life was saved years ago, tries to figure out which room was his, how it was laid out at the time, and is even able to talk to and thank the actual doctor who turned his condition around.

That’s the dichotomy there. He’s a psycho, and he’s an open book. This movie did raise my respect for Hodder. Unlike many FRIDAY fans, I’ve never had a preference for one Jason actor over another. Although I felt bad for Hodder for not getting to do FREDDY VS. JASON, I was always skeptical of the conventional wisdom that a guy who came in years after the four best installments should own the role forever. I swear I read at the time that director Ronny Yu wanted an even bigger Jason, but the 2017 book Slash of the Titans: The Road To Freddy vs. Jason dismisses that as an untrue “rumor,” saying that replacement Ken Kirzinger is only an inch taller than Hodder, and that Yu blames executives for the decision. I checked the 2003 Freddy vs. Jason: The Official Movie Magazine, and it says that “Yu has remained largely mum on the issue” but quotes Robert Englund speculating, “I believe that Ronny had a different concept of Jason’s physical nature in mind. I just think he was looking for a tall, skinny, Anthony Perkins kind of character” and paraphrases producer Douglas Curtis saying that “the consensus was that they should look for somebody sleeker and newer to play the role.”

(None of that is mentioned in the doc, which purports that Hodder was never given a reason, and shows how painful it was for him to be invested in the idea of a showdown with Freddy for years when everyone assumed he’d be involved. But luckily it also shows that he’s gotten over it, or is starting to.)

Another thing I like that no one points out, but that’s very much on display here, is that this guy forever associated with playing a silent killer actually has a great voice. So gather around the campfire and listen. I’ve always enjoyed seeing him pop up as a thug or monster, and now that I know The Kane Hodder Story I’ll appreciate it so much more.

Adam Green horror documentary John Carl Buechler Kane Hodder
This entry was posted on Wednesday, October 3rd, 2018 at 10:08 am and is filed under Documentary, Reviews. You can follow any responses to this entry through the RSS 2.0 feed. You can skip to the end and leave a response. Pinging is currently not allowed.

14 Responses to “To Hell and Back: The Kane Hodder Story”