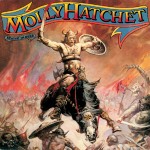 This pattern started with BEHIND THE MASK: THE RISE OF LESLIE VERNON and fortunately this one is not as asinine as that one. It’s not terrible, but it doesn’t cut the mustard. Believe me, I wish it did. I see mustard everywhere and I want nothing more than for that mustard to be cut by a movie like this. But just being above the standards of the DTV giant snake movies is not a horror resurgence. 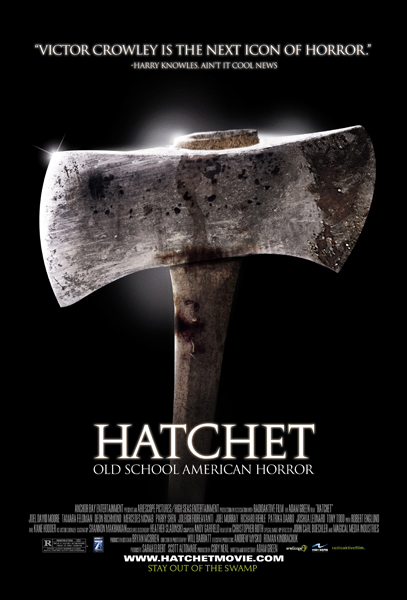 I had hopes for HATCHET because unlike BEHIND THE MASK there’s nothing postmodern or meta about it. It’s just a straightup slasher movie about a big, unkillable freak chopping people up in the Louisiana swamp. His name is Victor Crowley and he’s played by Kane Hodder, who played Jason in some of the later FRIDAY THE 13ths. Victor has a backstory kind of like Jason meets the guy in THE BURNING: he was a deformed freak who kids treated bad, then his dad (also Kane Hodder) hit him in the face with a hatchet and also I think he was set on fire or something, I forget.

I enjoy and miss this type of movie, but I can’t give it a pass just based on nostalgia. I like using that blues analogy for slasher movies, I think I made it up in my HIGH TENSION review. I believe that slasher movies are a classic American artform not equal to but similar to the blues. There are simple, familiar tunes that you follow, and you put your own spin on it, but you don’t have to get too fancy, you still want it to be recognizable. Well, thankfully the song is recognizable in HATCHET. But on the other hand it’s a pretty cheesy Blues Hammer type of take on the song. It just isn’t cool.

And this is gonna fuck up my analogy but I think one huge problem is the music. Low budget directors, listen up. You may not want to spring for real film, I understand that, I’m getting used to that. I wish you would make it look like a real movie but if you can only afford digital or whatever that’s between you and St. Peter. But if you don’t have some incredibly talented dude making weird sounds like Tobe Hooper did way back on the original TEXAS CHAIN SAW, or a very original keyboardist like John Carpenter, then please, I beg you, don’t be a cheapskate. Get a small orchestra. I don’t care how good the technology gets, a keyboard is a keyboard. A keyboard is not an orchestra. And when you try to play it like an orchestra you make an ass out of you and Victor Crowley.

Yeah, maybe those FRIDAY THE 13ths were cheap but it doesn’t seem like anybody told Harry Manfredini that. He classed up the joint with his PSYCHO violins and experimental sounds. Even on part 3 when he turned it into a dance tune he still knocked you on your ass. But the keyboard violins in HATCHET sound like some fuckin LEPRECHAUN movie or something. It would be better to have no music than to have this.

I don’t think the look is cuttin it either. How do you make a horror movie in the Louisiana swamp and have no atmosphere? The whole thing looks like people in front of some trees at night, but with a flood light on them, and a smoke machine in the background. There’s no sense of place, no feeling that there is any swamp beyond this little chunk we’re looking at, no sense that they have moved from where they started out.

There’s not much cleverness here either. There’s a part where a guy says that the touristy swamp tour is “about as fun as a bag of dicks,” that’s about it for successful jokes. And I kind of like the abrupt ending in the middle of mayhem. Also there’s a part where a guy keeps getting body parts thrown at him, that’s pretty funny. But otherwise not much to surprise you.

I guess because of the genre they figure they can get away with all the characters being cliches (wannabe actress, dumb blond girl, jive talkin black guy). Fine, but making them all obnoxious is not the same as making them funny. Even the lead (a guy from ART SCHOOL CONFIDENTIAL) who is obviously supposed to be the most sympathetic they make you hate by joking about how obsessed he is with his ex-girlfriend. I agreed with his friend that he should shut up. And by the way, the token black guys in slasher movies are usually a streetwise tough guy stereotype (see FRIDAY THE 13TH 3-D, NIGHTMARE ON ELM STREET 4, TEXAS CHAINSAW 3), not a bug-eyed Steppin Fetchit scaredy cat. This guy is so afraid he climbs up a tree and refuses to come down.

Although it’s obviously made by fans of the genre I think they made a mistake by not staying closer to the traditional story setups. Instead of having a group of friends in the same area getting picked off one by one without knowing it at first, they have them all stuck together after their boat sinks. So there’s too much time with a big group of people arguing about what to do and where to go, and not enough suspense about who’s gonna get it next and who’s gonna figure out what’s going on.

Also dude, putting Robert Englund and Tony Todd in cameos is kind of lame. If they had good roles that fit them well that would be kind of cool, but these are both dumb characters and bad performances. Freddy and Candyman deserve better. I guess of the ’80s and ’90s horror icons it’s Mr. Hodder who comes off the best, but I don’t think his Victor Crowley is gonna join the pantheon. Basically he’s an elephant man wearing overalls with dubbed growling and roaring like the Toxic Avenger. Not really scary or funny, not sure what they were going for there. Maybe sad?

I wonder, what is it that makes me harder on these movies than the rest of the internet? Am I a horror snob? I don’t think so. In fact among my horror fan associates I’m considered the chump with the low standards. I’m the guy who at least thought the John Carpenter episodes of Masters of Horror were pretty cool. Who liked HOUSE OF 1,000 CORPSES and DEVIL’S REJECTS and the remake of HILLS HAVE EYES. Who still stands by WOLF CREEK and secretly bought a copy of SILENT HILL and paid money to see HILLS HAVE EYES 2 in the theater and actually had high hopes for it. I want to love this stuff.

My only guess is maybe alot of the writers who have been praising this one are more casual horror viewers. They are not the people like me who try to watch all the horror movies that come out, who have seen all the sequels to all the big horror series, even when they know they’re gonna suck, who see the remakes of their old favorites and compile lists of what’s wrong and right with them. And that is a good lifestyle choice on their part and has the added bonus of making them enjoy a movie like this. I guess if you have not found a place in your heart to appreciate Jason popping eyeballs out in 3-D then there is more of a novelty to watching a clumsy modern reflection of that type of movie. There is a residual joy that makes it in there and it will get you drunk if your tolerance level is low. That’s a theory.

And I wonder if part of my problem is there’s some element of a time capsule to those movies, a kind of fetishism for the period they were made in. There’s something about how the film looked back then, how the scenes were lit, how the effects were done, how it looked on location in Connecticut, the hairdos, the clothes. What if I saw this exact half-assed movie, but it was made in 1986? Would it somehow become more enjoyable? Would its flaws seem more forgivable because after all it’s from the ’80s? I don’t know. These are questions to consider.

What I do know is that here in 2007 this movie didn’t work for me. It didn’t rub me the wrong way like its asshole cousin Leslie Vernon did. But if director Adam Green is a blues guitarist he’s no Howlin’ Wolf or even Steven “Slow Hand” Seagal. Thanks for keeping it simple but now you gotta take that template and you gotta smoke. What good is a slasher movie without tense chases, “holy shit!” moments, surprises, or even good laughs? A good straightahead genre movie is a showcase for directorial chops. I mean maybe this isn’t fair but consider holding this up next to THE EVIL DEAD. That’s not a slasher movie but it’s a low budget independent horror movie by a then-unknown director. There was nothing original about the story or characters, but everything was original about the filmatism. Just about every scene has some part where it knocks you on your ass with a shot or a gag or a home made special effect. Raimi and friends actually had less in their arsenal, because they used their friends as the cast (not established TV and movie stars) and I’m betting the budget for HATCHET was several times over EVIL DEAD’s $350,000. But the EVIL DEAD crew had invention and wit coming out of their pores and they were getting its greasy fingerprints all over their lenses. That’s what a breakthrough independent horror movie used to be: NIGHT OF THE LIVING DEAD, TEXAS CHAIN SAW MASSACRE, HALLOWEEN. Now it means any shoddy tribute to those movies that somehow got played in theates.

Anybody remember that movie BAD DREAMS, it had this cult leader killer guy who it kind of seemed like they were trying to position as the new Freddy Krueger. What was that guy’s name again? I don’t remember either. Victor Crowley, you might want to look that guy up and see if he needs a roommate. I think Dr. Giggles has his phone number. They used to hang out with Wes Craven’s SHOCKER.

Adam Green Joel David Moore Kane Hodder slashers
This entry was posted on Friday, September 28th, 2007 at 11:11 am and is filed under Comedy/Laffs, Horror, Reviews. You can follow any responses to this entry through the RSS 2.0 feed. You can skip to the end and leave a response. Pinging is currently not allowed.