COLD PREY 2 picks up right after part 1 at a nearby hospital that’s in the process of being shut down. If more of the crazy mountain man’s victims had gotten away with injuries instead of getting tossed into the crevasse then I’m sure business would’ve been booming. But no, he’s too god at what he does, leaving these poor doctors and nurses without much to do except sit around using the internet to look up how to solve a Rubik’s Cube. 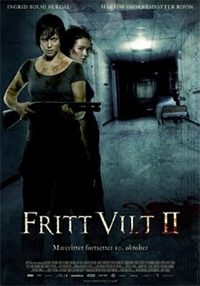 They’ve only got a couple straggler patients left, and one or two relationship problems to deal with. Then somebody goes to investigate an abandoned car, which of course belongs to our Part 1 snowboarders, and almost runs over Jannicke standing dazed with a pickax in the middle of the road. So she gets taken to the hospital, tells the police what happened, and they bring in the bodies of her friends and the killer too. But, you know, sometimes hypothermia can slow your heart beat down so much it seems like you’re dead…

People have pointed out that this has alot of similarities to HALLOWEEN 2 and I agree, especially if you’re talking about the Rob Zombie version. It’s got the Final Girl in shock, staggering in the street hours after apparently killing the slasher. It’s got the gruesome crime scene investigation and body collection with the original actors playing their bodies. And of course it has the killer inexplicably coming alive to stalk the Final Girl in a spooky mostly-abandoned hospital at night.

I like that it’s a different location but still recaptures some of the elements of the first one: smart female protagonists, relationships treated seriously but without going into a huge amount of detail, simple, straightforward photography, modern and slick but not flashy. I also appreciate the non-ironic Part 2ness of it all, the way they fill in the backstory of this mountain man. A cop recognizes the birthmark on his eye, looks up the file on that missing kid, talks to a doctor who knew him and gets the straight Dr. Loomis style inside dope. SPOILER FOR PART 1: I took the revelation at the end to mean it was actually the parents who were the bad guys, they murdered this poor kid so he’s come back for revenge, maybe out of a combination of my-parents-tried-to-murder-me trauma and I-lived-by-myself-in-the-mountains savagery. (And by the way, why do these kids who turn into killers always have the god damn behemoth gene? If this guy or remake Michael Myers grew up to be short and stalky we wouldn’t be having these messes.)

Anyway Part 2 spins it differently. It argues that this kid was a monster from day 1, and the parents were probly killing him to save the lives of others. He was torturing animals, starting fires, you name it, but don’t worry, we don’t have to see a flashback of him getting bullied at school and wearing a Kiss t-shirt and all that. We get a more mythic description of how he started: he was stillborn, didn’t have a heartbeat until he laid there for a while. And then he didn’t cry. Creepy.

With that story in place this guy becomes a higher level of movie slasher in my opinion, but don’t worry, they do a good job still keeping him mysterious. Even though he’s laying on a slab there the camera doesn’t examine him too much, and since his ski mask is frozen to his skin the doctors don’t even manage to get a good look at him. Jannicke even describes him as some kind of snow monster. This time around I realized that he really reminds me of the character Tiny from HOUSE OF THE ONE THOUSAND CORPSES and DEVIL’S REJECTS. More Rob Zombie.

Like part 1 it’s kind of weird about not taking advantage of all the conflicts it sets up. The new characters have every reason to believe Jannicke is wrong, or even the killer herself, but the movie doesn’t really go anywhere with that. But also like part 1 it’s a solid and well-executed slasher movie. It has alot of little character moments I like: the cop naively calling his wife to talk about microwaving his dinner and taping “Norway Tonight” before leaving to find a mass grave, the way one victim is smiling huge because of a girl he flirted with when he gets his throat slashed, the way Jannicke is careful not to cry or lose her shit in front of the kid, the long stare that Camilla and Jannicke share after one tells the other she’s going to die if she really intends to take a snowmobile and go after this killer.

Camilla is a new character who shares heroine duties this time. She’s the one at the hospital who’s supposedly “good with people,” so she has to give Jannicke some bad news and ends up bonding with her. She doubts her “good with people” reputation but proves it to us over the course of the movie.

If there’s one innovative thing in the movie I think it’s the scene where the doctors try to do CPR on the mountain man. At first they think he’s dead but all the sudden he starts showing signs of life. They know he’s the killer but he’s also a human being, and they got the Hippocratic oath and all that. So they don’t hesitate. And of course Jannicke hears the commotion and runs in screaming for them to stop. I know FREDDY VS. JASON has a part where a member of Destiny’s child has to perform mouth-to-mouth on Jason so that he can be alive to fight Freddy, but this is a different context. I don’t think I’ve seen another slasher movie where medics try to save the killer’s life because they’re humane. Hats off to you, Norway.

Norway sequel slashers
This entry was posted on Tuesday, November 9th, 2010 at 11:35 pm and is filed under Horror, Reviews. You can follow any responses to this entry through the RSS 2.0 feed. You can skip to the end and leave a response. Pinging is currently not allowed.