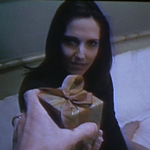 HELLSEEKER is the first since part II (and the only DTV one) to bring back Ashley Laurence as Kirsty Cotton, stepdaughter of Julia, niece of Frank and Final Girl of the two good HELLRAISER movies. Now she’s married to Trevor (Dean Winters, Terminator: The Sarah Connor Chronicles, 30 Rock, insurance ads) and they’re driving somewhere but they suddenly plummet off a bridge, and Kirsty doesn’t escape. Well, thanks for coming back, anyway.

Trevor has a brain injury. In a graphic open-skull scene he gets surgery that has something to do with the pain and pleasure centers of the brain or whatever. Winters spends a good portion of the movie clutching his temples or the bridge of his nose and groaning in agony. This usually happens after some weird shit happens but then it turns out it was a dream or an imagination or whatever. SPOOOKY. 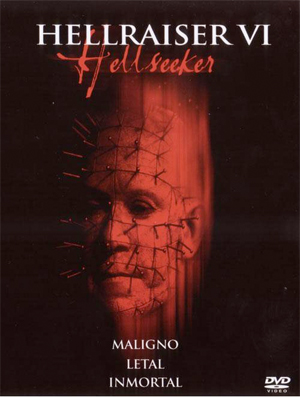 It kind of seems like director Rick Bota didn’t remember much about Clive Barker’s HELLRAISER movies but has seen Scott Derrickson’s INFERNO real recently and figures that must be what it’s supposed to be like. So it’s another movie where the protagonist is a sinner going through a JACOB’S LADDER type endless confusing nightmare, partly in punishment for infidelity. He sees gory imagery (including occasional Cenobites), he talks to people who he’s later told don’t exist, he also keeps being connected to murders that increasingly seem to be his doing. And everybody besides maybe lead Detective Lange (William S. Taylor, THE FLY II, DEAD BANG, Johnny Cochran in MAN IN THE MIRROR: THE MICHAEL JACKSON STORY) believe that he faked the accident to kill Kirsty and get her “sizable inheritance” from when her dad and uncle “died under mysterious circumstances.”

Trevor isn’t as immediately hate-able as the bad cop protagonist of INFERNO, but he has one cliche in common: he can’t stop cheating on his wife. He doesn’t seem to remember what’s going on, but multiple women throw themselves at him, wanting to be tied up and shit. At least one of them seems to be a hallucination, though. She’s his neighbor who shows up right after he sees her topless through her window and gives her this awkward wave: 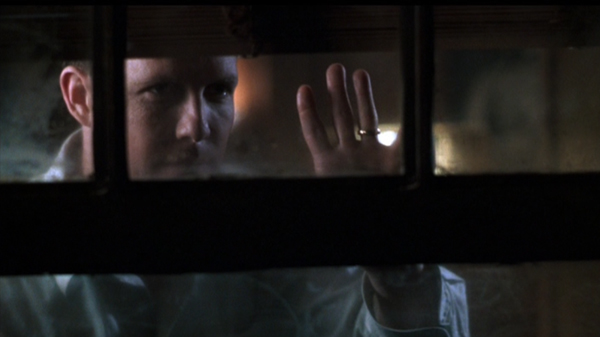 The wave of “oh geez, your boobs are hanging out, aren’t they? Ever since I took those figure drawing classes I don’t even notice nudity anymore” casualness. Also, “This is my wedding ring, I am married, I don’t see other women, you are safe.”

So she comes over and jumps on him, but later he goes and knocks on her door and she doesn’t seem to think she has previously spoken to him.

It takes a while, but he does see Pinhead while he’s getting some acupuncture. (Get it?) He’s laying there and Pinhead walks out of a pressure points chart, pulls a nail out of his head (it’s really long) and stabs it all the way through Trevor’s throat. BUT THEN IT TURNS OUT NOT TO BE REAL. HELLRAISER HELLSEEKER, YOU HUSTLIN SONOFABITCH, YOU ARE BLOWING MY GOD DAMN MIND.

There are occasional moments of inspiration. I like the part where Trevor is sitting in the detective’s office and he hears a guy screaming, looks over and sees some cops are just clubbing the hell out of a guy right there in the office, nobody seeming to care. 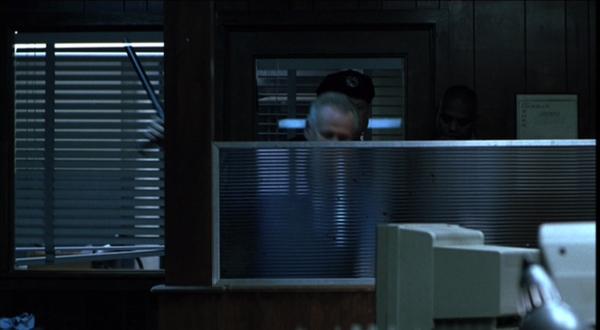 Then as he’s being taken down a hallway he goes past a guy being electrocuted.

Another part I kinda got a kick out of was where Lange and Detective Givens (Michael Rogers, BEYOND THE BLACK RAINBOW), after playing good cop/bad cop for the whole movie, actually become a two-headed monster: 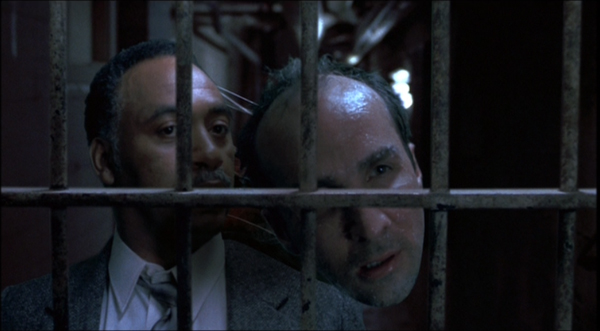 It seems more like a Freddy gag than a HELLRAISER one, but I’ll take what I can get at this point.

After a while Trevor starts to remember different things (Kirsty is seen in flashbacks) and piece together that he really (SPOILER) is the bad guy. And had a Lament Configuration, which he gave to Kirsty as a gift. Major faux pas. Never give a Final Girl her slasher’s trademark horror object as a gift. Everybody knows that. 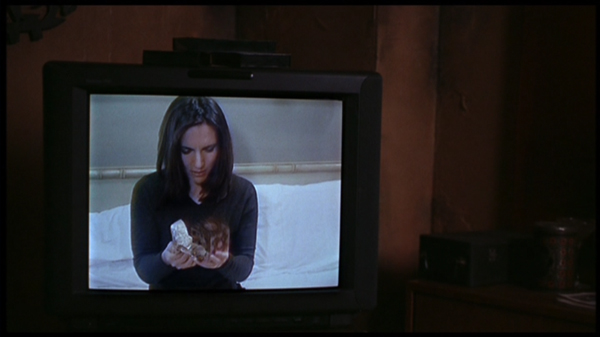 And I don’t blame her for not faking like she likes it. Etiquette is out the window at this point.

Finally at the end Pinhead shows up, in sort of the way he did in the original movie, and confronts Trevor about what’s going on. He talks about greed and lust, sounding judgmental like in INFERNO, like he’s a tough love angel there to enforce morality, instead of a magic torturer who doesn’t really give a shit about you unless you waste his time by showing up and then not wanting to be ripped apart with hooks and shit. But thankfully he says that Trevor’s sins are “mundane” and then he reveals that (spoiler) he’s actually been using his chump ass just to get to Kirsty.

Suddenly Kirsty is standing there face to face with Pinhead and for a second it’s exciting to have the heroine of parts 1 and 2 back in action. But then you find out (spoiler) that she made another deal with Pinhead, which was to bring him five souls in trade for her own. So that nice girl who we rooted for in the real HELLRAISER movies, who literally went to hell and back and overcame her despicable stepmother and uncle and doctor and escaped the grasp of the Cenobites and their god Leviathan… she grew up to murder her husband and his friend and his three mistresses. How fun!

Who wanted to do that? The credited writers? If so that would be Carl V. Dupre (DETROIT ROCK CITY, THE PROPHECY 3) and Tim Day (HELLRAISER: DEADER). It actually could’ve been worse, though. On that commentary track Bota mentions that the actress who plays Trevor’s co-worker who he’s fucking had read for Kirsty, because they didn’t know until the last minute if Ashley Laurence would be willing to do it. So they were prepared to turn HELLRAISER’s heroine into a multiple murderer even if they couldn’t get the same actress.

I will give HELLSEEKER this. The very end is kind of cool. Detective Lange seems to believe Kirsty’s story that her husband committed the murders and then killed himself. She seems to be free and then hey, one more thing. He found the puzzle box in the car, does she remember what it is? She says (and this is true) that it was her anniversary gift. So he lets her take it “to remember him by.” He looks a little devious about it, but you don’t know if he really understands what happened and is giving her the box to mess with her, or if he’s one of the people tasked with moving the box around (and is liable to turn into a skeletal dragon at any moment) or – my favorite – he has no clue, but it’s Kirsty’s fate that she just can’t get rid of the fucking thing. 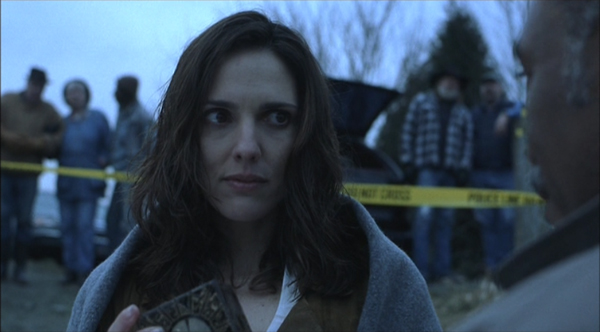 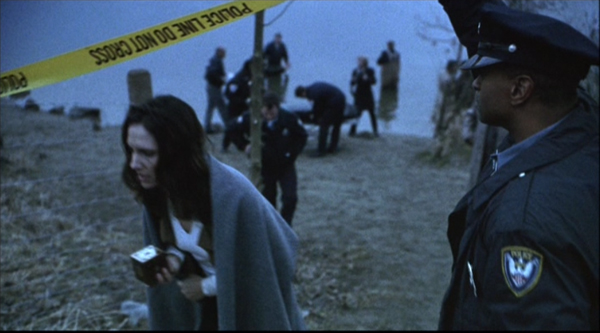 Well, let’s stay positive. Maybe the next director will figure out how to make these work. Let me check who directed the next one.

Oh. Same guy did the next one. And the one after that.

Ashley Laurence Dean Winters Doug Bradley DTV DTV sequels James Remar Rick Bota
This entry was posted on Tuesday, October 20th, 2015 at 10:51 am and is filed under Horror, Reviews. You can follow any responses to this entry through the RSS 2.0 feed. You can skip to the end and leave a response. Pinging is currently not allowed.