So what Robert Rodriguez did for this comic strip SIN CITY, he actually brought in the writer/cartoonist from the comic, made him co-director, and apparently pretty much used the comic as storyboards and script. He used his cool digital movie cameras and convinced a great cast to come in and fuck around in front of green screens and used computers for almost all the backgrounds. According to my team of expert nerds, there are scenes and lines from the funny pages that they cut out here and there and they mixed things together a little bit at the beginning in order to combine three stories into one. But for the most part the shots are based on the drawings and everything written on the page is said out loud in the movie. An obsessive level of faithfulness never thought possible even by Harry Knowles himself. Maybe the most faithful movie adaptation of anything ever, including plays, novels and trading cards. 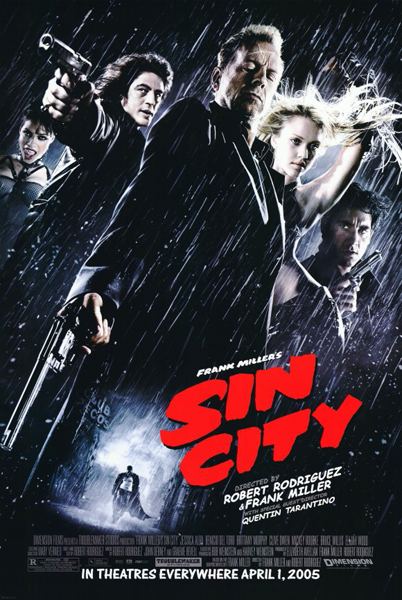 So what this is is a very ballsy and ridiculous experiment, like Gus Van Sant’s PSYCHO. Like most experiments in science, it’s a big failure. But you gotta fuck up in order to invent cancer or whatever. I’m glad these guys did it anyway even though it really doesn’t work.

Based on my detailed research beforehand, I was a little skeptical going in, and I think my hunch was right. See, the comic strip is drawn in stark black and white in order to look like film noir. But then the movie is done with high tech digital effects and makeup in order to look like the comic. Not like film noir. You see the problem here? It’s like a snake eating its tail, or I guess probaly a tail shitting out a snake’s head. The whole concept don’t make sense.

And that’s the problem here. It would be the greatest, most fucked up hard boiled film noir of all time, if it just felt like a film noir. But it doesn’t, it feels like a cartoon. It’s like they pulled that movie Dick Tracy into the side of a van and beat it unconscious with a brick. Then they sucked all the color out with a rubber tube, shot it full of PCP, tossed it on the side of the road, then dumped cold water on it and burned rubber. So this fucked up zombie Dick Tracy wakes up all confused and then goes on a rampage. That’s what Sin City is. It’s pretty funny and cool to watch Dick Tracy running around crazy like that, and it makes you think about noir and hard boiled and pulp. But you can’t quite shake the feeling that it’s still stupid Dick Tracy.

Let’s try that in one sentence. Dick Tracy is to Sin City as Nick Nolte is to Nick Nolte mug shot.

The movie is basically three pulp novel stories, each one about a narrating bad motherfucker who gets into some shit. In backwards order you got my man Bruce as Hartigan, a retired cop who saves a little girl from being molested, but gets blamed for it himself, then has to fight some mutated yellow dude. You got Clive Owen as Dwight, a dude with a goofy overcoat who stops Benicio Del Toro from fucking with his girlfriend, a fight that escalates to involve a severed head, the mafia and an army of heavily armed hookers (one of them a ninja). And then you got Mickey Rourke as Marv, a huge, hulking, ugly, schizophrenic lug who wakes up next to a dead hooker (the only woman who was ever nice to him) and knows that getting revenge on the killer will mean his death, and that it will be absolutely worth it.

I really liked all three characters and the actors playing them. They’re all narrating pretty much nonstop, which usually doesn’t work in movies, but works pretty good here. They talk mean as hell and they sound like they mean it. In concept, my favorite is Marv, a fucker so tough (SPOILER IN THIS SENTENCE) he says, “Is that the best you pansies can do?” after a jolt of the ol’ electric chair. But there’s a problem, a real big problem. They want him to look like the drawing in the comic book, so they got Mickey Rourke under all this makeup. He looks like the amazing human Hellboy.

And that’s what I’m trying to say, that’s the whole problem of this movie. I have talked to my nerd research team and I have even gone so far as to browse the comic strips with my own two eyes. And this is what I discovered. When you’re reading those things all you got is drawings, so the drawings become a real world. You’re looking at this drawing of Marv, and that’s Marv, that’s the real guy, in a real world. Even though there’s pictures, it’s like books. You gotta imagine stuff. But when you see the movie, what you see is what you get. And what you get is a dude in cartoony lookin makeup. You don’t think of him as a real guy who looks like that. You think of him as a fuckin muppet. And muppets just aren’t all that gritty.

I liked the stories, although the third one didn’t make alot of sense. My team tells me in the comic book it’s more clear that the girl is in hiding and that’s why Hartigan can find her but the bad guys can’t, and it’s explained how he got out of prison and also I guess the yellow bastard has his dong hangin out the whole time. But I didn’t read the comic, I saw the movie, so I wish it made more sense. Other than that the stories got a good pulp feel with nice details and twists and lots of great tough guy lines, especially in the narration.

And I liked pretty much the whole cast. Other than the three main anti-heroes my favorite was Benicio of the Bull, who talks in a scary gravelly voice but it gets higher when he gets his throat slashed. Britney Murphy’s pretty funny too. The whole crowd laughed at her melodramatic delivery of the line, “Dwight ya fool – ya DAMN FOOL!” Marv got the crowd going too. He got the best lines and the best violence.

If you put it all down on paper you would figure I’d have to love this movie. It’s got revenge and intrigue and mayhem and extreme violence. It’s got people run over by cars, people jumpin through windshields, two different people with their heads dunked in toilets. It’s got hookers, a whole bunch of severed heads, a whole bunch of impalements and cut off hands and trunks full of chopped up bodies. Guns, swords, axes, knives, explosives, bows and arrows, a hungry wolf, some razor wire. It’s got sinking in tar and jumping off ledges and punching into walls and Elijah Wood from the hobbits movies as a mute, cannibal serial killer martial arts expert. Marv’s parole officer is Carla Gugino, Karen Sisco #2 herself, and she spends most of the movie naked. They got corrupt politicians and religious leaders and they even got em played by Powers Boothe and Rutger Hauer. And it’s shot in real nice black and white with some nice select uses of color (a pupil here, some blood there). And it’s got Bruce Willis with a big scar on his head punching a guy until his face is mush. I mean how could this movie not be a god damn masterpiece?

I’ll tell you how, because they treat this comic book shit too literally. And it was brave and it was cool and it usually looks great, but it just doesn’t work as a movie. They got all these striking shadows, they got a jail cell straight out of German expressionism, they got weird white silhouettes and neon white blood but they also got Mickey Rourke and Nick Stahl wearing Dick Tracy makeup, they got all this violence that looks like a cartoon. Body parts chop off like butter and people jump off buildings like Batman and when people get punched you don’t feel like they’re really getting punched. They’re just getting vibrated on a green screen.

They did a good job on the cars. When they’re driving around in cars or standing on a dock, it looks like Sin City is a real place. But most of the rest of the time they look like they’re doing just exactly what they’re really doing, which is standing in front of a computer drawn background. You don’t really buy this as being a real world. Most of the time it seems like they’re performing a play with fancy video effects.

In a real film noir they’d have a set, they’d have a soundstage, it would seem like a real place. A real dark, shadowy black and white place. Sin City is not a place most of the time. It’s a background.

So more than anything I think what they’ve accomplished here is they’ve proven sort of a suspicion I’ve had for a long time but never thought would be proven so scientifically. And that is that you can’t just translate something 100% literally and expect it to work. You gotta recognize that books are books and movies are movies and you gotta be true to what’s good about each one but you can’t expect them to be identical twins. Because if they are they’ll be fucked up identical twins like those pervert gynecologists with the weird tools. What’s gruesome and badass in a drawing might just be silly in a movie. We know that for sure now.

I wish there was a movie exactly like this but not cartoony. It can be over the top and fantastical but as long as it feels REAL. It’s hard to be gritty and grimy when you’re made out of pixels. I think they were trying to make a movie that was much more tough and hardcore and brutal than this ends up being just because it all feels so phoney and cartoony.

But oh well. As much as it’s a failure, there’s still nothing like Sin City. This is a weird fuckin movie that will probaly scare away many people and fascinate many others. I might even go see it again on the theory that once you have accepted somebody’s flaws you can then get to love them for their true self. Who knows, it might even grow on me. But for now it’s a weird, fucked up, half badass, half cartoon network oddity.

Benicio Del Toro Bruce Bruce Willis Carla Gugino Clive Owen Frank Miller green screen Jessica Alba Mickey Rourke Robert Rodriguez
This entry was posted on Friday, April 1st, 2005 at 6:39 am and is filed under Action, Bruce, Comic strips/Super heroes, Crime, Reviews, Thriller. You can follow any responses to this entry through the RSS 2.0 feed. You can skip to the end and leave a response. Pinging is currently not allowed.