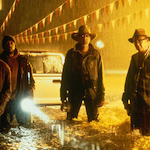 Meanwhile this dude Tom (Christian Slater, THE WIZARD) and his uncle Charlie (Edward Asner, voice of Jabba the Hutt, Star Wars: Return of the Jedi – The Original Radio Drama) are working their shitty job driving an armored car, and they get stuck on a flooded road, unable to move further. Suddenly they’re blinded by floodlights and some guys pretend they’re going to help, but of course they really intend to rob the car. Uncle Charlie is mistakenly shot to death in the hubbub and Charlie runs away with the money. END_OF_DOCUMENT_TOKEN_TO_BE_REPLACED 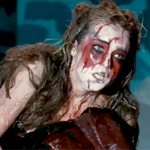 See, that’s the thing about this, it’s a musical. And by “thing” I mean both “unique part” and “problem for me.” You know I don’t have a completely closed mind, I have appreciated a musical now and again. I loved the critically trashed THE MISERABLES, for godsake, I thought it was amazing. And you know how I feel about MARY POPPINS. But by my way of thinking “slasher movie with musical numbers” is kinda like BRICK‘s “hardboiled detective story, but in a high school.” I can admire the cleverness of how it’s put together, but that extra element is a drawback to me, not a bonus. I’d be more excited for the regular thing. I guess I still see room for great straightahead slasher movies in the world. The slots haven’t been filled yet, no need to start getting all fancy. END_OF_DOCUMENT_TOKEN_TO_BE_REPLACED