So I can’t say I was thrilled when, after that decade plus of hopes, Cameron announced “Just kidding, Robert Rodriguez is gonna direct it.” Fresh off of SIN CITY 2. But also I wasn’t stupid enough to scoff at it. Cameron co-wrote and produced the thing. The only other time he did that was STRANGE DAYS, and that turned out pretty good. END_OF_DOCUMENT_TOKEN_TO_BE_REPLACED 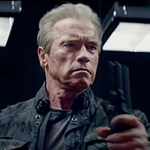 And then it goes and re-creates a few scenes we recognize from the first movie: the man in the garbage truck seeing the Terminator arrive naked in a ball of lightning, the homeless man in the alley seeing Kyle, the Terminator approaching three punk rockers (none of them Bill Paxton) and demanding their clothes. Except then, all the sudden, there’s another, older Arnold Schwarzenegger there, attacking the young one, with the help of Sarah. And we learn that this is a different timeline, not the one from THE TERMINATOR that we and Reese expected. This older Arnold is a Terminator who was sent back to when Sarah was 9 to protect her and raise her. So she’s not a clueless waitress who he has to convince, she already knows about the future and her son and how to shoot guns and everything. END_OF_DOCUMENT_TOKEN_TO_BE_REPLACED