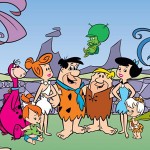 12,008 years ago this very day there was a man who, according to legend — well, the legend on the poster and trailer for this movie — was “the first hero.” He was part of a tribe that had been around long enough to develop hunting techniques, fire, tools, language, religion, jewelry, and eyeliner, but for some reason they hadn’t gotten around to heroism until now. This hero seems like a normal modern day white dude of average intelligence and waxed chest, except he has mud all over his face and nappy dreadlocks. Some time in the intervening years his people must have had a schism and split off into two tribes – the modern “douchebag” took the basic look and demeanor while the patchouli wearing, hackysack playing potheads took the hair and lack of hygiene.

10,000 BC is the new movie from Roland Emmerich. With most movies you might ask “Does it suck?,” but Emmerich is like Schumacher or Bay, that’s a redundant question. “Suck” is the medium they work in, for them that’s the same as asking “Is it a movie?” So I can’t complain that it sucks, I can only report my observations. 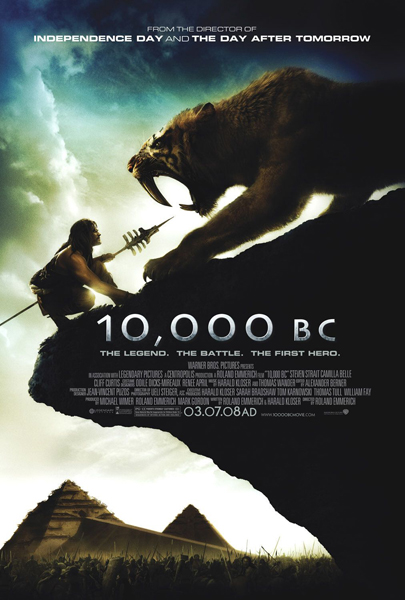 I restrained myself from watching Emmerich’s last couple movies, but once he threw cavemen and wooly mammoths into the mix I thought it might be worth a few good chuckles. To be honest I dozed off a couple times but if you want a fairly harmless, completely idiotic movie with no artistic or social value of any kind but that some dipshits spent about 75 million dollars to make for some reason, and if that movie has to have come out this weekend and have a part where people get chased by ostrich/dodo bird monsters, this has got to be in the top 5.

Before I get into the specifics of this movie let’s take a minute to ponder the mystery of Roland Emmerich. I hate Michael Bay’s movies more than Emmerich’s because they are more mean-spirited, harder to follow visually and have poisoned the well more, influencing other directors stylistically and lowering the industry standard for minimum visual storytelling competence. But still – I understand Bay’s success more then I understand Emmerich’s. As much as I hate Bay’s style, it is a style that he sort of developed and made his trademark, and some people like that shit. They have a distinct look to them that some people like. Emmerich’s don’t really have a distinct look – his trademark is just an all-around corniness and stupidity, an agreement with the audience that he is allowed to insult their intelligence, and not allowed to compliment it. Like a really bad boyfriend. As far as I know the only people who like Emmerich like him as a “guilty pleasure,” going in expecting stupidity like I did with this one.

So how did he get to that level of a guy who keeps getting to make big budget effects movies every couple years? He started out doing cheesy German kiddy movies like GHOST CHASE and American b-movies like MOON 44 and UNIVERSAL SODIER. There are many directors who work with Van Damme and Lundgren, but almost all of them stay struggling in DTV and TV. How does this guy end up being the one that studios start burying in piles of money? Somehow he got to do INDEPENDENCE DAY, somehow people loved that stupid movie, and now he gets a life long free ride? Even after GODZILLA? I’m not mad or anything, I just think it’s weird. Maybe he’s just a really nice guy. That would be cool if this was his reward for being a good friend to everybody.

So anyway. As you have guessed, this is a fantasy movie with no connection to real history or common sense. These aren’t cavemen, they’re eloquent, British-accented hippies with spears. Like 300 they get a Preposterousness License by having narrator Omar Sharif say at the beginning that it’s a “legend.” The legend starts with a blue-eyed girl visiting an old witch lady who determines her connection to a prophecy that “four-legged demons” will attack their people. But never fear, a hero will rise, etc.

I had this idea, wouldn’t it be cool if they made a fantasy movie where nobody ever talked about any god damn prophecy?

Emmerich’s brain doesn’t have the capacity for original thought, so you can tell he was watching 300 and APOCALYPTO while he wrote this one. From 300 he gets battles with elephants, a young warrior letting a beast fall onto his spear, even the climactic shot of a long distance spear throw that hits the weird, god-like monarch and proves that he’s mortal. From APOCALYPTO he gets the exotically dressed strangers that storm the village, abduct people as slaves and bring them to a pyramid.

Of course, none of those things were startlingly original when they were in 300 or APOCALYPTO, but they were much better executed. The action scenes in 10,000 BC are fine, but the ones in 300 were better, the ones in APOCALYPTO were way better. APOCALYPTO had an organic, realistic look to it that made the ridiculously inaccurate historical details seem believable. 300 went the other direction, making everything look like a painting, so it was nice to look at and allowed for much more interesting exaggeration. APOCALYPTO had a likable hero, 300 had a mythical one. 10,000 BC is content to just plod along in the middle, looking cheesy and fake but not in an artistic way, having characters but not making them interesting.

This one also has a sort of racist subtext, but I’m not gonna blame that one on 300. It’s definitely an Emmerich trademark. I think he is genuinely trying to be a good guy and show different races and nationalities working together like he always does, but you can’t help but notice the girl is the chosen one because she has blue eyes and the white guy with dreadlocks leads all the Africans into battle like they never could’ve figured it out for themselves.

By the way, I am required by law to mention that Camilla Belle, who plays the blue-eyed babe, played Steven Seagal’s daughter in THE PATRIOT. She could be the next Catherine Heigl (Seagal’s niece in UNDER SIEGE 2.)

As far as moronic, crappy movies go, this is a watchable one. If I had seen it with an audience that wanted that it might be fun, there is plenty of terrible love story dialogue and silly turns of events to laugh and groan at. For example when they show a wall carving of a UFO to imply that the bad guys are aliens or their asociates. Or when a character offers the alternate theory that they are from Atlantis. I was hoping they would work bigfoots and chupacabras in there, but if they did I missed it.

The most evil of the bad guys looks like Osama bin Laden reborn as a professional wrestler. When he finally gets a spear through him look for the kid Bacu standing in the background smiling in delight. If you see it, that is. Which I wouldn’t necessarily recommend. Why must we keep reliving the past? What about moving forward into the future?

This entry was posted on Sunday, March 9th, 2008 at 3:55 pm and is filed under Action, Reviews. You can follow any responses to this entry through the RSS 2.0 feed. You can skip to the end and leave a response. Pinging is currently not allowed.