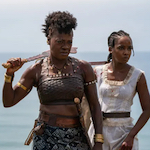 THE WOMAN KING has an irresistible hook that made it a hit: Did you know there was an all-female military regiment in 1800s West Africa, “THE MOST EXCEPTIONAL FEMALE WARRIORS TO EVER LIVE”? Now that you do, wouldn’t you like to see them kicking ass on screen, fighting off the invading “Europeens,” with Academy Award winner Viola Davis as their badass leader?

For me the answers to those questions were no, I don’t think I did, and yes, of course I would. I meant to see it in theaters, but I missed it. Reviews were mostly positive, but I remember them seeming a little subdued. Maybe I misread them, or maybe they wanted it to seem more like a Very Important awards season type movie to really get behind it. I think it has plenty of substance to it, but director Gina Prince-Bythewood (THE OLD GUARD) doesn’t treat that like the main attraction, and she shouldn’t have to. There’s a precedent for crowd-pleasing historical action dramas winning best picture, but BRAVEHEART and GLADIATOR could pass for highfalutin without having to address any issues, you know? They just had to make a rousing speech about bravery and killing a motherfucker, nobody expected them to say something deep about the world’s problems. END_OF_DOCUMENT_TOKEN_TO_BE_REPLACED

So, you know, if you haven’t seen it yet, you surely can picture that type of movie, but also you shouldn’t read this review because it’s ALL SPOILERS and also you won’t know what the fuck I’m talking about. END_OF_DOCUMENT_TOKEN_TO_BE_REPLACED 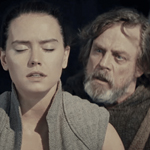 After THE LAST JEDI, though, I’m sold. And worried about him not doing the next one. In his capacity as the first sole-writer-and-director on a Star War since Lucas, Johnson succeeds in so much more than I could’ve hoped: continuing and deepening the characters from THE FORCE AWAKENS, bringing back Luke Skywalker for a powerful completion to his arc, thrillingly upending some of our expectations, putting a personal mark on the world of Star Wars, and saying new things about the meaning of the saga as a whole and its application to the world. Also there are some weird new creatures, and Luke milks one of them. END_OF_DOCUMENT_TOKEN_TO_BE_REPLACED 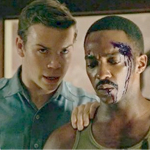 The subject is the Algiers Motel Incident, a particularly gruesome chapter of the 1967 Detroit riots when police officers and National Guardsmen detained a group of young, mostly African American people, beat and tormented them, (SPOILERS if you don’t know about the true story) murdered three of them and were not punished for it. END_OF_DOCUMENT_TOKEN_TO_BE_REPLACED

Previously on Disney’s Star Wars™: When it was announced that George Lucas had sold Lucasfilm to Disney and other people were gonna make new Star Wars movies, the world celebrated like the end of RETURN OF THE JEDI special edition but with the song from the original end of RETURN OF THE JEDI. I wasn’t so sure. I thought Lucas was a one-of-a-kind visionary whose works couldn’t be duplicated without his oversight, and I would rather see a flawed idiosyncratic Star War like his prequels than the potential mediocre one made by somebody else. But on the other hand as a huge Star Wars trekkie to the bone I couldn’t help but be excited to see Luke, Leia, Han, Sebulba and Chewbacca on the big screen again, something I never expected to happen. So when the trailers came out I was as down as anyone. END_OF_DOCUMENT_TOKEN_TO_BE_REPLACED