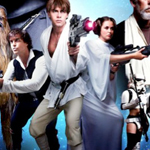 I’m kinda hesitant to write about this on Halloween, but holy shit, that’s crazy news that George Lucas sold off all his shit to Disney for $4 billion plus and that they’re gonna make STAR WARS 7, 8 and 9 and (if people are reading this right) 1o and 11 and 12 and 13 and more every two to three years until the superstorms swallow us up.

1. I can’t help but see this as the Nerd Empire celebrating the expression of an individual artist making the official switch to a Franchise, a Property, a Trademark. I think I read something on the internet a while back about how some people only like the earlier Star Warses, but still. It was clearly the vision of one particular guy, who took independent film far beyond what anybody else ever did. There is something about even those prequels that you hate so much that is clearly him. Nobody else could or would make movies like that, both the good parts and the bad parts. And that’s why Star Wars is special. Not because of the pajamas that you remember you had. Although I’m sure they were great.

Of course, I’m the guy who enjoys those movies for the weird, ambitious, sometimes ridiculous, sometimes exhilarating messes that they are, so I’m gonna be easier on them. But I would’ve preferred they leave it at that and then other people can make the TV shows and everything, but as far as movies the Jedi returned and that’s the end of the story.

Which brings me to…

2. I don’t want there to be episodes 7, 8 and 9! You’re telling me the destruction of the Empire and the redemption (as much as possible) of Darth Vader is not the end? Then it turned out things were still shitty and they had to have more star wars? I don’t like it. If you must do more Star Warses why can’t they be a different story in that same world, a new beginning?

I mean I guess from what I’m reading in some places Lucas wrote the treatments for these, so maybe it’s part of his original plan, I don’t know. But continuing after RETURN OF THE JEDI seems pretty forced to me.

3. I am almost positive that Disney did this because they bought Marvel Comics only to make a Howard the Duck movie and then found out Lucasfilm still had the film rights and they didn’t want to sit around waiting so they just bought the fuckin thing. This is also why they bought Pixar, so Pixar would not make a competing duck movie. And also the Muppets. It will play on ABC and ESPN also. Disney’s Marvel’s Lucasfilm’s Howard the Duck. Think about it.

4. I cannot fucking believe that I have to hear you god damn people complain about more STAR WARS movies every three years for the rest of my life. I was perfectly happy to live with the residual prequel whining. I didn’t ever expect more. I might have to cancel my internet.

5. But of course I hope whichever poor fucker inherits the triple-edged sword of directing this thing does a great job and makes an awesome movie and I’ll be there with the rest of you probly wearing a cape and goggles or whatever and I hope they got chewbaccas and ewoks in it and if they don’t then Disney purchased the rape of my childhood.

This entry was posted on Wednesday, October 31st, 2012 at 1:37 am and is filed under Blog Post (short for weblog). You can follow any responses to this entry through the RSS 2.0 feed. You can skip to the end and leave a response. Pinging is currently not allowed.