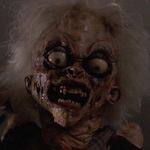 In the opening sequence, veteran homicide detective Jersey Callum (Ed Nelson, who played Harry S. Truman in BRENDA STARR) and a younger partner Gordon (James Eustermann, later the makeup effects coordinator of SPECIES) come to a house looking for someone in regards to an investigation. No one answers so they go inside to look for her. There’s something very authentic and sad about this big, messy house. Not quite full-on hoarder, but garbage bags all over, pans covering every counter, laundry hanging in the kitchen.

The first surprise of the movie is that this person Jersey is looking for is not dead. She was just napping. The second surprise is when you realize that the heroes of the movie are gonna be these two unglamorous character actors. You don’t see that everyday, and I like seeing stuff that you don’t see everyday. 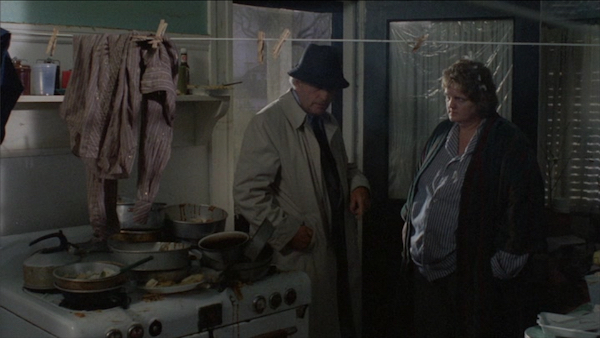 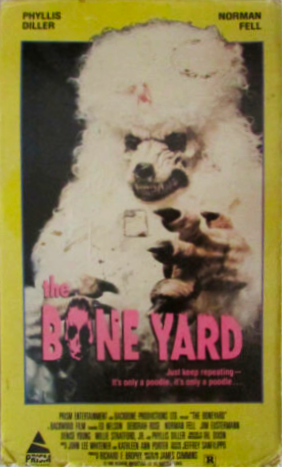 Writer-director James Cummins had originally cast Clu Galager, who had to drop out for medical reasons, so in the 11th hour they found Nelson, a veteran of ‘50s A.I.P. productions including ATTACK OF THE CRAB MONSTERS, INVASION OF THE SAUCER MEN, TEENAGE CAVEMAN, HOT ROD GANG and A BUCKET OF BLOOD. The other central character, Alley Oates, is played by Deborah Rose, whose previous roles were things like “Jail Matron” in FUGITIVE LOVERS, “Midge” on an episode of The Golden Girls, “Bank Teller” on a Murder, She Wrote, and “Beauty Salon Attendant” in TROOP BEVERLY HILLS. This was her last role, but it must’ve been nice to go out with a bang playing a psychic who doesn’t want to help police anymore because she’s so traumatized by the macabre visions that work gives her.

Jersey drags Alley reluctantly into one more case to try to identify the bodies of three children, and right away she’s experiencing horrible visions of kids with skeleton arms on her porch. The titular boneyard is the mortuary they go to to look at the bodies, horrifyingly authentic rotted things that they see over a video link talking to a pony-tailed mortician named Shephard (weirdly for this role they wanted Alice Cooper, then Warren Zevon, then settled for Norman Fell [who was in THE KILLERS with Clu Gulager]). 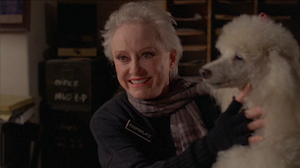 I wouldn’t say THE BONEYARD is that much like THE RETURN OF THE LIVING DEAD, but one quality it has in common is that kind of hang out feeling of people getting through another night shift (and then all Hell breaks loose). The ornery woman at the front desk is named Miss Poopinplatz, and she’s played by Phyllis Diller (DOCTOR HACKENSTEIN), but believe it or not it’s kind of a serious role – Fangoria called it “a rare dramatic turn” for Diller. Her personality is funny (she insists on seeing Jersey’s ID even though she’s known him for years), but she’s not making jokes or mugging. Diller is interviewed on the DVD, claims to really enjoy watching the movie, and proudly says that it’s the only one to ever show her real hair. Using her actual hairline gives her quite a different look.

What these characters (plus another mortuary employee [Willie Stratford, BLACK RAINBOW] and a young woman [Denise Young]) soon learn is that the dead kids aren’t murder victims, they’re in fact ancient demons called kyoshi that the owner of the funeral home, Chen (Robert Yun Ju Ahn), is sworn to keep in check by feeding them human flesh. (There’s an unfortunate occurrence of yellowface in a flashback about his family’s curse – thankfully it’s over quick.)

The “dead kids” come to life and terrorize everybody, up to and including rubbing green slime in Miss Poopinplatz’s mouth to transform her into a monster, plus a similar fate for her poodle Floofsoms. It becomes an action/survival type scenario as they barricade themselves, climb through vents, find guns and explosives to fight back with, etc. This is all entertainingly done, but what truly makes the movie land is some absolutely top notch monster design and construction. Director Cummins was only around 30 years old, but this directorial debut came after a decade of working in FX on movies including THE THING, SLUMBER PARTY MASSACRE II, CAT PEOPLE, JAWS 3-D, COCOON and HOUSE. He loosely designed the makeup and monsters to be executed by Bill Corso, a 22-year-old newcomer who had assisted on THE GARBAGE PAIL KIDS MOVIE and THE BLOB and did makeup for Zoobilee Zoo.

The Miss Poopenplatz monster is a classic, with bulging cartoon eyes that puts her in a category with Large Marge from PEE-WEE’S BIG ADVENTURE, some of the things in BEETLEJUICE and the aliens in EXPLORERS. But this is is an animatronic creature that looks almost as big as a queen alien, and it’s very expressive, with the eyes blinking and fluttering those big eyelashes. 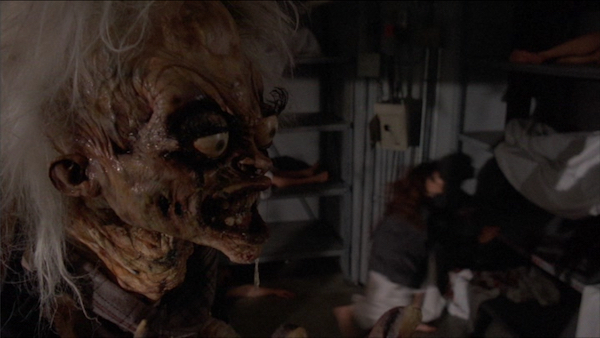 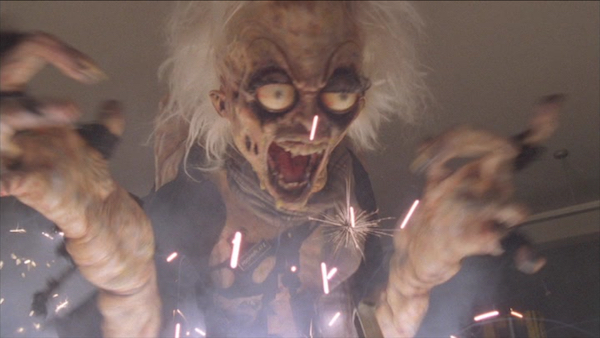 So Miss Poopenplatz and the poodle monster might give you a comedy vibe, but then what do you make of the kyoshis? Look at these fuckin things: 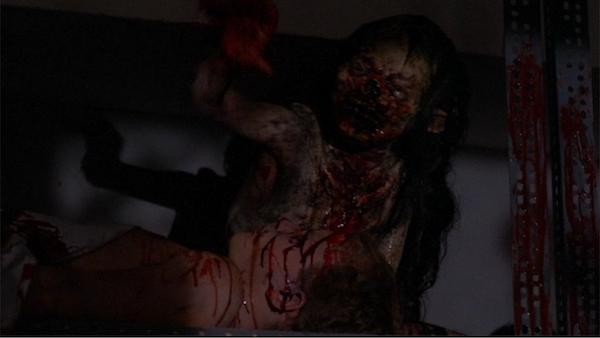 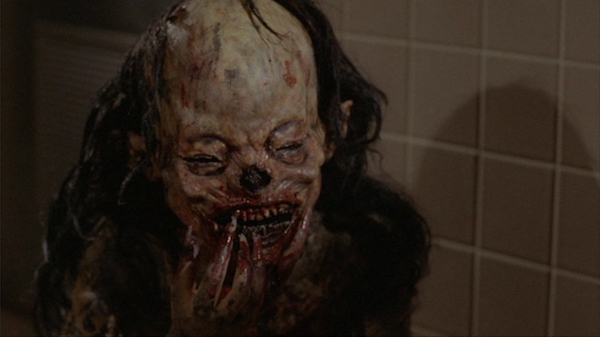 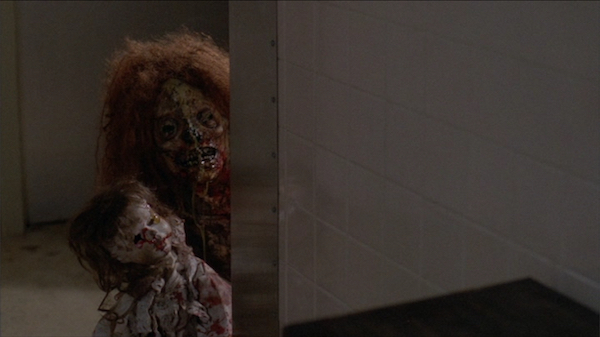 I was really wondering how they did that because these are clearly living people in full body makeup, but they don’t look like little people. They wouldn’t put a little kid in heavy duty makeup like that, would they? Yes they would. The main ghoul (supposedly a boy) was played by a 9 year old girl named Sallie Middleton Kaltreider, who was so much more comfortable in the makeup than the other kids that she ended up playing two other characters too. I know this because she’s interviewed on the DVD at the age of 38 and don’t worry, she’s incredibly proud of it, speaks fondly of the people and the experience, even keeps a scrapbook of articles about all the makeup artists and stuff. She says, “It was the highlight of my childhood. It was so much fun. I would give anything to relive a day on that set.” 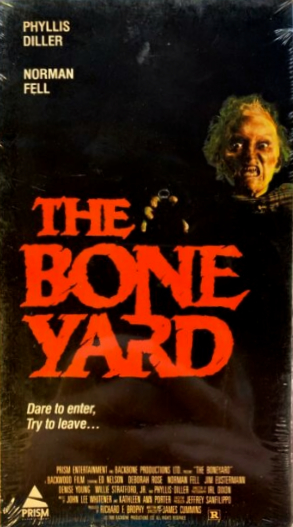 I’m so glad I had a reason to watch this movie, because I think it’s a real gem. It does have some laughs, but I think it leans much more into serious horror than you’d expect from the cartoonier aspects, and that gives it an interesting tone. The unique casting of Nelson, Rose and Diller also makes it feel special; consider that this was filmed in 1989, when they were still making boob/shower/sorority house oriented b-horror. In an article in the September 1990 issue of Fangoria, Cummins describes THE BONEYARD as “a Saturday matinee-type horror film that’s dirt cheap and yet moves fast and is a lot of fun.” That’s about right.

Unfortunately Cummins only did two more movies: DARK:30 (1993) and HARBINGER (1996), before dying much too young in 2010. His co-makeup effects supervisor Corso went on to much bigger movies, about a dozen of them with Jim Carrey and about ten with Harrison Ford. He designed makeup for JOHN CARTER, DEADPOOL, DESTROYER and TERMINATOR: DARK FATE. He was nominated for Oscars for CLICK and FOXCATCHER and won for A SERIES OF UNFORTUNATE EVENTS.

I wonder if he’s ever tried to get Harrison Ford to watch THE BONEYARD? He’s working with him on the new INDIANA JONES, maybe he’ll bring it up on its 30th anniversary.

Note: There are Thanksgiving decorations up, if you ever need a horror movie set close to Thanksgiving.

Bill Corso Deborah Rose Ed Nelson James Cummins Norman Fell Phyllis Diller Summer of 1991 Thanksgiving Willie Stratford
This entry was posted on Thursday, June 10th, 2021 at 12:46 pm and is filed under Comedy/Laffs, Horror, Reviews. You can follow any responses to this entry through the RSS 2.0 feed. You can skip to the end and leave a response. Pinging is currently not allowed.

11 Responses to “The Boneyard”