After I wrote about the ’46 version I listened to the extra on the DVD where Stacy Keach reads the Hemingway story, and it explained alot. That movie was a good mystery, but nothing in the main story approaches the perfection of that opening, the tense scene with the two strangers coming into the diner, talking shit, then taking everybody hostage and saying, “I’ll tell you what’s gonna happen. We’re gonna kill the Swede.” I know now that’s because the Hemingway story is only the opening, the rest is all extrapolated from there. In the story you don’t find out what the Swede did to get killed. Adding a whole story to explain the short story really goes against the spirit of the thing, because to quote Jack Skeleton about Christmas presents, “That’s the point of the thing, not to know.” 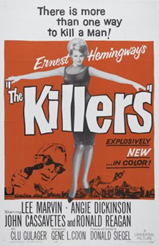 So the rest of that movie is all new material except for taking the detail that Swede was once a boxer. That explains why a movie called THE KILLERS isn’t about the killers – they were making some other movie and just kept the name they started out with.

When Siegel – who had been the producer’s first choice for the ’46 version – came on, he ditched pretty much everything, but made it actually about the killers this time. It doesn’t use that great diner scene but instead has the two killers, Lee Marvin and Clu (RETURN OF THE LIVING DEAD) Gulager coming after Johnny North (John Cassavetes) at a school for the blind where he works. Like the Swede Johnny is not surprised and doesn’t run. But instead of an insurance agent trying to figure out why he didn’t run it’s the killers themselves. To Marvin it doesn’t add up so they head to Miami to investigate this guy and find out who hired them to kill him and why. They figure out there’s a million dollars in it, but Marvin’s more worried about getting answers than getting money.

Instead of a boxer Johnny is a race car driver. Angie Dickinson (POINT BLANK) is the girl he should know better than to chase after. Instead of a payroll heist at a hat factory they rob a mail truck on the road, and the planning is shown in more detail. The gangster in charge, also possessive boyfriend of the girl, is played by Ronald Reagan (SECRET GOVERNMENT: THE CONSTITUTION IN CRISIS). Man, it’s weird to see a president slapping a woman or pointing a gun. I suppose it’s an inspirational thing for filmatists to think about, that some day somebody in their movie could become president and then the movie would take on a much more novel quality that improves it. Good job on that one Don Siegel, you pulled it off. And when Clint became mayor of Carmel in ’86 Siegel was probly like “Who gives a shit? I already directed the president. Fuck you,” and then Clint said, “I was more trying to impress Sergio Leone anyway, why would I care what you think?” and then Siegel says “I HATE YOU!” and storms out and that’s why Clint dedicated UNFORGIVEN to Don and Sergio, to apologize for playing them against each other in that  argument. In my opinion.

The race car scenes mean there’s alot of fake-looking process shots, and like the original I feel like the scenes with the killers are better than the flashbacks that make up most of the movie. But the greatness of the movie is in the cast. Along with the names I already mentioned it has Claude Akins in an outstanding performance as Johnny’s loyal right hand man during his racing career. To see him cry about Johnny’s death after telling the killers his story is heartbreaking. He knew what Johnny was getting himself into but couldn’t talk him out of it.

Even better though are Marvin and Gulager as the killers. This is an all time great team up. Marvin is the guy in charge and Gulager is the weird, crazy one. Marvin gives one of his best tough guy performances (which is saying alot) but also was generous enough to let Gulager do all kinds of business, he’s always doing some weird thing with his sunglasses or something while they’re talking to people. Marvin is serious and Gulager has a strange sense of humor and the combination is very intimidating. And they got no morals, they don’t mind scaring the shit out of some poor secretary lady or somebody. These guys are total bastards but you find yourself rooting for them.

I have to admit I was excited for a second about one of my favorite actors, Lee Marvin, coming after Reagan, both because he’s an asshole in the movie and because of what he represents politically. But then I caught myself and felt like a jerk because somebody actually did come after Reagan with a gun and that’s not cool when it’s literal and not a metaphor. So I apologize for that. But I stand by my enjoyment of the part where John Cassavetes punches him in the face: 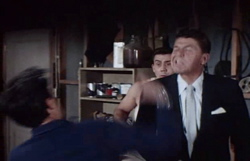 This was Reagan’s last major role before going into politics, which tops Schwarzenegger’s TERMINATOR 3. It apparently took some talking to get him to play a villain, but he was good at it. I didn’t like him as a president, but he obviously had alot of leading man charisma and it’s always exciting to see that turned on its head like this. He’s a pretty creepy villain and not in any of the ways you might see the real Reagan as.

You know what, I’ll say something else positive about Reagan. On one of the DVD extras (I think maybe the excerpts from Siegel’s autobiography) there’s a story about Reagan being livid during rehearsal because the killers kept practicing their parts and the bit player as the secretary wasn’t allowed to do hers. Reagan brought up that he’d been the president of the Screen Actor’s Guild and that he wouldn’t do the scene unless the secretary was allowed to practice too. So maybe he was a nice guy.

This was also the first made for TV movie, and in my opinion it’s better than BABY MONITOR: THE SOUND OF FEAR or all the giant snake, bug and lizard movies they play on the Sci-Fi channel. But to get technical it actually didn’t end up being a TV movie because they decided it was too violent and then released it theatrically. It is pretty brutal for the time and even for now when you see the way poor Angie Dickinson gets shoved around. She must’ve really trusted Lee Marvin to come back and do that again in POINT BLANK three years later.

Siegel wanted to ditch Hemingway. He asked not to use any of the dialogue and had tried to change the title (he definitely didn’t want it to be called ERNEST HEMINGWAY’S THE KILLERS). But despite having even less literally to do with the story than the ’46 version I think it’s kind of a more natural extension of it. Because when you read that story it’s the killers who are the more interesting characters. If the story must continue you want to keep them around. The story ends with the witnesses to the incident puzzling over the mystery of why the Swede would be resigned to his death. That obsession with knowing the answer stays in this version but it’s transferred to the killers. In the ’46 version it was a professional curiosity on the part of the insurance company investigator, here it seems more like Marvin’s faith in the universe has been shaken by the incident and he’s gotta understand it if he’s gonna move on. Which he’s not. (SPOILER.)

There are many great things about this movie, but the greatest on is Marvin. He’s meaner than in POINT BLANK but equally set on his goal, and that makes for one of the all time great death scenes when he’s trying to stumble away with the money when mortally wounded. It’s so obvious he’s not gonna make it – he can barely stand up and the sirens are closing in on him – but he’s not about to give up anyway. Get rich or die trying, I guess. It’s so convincing and it turns out the reason why is because he showed up drunk that day. I don’t know if he did it on purpose but it turned out to be a brilliant approach, the poor guy. Sacrificing himself for our entertainment.

Angie Dickinson Claude Akins Clu Gulager Don Siegel Ernest Hemingway Lee Marvin Ronald Reagan
This entry was posted on Friday, December 11th, 2009 at 8:45 pm and is filed under Crime, Mystery, Reviews. You can follow any responses to this entry through the RSS 2.0 feed. You can leave a response, or trackback from your own site.