So it’s the opening of HALLOWEEN, where a little boy snaps and commits murder out of the blue, except it’s at a drive-in instead of a house, it’s his mom having sex instead of his sister, instead of sneaking up on the sister he sneaks out of the car to kill a stranger, and he uses a small ax instead of a big knife. The biggest change is that he has a twin brother, and after he commits murder he plays a mean trick and leaves his innocent twin standing in shock holding the weapon. So the wrong kid gets locked up. Michael Myers, not having a twin, wasn’t able to pull a switcheroo like that until he faked his death by trading clothes with the ambulance driver in part 8’s unconscionable revisionist flashback to the end of part 7. (SPOILER.)

Then it skips to years later but instead of Halloween day it’s Thanksgiving, a totally different holiday almost a full month after Halloween. And instead of his doctor looking for him for the whole movie she gets killed right away and everybody else is looking for her. 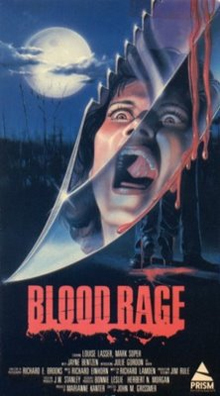 “Well, it looks like you’re gonna get a chance to meet the rest of the family,” Terry announces to the guests dickishly. “My psychotic brother just escaped. ”

So just like Michael Myers is on the loose and headed home for the holidays, so is Todd. But he’s actually not gonna kill anybody. The danger in this one is that him being out has inspired Terry to go on a killing spree, knowing he can blame it on his brother again. He’s not scary-looking like Michael though, he’s just a regular dude in an ugly black and white striped Nike shirt.

Soper does play the brothers differently so you can tell them apart. Terry’s brand of psychotic is the condescending smartass type, kind of a toned down version of the killer from SILENT NIGHT, DEADLY NIGHT 2. There are two different scenes where he sees blood and says “It’s not cranberry sauce!” As Todd he’s a timid, haunted guy that freaks everybody out and makes Terry’s girlfriend think he’s high.

I don’t mind this one taking such obvious inspiration from HALLOWEEN, in fact I kind of like that. But it really reminds you how great HALLOWEEN is, you can’t just take some of the elements and re-create it. In particular the camera work and the music here are not as well-executed as in Carpenter’s classic. It’s just not the same. You gotta know what you’re doing.

Since it’s pretty crappy I appreciate that the filmatist made the effort (or the obvious choice) to be gorier than the movie that inspired it. You’re sure as shit not gonna be scared by this stuff, so at least you get some fun FRIDAY THE 13TH type gags for chuckles. There’s a good body-cut-in-half-with-both-halves-moving scene. There’s a dead body that’s sitting upright and when it gets nudged it not only falls over, its head splits open revealing its brains. There’s a part where a girl sees her boyfriend outside through the peephole, then opens the door to find out it’s just his severed head hanging from a hook. (This one is kind of ruined by the movie not actually showing the view through the peephole.) And a hand that gets cut off and wiggles around while still holding onto a can of beer. That kind of stuff.

I think when they signed on Lasser they thought they had to get her in there as much as possible to show they had a real star in the movie. Most of her scenes seem like stuff that would’ve been deleted in most movies. Once she finds out her son has escaped she spends most of the movie alone in her apartment eating Thanksgiving food, then drinking wine, then on the phone for a long time trying to get through to the hospital. It keeps cutting back to her as if it’s important for us to see all this stuff. Even with that padding the running time is under 70 minutes. Not that I’m complaining. It seems like the right length.

IMDb lists this as a 1987 film, but the trivia says it was filmed in ’83, which I believe because that’s the copyright date on the VHS label. If so that makes it Ted Raimi’s first film other than THE EVIL DEAD (he has a bit part as a guy selling a wide variety of condoms in the restroom at the drive-in. So he banks on dudes at the drive-in being unprepared but not entirely irresponsible).

Two-time director John Grissmer’s previous film was FALSE FACE, aka SCALPEL, in ’77. He produced and wrote a ’73 picture called THE HOUSE THAT CRIED MURDER, which is the movie playing in the drive-in at the beginning (and on the TV later?) Writer Bruce Rubin wrote ZAPPED! and one episode of the cartoon RECESS. He also made his mark by causing the writer of GHOST and JACOB’S LADDER to have to go by Bruce Joel Rubin.

Slasher Search slashers Thanksgiving twins
This entry was posted on Sunday, October 16th, 2011 at 10:21 pm and is filed under Horror, Reviews. You can follow any responses to this entry through the RSS 2.0 feed. You can skip to the end and leave a response. Pinging is currently not allowed.