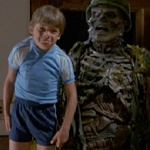 He decides to go stay in his Aunt’s house where he grew up, partly to be secluded and work on the book but partly because he remembers his Aunt believed the house was haunted and had somehow taken little Jimmy. And he’s just low enough to look into that theory. 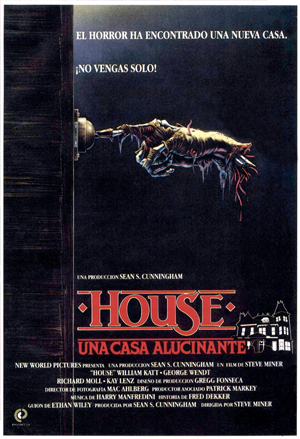 As he sits at a computer and writes he flashes back to the war, but also keeps sensing something in the house, or thinking he sees his son, or noticing things in his Aunt’s weird paintings. He needs solitude to write, but also it’s driving him crazy. After a whole lot of creeping around peeping behind doors and finding nothing he suddenly gets grabbed by a huge roaring mass of misshapen flesh coming out of the closet like a freight train from another dimension. It’s the kind of elaborate latex creation that we never get to see anymore, and its abrupt switch from quiet leave-it-to-the-imagination chills to screaming-in-your-face monster extravaganza exemplifies the movie’s just-right balance of scary and funny.

It actually reminded me of the EVIL DEAD movies. Inanimate objects attacking, resurrected taxidermy trophies (a huge swordfish violently slapping itself against the wall), loved ones turning into hideous, saggy demon ladies, the haunt-ee driven crazy by what happens, burying bodies, a living severed hand, even an important workshed! But it’s not just the content. It’s the humor, it’s the energy.

But it’s probly a coincidence because this is much more openly comedic than the first EVIL DEAD and came out the year before the second one. And one major difference is that it doesn’t happen secluded out in the woods somewhere, it’s in the suburbs in a big house with a swimming pool. It’s in polite society where a grocery boy, a concerned neighbor or the police can come across the craziness. When he’s alone Cobb gets deep into it, dressing up in his army gear, setting up dozens of cameras, but whenever someone else intrudes on his writerly solitude he gets embarrassed, like they caught him playing with dolls or something. He tries to act natural. Too hard to explain.

One of the most intense sequences is when his ex-wife turns into a monster and he shoots it, and it turns back into her, now dead. And now all the sudden our protagonist, who we have been rooting for, is a murderer trying to hide what he did from the police and the neighbor. And he’s not a great liar in my opinion. It’s very uncomfortable.

They excuse alot of his weird behavior because they know he was in ‘Nam. That’s not really why he’s acting that way, but it is relevant to the situation. He’s literally haunted by his experiences in the war. I think it’s used more in a colorful this-would-be-interesting way than a DEATHDREAM war allegory type of way. But I’m okay with that. It works.

Alot of FRIDAY THE 13TH people are involved with this one. Original FRIDAY director Sean S. Cunningham is the producer, Part 2 and 3 director Steve Miner is the director, Harry Manfredini did the score (so it’s good), pre-playing-Jason Kane Hodder is stunt coordinator. But the idea came from Fred Dekker (director of MONSTER SQUAD and NIGHT OF THE CREEPS), who planned it out but didn’t get around to writing it so his friend Ethan Wiley (who more recently wrote the Roel Reine movie BLACK OPS) asked if he could use it. Smart idea.

Ethan Wiley Fred Dekker George Wendt ghosts Harry Manfredini Kane Hodder Steve Miner Vietnam William Katt
This entry was posted on Wednesday, December 3rd, 2014 at 10:10 am and is filed under Horror, Reviews. You can follow any responses to this entry through the RSS 2.0 feed. You can skip to the end and leave a response. Pinging is currently not allowed.