Obviously these brave men and woman man up and make that sacrifice because they understand how important it is to our culture to have 50 different people write up a detailed description of some clips that were shown from RESIDENT EVIL: RETRIBUTION or something. Where would we as a nation be without 2008’s breathless coverage of the TR2N footage, or of course the summaries of the first look at THE WOLF MAN? Not to mention everything these guys uncovered about the early scenes in COWBOYS AND ALIENS before it came out. This is important shit to have described to us. We just read it and then we close our eyes and we let our imagination carry us away to Paradise (as seen in REVENGE OF THE NERDS 2). Or what I do is don’t read it and then wait until the movie comes out a month later and then some of them I see or alot of times I don’t bother.

It sounds like this thing has become more about movies than comic books, otherwise they would’ve stopped doing it after Cathy Guisewite retired. But it seems to still be popular and I’m trying to grow outlawvern.com a little, so I gotta do my best to stay relevant during the Nerdening. Like I said I’m not at the convention (my Shrek costume was at the cleaners) so instead what I’m gonna do is write some reviews on some of the really important cinematic works based on beloved comic strips. In a way I am honoring comics more than the convention is because in my opinion none of the exciting shit there this year (THE MAN WITH THE IRON FISTS, EXPENDABLES 2, PACIFIC RIM) is based on comics. Well, arguably Dolph Lundgren is. 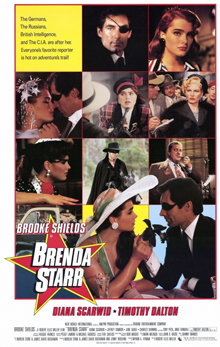 Even if you hadn’t read the title above I’m sure you would’ve guessed that the first review of this mini-series would have to be BRENDA STARR starring Brooke Shields and Timothy Dalton. The titlecular character was created in 1940, one year after Bob Kane started doing Batman, but the movie played in France a month before Tim Burton’s BATMAN, so it is actually the mother of the modern comic book movie, probly. (It was filmed in 1986 right before Dalton became Bond, though not released in the U.S. until we seemed ready, in 1992.)

Shields plays Brenda Starr, a reporter for the New York Flash – a newspaper, not a basketball team. Obviously alot of the hardcore fans are gonna be mad because the comic strip was in Chicago, but some things just don’t translate to different mediums, you know?

This movie plays with mediums, though. When the story begins Brenda is not a person but a mere comic strip character being illustrated by Mike Randall (Tony Peck). He’s just a hired gun on an old established strip, he hates his job and complains about how shitty Brenda Starr, Reporter is as he draws it. Suddenly his drawing of Brenda turns animated and tells him she’s sick of the abuse and she just walks out of the panel, disappearing.

Now he’s worried he’s gonna get fired because he just has plain backgrounds, so he has to draw himself into the strip so he can go look for Brenda and convince her to come back. Now he’s in a live action representation of the comic strip world. It’s like FAT ALBERT in reverse. Or MONKEY BONE. It’s like alot of these great films that we all love.

Brenda is in a fierce rivalry with another female journalist, Libby Lipscomb (Diana Scarwid from RUMBLE FISH and the underrated Burt Reynolds movie HEAT). Both are hot on the trail of a story about an alternative fuel source that could change the world. Brenda meets and falls for the mysterious Brazilian spy Basil St. John (Timothy Dalton). He has an eyepatch, which would mean he was a bad guy in a men’s comic strip but this is a women’s strip so it just means he’s romantic.

There’s also some Russians chasing her trying to get the secret of the fuel. One of them is Jeffrey Tambor (HELLBOY). He’s not Boris and Natasha broad, though probly not as funny as he’s supposed to be. He’s okay.

Mike eventually catches up with Brenda, and at first she tells him to go suck an egg but eventually he gets to go along with her. She complains about the practicality of the small purses he draws for her, he falls in love with the animated stars in her eyes and gets a better attitude about his job. See, he doesn’t do the ENCHANTED thing and try to forge a life long relationship with a cartoon character. He knows to cut it off and return to the real world. And he knows the strip is syndicated in family newspapers so he’s never gonna get any ass. She doesn’t even have a bellybutton.

Since Brenda does not live in the real world she gets to play by her own rules. She has ever-changing movie star outfits (designed by Bob Mackie), she wears high heels while standing on the ledge of a building trying to get the scoop on a holed up gangster, she uses her purse strap as a grappling hook, she water skiis on the backs of two gators. She’s offended by Mike’s use of the word “shit,” he refuses to say “jeepers.” For some reason she decides he’s a pervert. But ultimately they get along. It’s alot like when Paula Abdul was fucking that cartoon cat around that same time.

The movie takes place in kind of an idealized ’40s, and has an enjoyable big band type score by Johnny Mandel (POINT BLANK). The tone is very light-hearted and cute, especially with its little meta gimmicks with the cartoonist character (like when he’s in a diner reading a newspaper and discovers a comic strip about him being in the diner). It even has a slyly retro ignorance of the world, with Brazil being treated as an exotic vacation destination that can be used to make Basil’s background exotic, but mostly bereft of its culture. There is one scene where Mike watches a capoeria demonstration on the beach, though. He pronounces it something like “copweara.”

BATMAN’s Burton was of the young generation of directors trying to find a new approach to this material, but BRENDA’s Robert Ellis Miller was a veteran TV director going back to the late ’50s, so you know it’s gonna be more square. He also did about a dozen theatrical features, including SWEET NOVEMBER in ’68, later remade with Keanu and Charlize. The cinematographer is none other than Freddie Francis, who also did THE ELEPHANT MAN for Lynch and CAPE FEAR for Scorsese, and directed many Hammer movies. 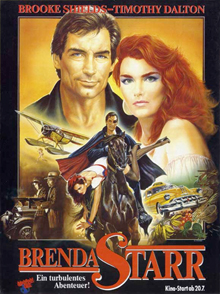 In many ways this is a precursor to DICK TRACY. That’s a better and more visually accomplished movie, but with a similar tone and reality. I guess DICK TRACY is what happens when BRENDA STARR gives it up to BATMAN. Or maybe this is ANNIE without the singing. It’s not as expensive looking as any of these other movies I’m mentioning, and sometimes seems to be using comic strip drawings as a short cut. For example they have a drawing for a White House exterior instead of having to get a shot or pay for stock footage. But I forgave it by the time I realized the scene was about Brenda pumping the president for information while playing a piano duet with him. (I guess they go way back.)

The cast all work well for the material. Shields is actually kinda charming, and her ’80s supermodel looks work well with the character. Of course circa ’86 Dalton is also dead perfect for a mysterious eye-patched globetrotting heart throb. Peck, who is not related to Gregory Peck as far as I’ve ascertained, has kind of an old fashioned look to him too even though I think he’s supposed to come from the modern world. He also kept reminding me of Vincent Cassel.

I’m talking positively about this because I don’t think it’s the piece of crap it has a reputation as. It’s very likable. But I’m not gonna claim it’s good either. I got pretty bored with it and mostly tuned out for the last part. But I sort of like its vibe. I’m not against it.

Brenda Starr was created by Dalia Messick, using the pseudonym Dale so that people would think she had a dick and therefore consider publishing her work. Of course Messick-heads know that she also worked as an illustrator of the Perry Mason comic strip, so obviously her works are pretty much the basis for everything that is considered cool and dope right now in pop culture. It’s a wonder why this isn’t on the Blu-Ray discs or Ultraviolet files.

Unfortunately since they did not complete the trilogy they never were able to introduce Brenda and Basil’s daughter, Starr Twinkle St. John, or deal with the divorce or the son that Basil had with Wanda Fonda. But now that the rulers of Hollywood are these comic geeks you hear about and also because they decided they were gonna remake every movie ever made we should be seeing a gritty new version pretty soon. Daniel Craig will have more of a sleek modern eyepatch I bet. The press materials will describe her as a witty globe-trotting Internet Blogger, like a cross between Lara Croft and Diablo Cody.

Brooke Shields Diana Scarwid Freddie Francis Jeffrey Tambor Johnny Mandel the Nerdening of America Timothy Dalton Tony Peck
This entry was posted on Thursday, July 12th, 2012 at 12:59 pm and is filed under Comic strips/Super heroes, Reviews. You can follow any responses to this entry through the RSS 2.0 feed. You can skip to the end and leave a response. Pinging is currently not allowed.