Also, don’t expect an action movie. There are times when shit goes down, but it is very much a post-action style of failing to film action. Way worse than TAKEN in that respect, so maybe blurry Liam Neeson will eventually be its own subgenre. I’m not convinced that director Joe Carnahan was actually filming images that had anything to do with the particular scenes. It’s possible he took the time to film a puppet wolf attacking an actor, but it might as well have been dirty laundry on the floor of his bedroom or somebody eating garlic fries at a baseball game, because all you see is a shaky smear of closeups on nothing. 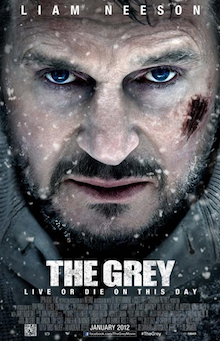 That holds the movie back, but it’s not fatal, because it’s really more about the characters and the mood and a bunch of men out in the cold thinking about death. THE GREY is the story of a group of workers in Alaska who survive a plane crash out in the snowy asshole of the earth and then try to stumble back to safety. While being hunted by wolves. That’s about it.

For what it’s worth this is my new favorite movie by Carnahan. Keep in mind I thought NARC was good but not as great as everybody else said at the time, I really liked parts of SMOKIN’ ACES but thought other parts were terrible, and I probly only enjoyed THE A-TEAM at all because I’m such a kind and forgiving individual. But this one has an unironic macho-ness and a heart-on-its-sleeve quality that I think is very Carnahan and very appealing. It opens with a long first-person narration from Liam Neeson that involves both a love letter to a wife he lost and a poem he likes to recite gravely. And the poem comes up a couple more times in the movie. Also he ignores a ROAD HOUSE sized bar brawl while having a drink, almost commits suicide and holds his hand against a wolf he shot to calm it as it bleeds to death. All in the first 5 or 10 minutes. So I liked this movie.

Neeson was one of the highlights of THE A-TEAM, and he must’ve really liked working with Carnahan because this is not one he could do for the paycheck. It has to have been very personal to him, playing a mourning, suicidal man dealing with death so soon after he lost his wife in real life. It almost makes it uncomfortable, like they’re exploiting his tragedy for a movie, but I think he knows what he’s doing. It’s not like they tricked him into signing on, so it must’ve been meaningful to him.

I’m sure this wasn’t a hugely expensive movie, and there’s an occasional phony background shot, but you can tell it was mostly shot on location. The frozen, windy hellhole that it takes place in feels very real, not artificial. Unlike 30 DAYS OF NIGHT I really felt like these poor fuckers were freezing their toes off every day and that they had gone through the ringer by the end. You see their breath alot and I’m pretty sure it’s not CGI.

That reality is established early on with the little rough edges that make it look more like a place and less like a movie setting. I love the bar he goes to, which is huge and brightly lit like a school gym. You can see why he keeps his parka on inside. But that’s the best place they have to go to out there. And the bumpy plane ride goes on for a long time before it crashes, I can’t remember another turbulence scene that felt that authentic. The actual crash sequence is so terrifying that you just know some motherfucker is gonna make sure it becomes in-flight entertainment.

Well, before long Neeson and several other plane crash survivors are scavenging clothes, alcohol, weapons and flammable liquids from the wreckage and trying to figure out how to not freeze to death. I thought it was funny that Neeson immediately takes charge, and at first nobody questions it. It’s almost like they realize that he’s the lead in the movie. But honestly I think it makes sense and fits the themes, because that’s the type of guy he is, a natural leader. I mean, the first time he sees a wolf out there he calls it a motherfucker and runs straight at it. So he demands respect. If he started telling you what to do you’d probly think “this guy seems to know what he’s doing” too. And of course as the movie becomes more about wolves you realize that he’s the alpha-male leading the pack. And thankfully this is never said out loud by any of the characters.

I also laughed when he started spitting out facts about wolves, that they hunt in a 30 mile radius from their den or something like that. But I have to admit that was unfair, I just didn’t realize that the earlier scene where he shot a wolf was establishing that shooting wolves is his job. He is an expert so that’s why he knows that stuff. It would be funnier if he was just a guy who knew alot of random facts about wildlife. Maybe he reads alot of National Geographic.

Their battle with the wolves is pretty simple. They know the wolves are picking them off one by one, and they hope to do the same thing back. But mostly they just try to head for civilization without getting eaten. They don’t try to build a brick house or anything.

Most of the movie is what happens in between the confrontations with beasts. At its best it evokes my favorite scene in JAWS, the long scene of bonding on the boat that leads to Quint’s famous U.S.S. Indianapolis story. Of course it’s not as good as that scene and the rest of the movie is not as good as the rest of JAWS, but it’s still admirable. It’s a bunch of assholes that don’t know each other real well going through hell together, eventually feeling close enough to talk about their lives and fears, and to laugh a little bit.

I didn’t recognize any of these guys besides Neeson, which was cool. They seemed like genuine guys that would be on that plane. I honestly had no idea until the credits that the guy with the glasses who I really liked was Dermot Mulroney. And Diaz, the ex-con guy, is Frank Grillo, Joel Edgerton’s classical music loving trainer in WARRIOR.

This is about as pure a Liam Neeson vehicle as you could get, merging his genre past and present with his dramatic chops. He gets to be tougher and wiser and braver than everybody else, but also sensitive. He gets to cry macho. He shows you to be hopeful even when you’re obviously fucked. If Grandma had seen this that wolf probly never would’ve been able to steal her clothes.

I don’t know if this movie is gonna go over very well. I heard some people laughing at it at the screening I went to. Maybe Carnahan’s brand of rugged poetic survivalism would’ve worked better with some actual wolf fights. Spoonful of sugar and all that. I sure wouldn’t have complained. But THE GREY has a bleakness and a manliness and a sincerity that works for me, and probly a few others.

BONUS END SPOILER: in case you saw the movie and didn’t stay after the credits, there is a little bit after them. But it seemed to me (and I think intentionally) just as ambiguous about the fate of the two combatants as the part before the credits. Kind of a cute way to tell your audience to go fuck itself. It’s like if after the credits on THE THING they made it seem like they were gonna tell you which one was the Thing and then they just faded to black again.

Dermot Mulroney Frank Grillo James Badge Dale Joe Carnahan Liam Neeson post-action wolves
This entry was posted on Sunday, January 22nd, 2012 at 11:56 pm and is filed under Reviews, Thriller. You can follow any responses to this entry through the RSS 2.0 feed. You can skip to the end and leave a response. Pinging is currently not allowed.