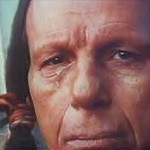 Nah, I’m just fuckin with you. Everybody knows that BROKEBACK MOUNTAIN is “the gay cowboy movie.” Or that’s the hype anyway. So first thing’s first, I gotta tell you that the “gay cowboy” description is utter bullshit and if that’s what you wanna see you’re gonna be just as disappointed as I woulda been if I went in expecting THE OUTLAW JOSEY WALES. Because this is not about gay cowboys. It’s about gay sheperds. They herd sheep. They shepherd. They are gay shepherds. Get it straight, America. Cowboys are dealing with cows and cattle and whatnot. If they herd sheep, they are shepherds. In this case, gay shepherds. 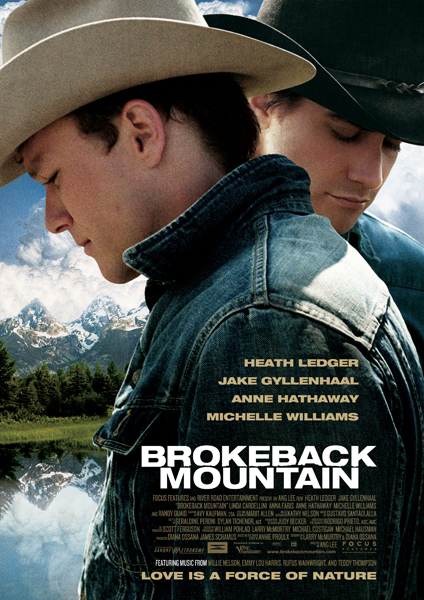 Second thing to say is, this really is a good movie, they are not lying. Ang Lee knows his shit when it comes to gay shepherds in 1963 Wyoming, or giant green radioactive mutants contemplating lichen in the desert, or some guys in a tree fighting over the green sword of destiny, or whatever the fuck he wants to make a movie about. Ang Lee is a guy, you could just toss movie ideas at him and he would hit them out of the park with his eyes closed. Mafia epic. Opera based on the life of Malcolm Jamal Warner. Peewee football tragedy. HAMLET acted out by racoons. If you can describe it, this motherfucker can make a good movie out of it. Don’t even try it. You can’t beat him. It’s like fighting gravity.

Now, I don’t want to be one of those chumps that emphasizes “ALTHOUGH I AM STRAIGHT, I liked this movie, BUT I AM NOT GAY THOUGH” or that type of shit. So sorry if you think I’m a chump for saying this. But the simple fact of the matter is, I like vaginas. I don’t like buttholes. The protruding butt area on a woman is an excellent area, I am not so interested in the actual hole, male or female. That’s just the way I do things around here. And I’m not all that hot on romance movies anyway, or cowboys for that matter, let alone shepherds. (Although Joseph, Jesus’s dad, was probaly a good guy, and a good shepherd.) What I’m saying is, I did not necessarily expect to like this movie on more than an intellectual level, even if it is Ang Lee.

But I did. This is a real effective movie with beautiful atmosphere and relatable human type emotions. It’s a tragic love story between two dudes in cowboy hats. But in a good way. When they’re alone up in the mountains it makes sense to be in love, but they’re soon gonna have to face the fact that it’s 1963, it’s Wyoming, they are working with sheep and riding bulls and crap. Nobody’s gonna let them just be themselves. In trying to live their lives the way they’re supposed to, they both end up with wives and kids. But they can’t help but 2 or 3 times a year get together for, uh, you know, fishing trips.

I’m man enough not to squirm during a gay love scene but I’m sissy enough that it sometimes makes me uncomfortable. That said, this is one of the least gay gay love stories you’re gonna see. Sure you got your buttfucking, you got your men kissing and cuddling. But not all that much. You would have to be a real fuckin wuss to get “grossed out” by the love scenes in this movie. I only mention this because I checked out some of the talkbacks over on The Ain’t It Cool and not only was the anti-gay squad in full force but you also had your “I’m not homophobic but I would never watch a movie about gay faggot cowboys.” Well I am one straight man that had no problem watching these dudes fall in love. Also there was a whole lot of lesbians in the theater and they didn’t seem to have a problem. (they also provided some applause for the boobs of the gal who I guess is from PRINCESS DIARIES. Not Julie Andrews, the other gal.)

Heath Ledger is the main character and the best performance. I had no idea this kid was such an actor. His voice, his posture, his whole demeanor are completely different from what I’ve seen him do before. Gylenhaal does fine, although just adding a mustache and some gray streaks doesn’t make him seem 20 years older. But at least he looks older than Princess Diaries. So good job on that at least Jake, you showed her up. You at least looked like you could’ve been within 15 years of the age you were playing by the end.

Is this some kind of gay issue movie? Kind of, kind of not. I mean obviously the issues here are specific to being gay and in the closet. The tragedy is not just that these guys can’t be together. You feel at least as bad for Heath’s wife Michelle Williams (HALLOWEEN H20). The movie could have a long drawn out secret but instead she finds out at the first possible second what’s going on with her husband and this “old fishing buddy” of his. So alot of the movie is about her pain knowing that this is going on. They can’t be together, their wives are fucked over, they can’t connect with their kids or their parents because of their secret lives, they lose work, they always gotta look out so they don’t get killed by bigots, they gotta waste their lives and gas money driving back and forth to fuckin Brokeback Mountain, and they can’t even completely connect with each other because they can’t agree on how to approach their doomed situation. There’s alot of tragedy in here to go around.

But of course you don’t have to be gay to be interested in this story. Some asshole newsie was saying that 2% of people are gay but movies try to make it seem like it’s common. Well first of all that number has got to be lowballin it like civilian casualty rates, but it doesn’t even matter. How many fuckin hitmen do you know, man? How many undercover cops? How many ninjas, or vampires? I mean jesus, I think it would be okay to every once in a while have a movie about gay people. There’s gotta be way more gay people in this country then there are sheep herders, but I don’t hear your bitch ass complaining about the sheep herding. In fact I can say for sure, in Seattle at least, there are lots of gay people, and not very many shepherds. So if you’re just going on percentages I think the gays are in good shape for earning an Ang Lee movie.

Hell, how many percent do you think care if Grito shot the ewoks first or what Spider-man uses to shoot his magic spiderwebs from? I’m betting there are more gay people in the US then there are people who can name all of the main characters in Lord of the Rings. To this talkbacker guy it’s okay to glamorize the Nerd Agenda online but acknowledging a really well made love story between two men is “rubbing it in his face.” I mean, think through these things you’ll realize all these arguments you’re making, you’re just running around in circles trying to make excuses for something that’s your own god damn problem that you just need to get over. You know what I did, I used to be against “fags” and “fruits” and “fairies” and what not, because that’s the way I was raised. But it’s fuckin 2005 now, almost 2006. Civilization is on the march. You gotta come to a point where you actually think the thing through and realize it doesn’t make any god damn sense. How does it hurt anybody if some male shepherds are doing each other in a tent somewhere, or if there’s a movie about it? I shouldn’t care. Hey guys, come down from the mountains, we don’t care if you’re in love. Love is good. And it’s okay if you don’t really like to fish.

But back to BROKEBACK. When you point out that this is a universal forbidden love type story, people will say “well then why should we care, if it wasn’t gay guys the critics wouldn’t be making such a big deal about it.” Well, first of all the movie is so well made that I think in that magical world where you can create an exact non-gay equivalent to this movie, the critics would like it. More importantly though, alot of times we go to movies to see things we don’t get to see that often. For example, SNAKES ON A PLANE. Everybody wants to see that movie because they never seen snakes on a plane before. Same thing here. If you can name another gay shepherd movie, good job. But I can’t. And how many GREAT or even REALLY GOOD gay love stories can you think of in the films of cinema? I guess I’m not an expert, I’m sure there are many of them but I don’t know of one other than BOYS DON’T CRY. (Don’t fucking say BOUND, that was made for us straight guys and you know it.)

But this really is a universal story. It could be two gay guys, it could be Naomi Watts and a giant gorilla, it could be a cat that falls in love with a mouse. The important thing is the dramatic angle that this cannot possibly work in this time and place, but what are they gonna do, just forget about each other? That’s not working out. It’s not as dark as BOYS DON’T CRY, it doesn’t feel like it’s mostly about hatred. It’s more about societal pressure than straight up bigotry. It shows how not letting these two shepherds just be themselves we’re just making it more difficult for everybody.

Including the sheep. The first night they sleep together, a sheep gets killed because they weren’t paying enough attention. This scene could even work as an anti-gay argument, you could use it as an argument against gays in the military or in the shepherding industry. Or at least, against any stripe of horsin’ around on the job. So homophobes, come see BROKEBACK MOUNTAIN, you will love it as much as anybody. It’s a good movie for anyone interested in love, sheep, mountains, etc.

Ang Lee Anne Hathaway gay shepherds Heath Ledger Jake Gyllenhaal Larry McMurtry Michelle Williams Randy Quaid
This entry was posted on Saturday, December 17th, 2005 at 4:17 am and is filed under Drama, Reviews, Romance. You can follow any responses to this entry through the RSS 2.0 feed. You can skip to the end and leave a response. Pinging is currently not allowed.