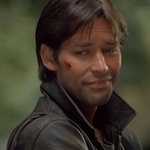 (By the way, I swear I saw this exact same thing happen on CHiPs one time. Were rollerpursesnatchers really a serious problem? I don’t remember.) 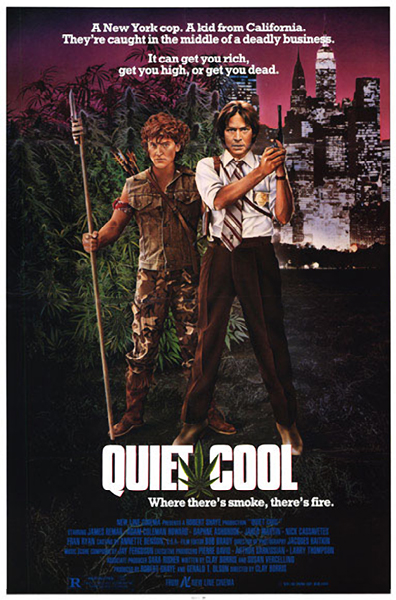 So that was an exciting commute, but once he gets to work he has the boring part, the paperwork. But he’s saved by the bell because right in the middle of that he gets a call from an old girlfriend somewhere in the Northwest who needs his help because she thinks something happened to her brother. She’s right. Her brother and his wife and kid live up in the mountains near a huge marijuana farm, and the kid witnessed a violent takeover of the operation so they killed the parents and threw the kid off a cliff.

When Remar goes into the woods to investigate he discovers the kid still alive, running around like a li’l Rambo and planning a vengeful insurgency against the pot growers. He shoots a flaming arrow at their pot, resets one of their boobytraps to blow them up, and generally shows himself to be pretty useful. He’s also good with a spear.

Remar of course doesn’t want to be involved in any revenge, but he gets caught in the middle and pretty much has to kill them all if he wants to survive.

This is a pretty good action movie, not a great one. The quality comes mostly from the simplicity. It’s not an overly complicated story, there’s alot of quiet and alot of action. His urban motorcycle skills set up some high speed chases in wooded areas, there are various boobytraps and gerryrigged weapons, some explosions. But my favorite part was a funny bit of dialogue. He’s walking by the laundromat and sees a sinister dude (writer/director Clay Borris, PROM NIGHT IV: DELIVER US FROM EVIL) loading a bag of money into a washing machine. Just then the obviously corrupt sheriff appears to try to bully Remar. “Nice night for a stroll,” he says sarcastically. “See anything interesting?”

“Not unless a guy washing a bunch of money is interesting,” says Remar.

I guess my second favorite part would be when he gets pissed at a fat guy with a fancy handlebar mustache (Travis McKenna, ROAD HOUSE, CHEERLEADER CAMP) so he takes some scissor and cuts one side of the stache off. And you know how those guys are with their mustaches, it’s like one of his children was murdered.

The story takes place in a backwards town called Babylon, where laundromat is spelled lawndromat. This might be an insult to rural residents of the northwest, but it’s not really filmed there, it’s filmed in California. So it’s funny that the dad keeps listening to “California Dreaming.” He thinks he’s in Oregon or Washington dreaming about California but little does he know he’s already there.

Since the movie is produced by New Line Cinema there’s a scene where the pot growers are watching A NIGHTMARE ON ELM STREET. They’re gambling, drinking, snorting coke and watching Freddy. That’s some serious sinnin’.

Another funny touch is in a scene with the ex-girlfriend who he’s trying to help, the camera pans down and gets a real good shot of a framed newspaper article that says “ENVIRONMENTAL ACTIVIST ARRESTED AT U.N.” and shows a picture with her in it. It’s like “a ha, this is what will make it all click, suddenly we reveal that she’s an environmental activist.” I’m not sure why that’s supposed to be relevant.

Come to think of it, Remar’s not the cop in the picture is he? That would be funny if it meant they met when he arrested her. I’m not sure what that’s all about. I’m also not so sure about the title. Not only does it sound kind of dumb, but the scene that explains it doesn’t really work. The kid says his dad always talked about “quiet cool,” “a place, but not here, inside yourself. He always said when you find it, you’ve found everything you need.” I don’t get it.

By the way, apparently Nick Cassavetes (director of THE NOTEBOOK) and Ted White (the guy who played Jason in FRIDAY THE 13TH: THE FINAL CHAPTER) are in the movie, maybe as some of the marijuana gang guys, but I’m not sure which ones they are.

The biggest thing holding this movie back is the music. This was 1986 so there is some real abuse of the keyboard bass, drum machine and especially the saxophone. I’m not a fan of action rock. I honestly think if there was a classier, less overbearing score the movie would play way better. But oh well, it’s a nice little understated movie with a part where a guy gets it with the business end of a grappling hook.

special thanks to BW for suggesting this movie

Clay Borris Daphne Ashbrook James Remar Nick Cassavetes Ted White Travis McKenna
This entry was posted on Thursday, March 5th, 2009 at 1:12 am and is filed under Reviews, Thriller. You can follow any responses to this entry through the RSS 2.0 feed. You can skip to the end and leave a response. Pinging is currently not allowed.