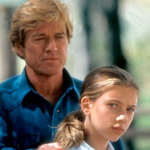 But Annie reads a magazine article about this horse expert in Montana named Tom Booker (Robert Redford [THE HOT ROCK], his first time starring and directing at the same time). When she can’t get him to come to New York she packs up her daughter and horse against their will for a long drive conveyed through the medium of longer-than-expected driving montage. Grace dodges all attempts at conversation and bonding – thankfully the movie doesn’t give Annie any horse troubles on the trip. That would be a nightmare. I don’t know how helpful a horse whisperer is when your psychotic horse gets loose at a truck stop.

Annie is really the main character, which is interesting because she’s easily the least likable one. But she’s also the most complicated. I usually avoid the word “bitch,” but Annie starts out a classical movie version of that word. Her relationship with her daughter is so cold at first that I assumed she was the new, never-accepted stepmother. She’s designed to be grating from the very beginning – the parent who’s out of touch with her daughter, the wife who seems to care more about work than home and husband, the boss who bluntly tells everybody to do things over and leaves the whole staff barely concealing their looks of anger and frustration. On the ranch she causes a major episode when her cell phone causes Pilgrim to flip out, then she obliviously takes the call anyway. At dinner she embarrasses Grace with her talk to ranchers about all steaks tasting the same to her, unaware that she’s dismissing the hard work they do. She is hard to relate to.

Yet she’s the one who makes it happen. She refuses the conventional wisdom that the horse must be put down, stubbornly researches under the rich-person belief that there must be some expert out there you can pay to solve any problem. And she makes life a hell of alot harder for herself trying to work long distance while driving an unruly horse and daughter across the country believing – correctly – that this Tom guy can heal both of them. All three of them.

Do you think it’s weird that both Prince and Robert Redford directed themselves in romances with Kristin Scott Thomas? Do you think she’s proud of her heartthrob auteur track record? 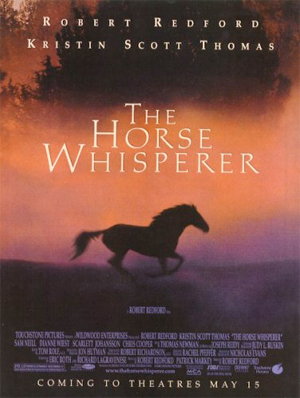 As you’d imagine, this movie is about the glory of the simple country life. The old fashioned men and boys who wear hats and say “ma’am” and get up at dawn and work hard all day and stay up late by the campfire listening to an old cowboy play guitar and sing. Tom is pretty much the greatest man who ever lived – quiet, polite, gentle, empathetic and insightful to both animals and women. So of course over time she comes to be attracted to him. And things were not exactly dynamite at home with her husband Robert (Sam Neill, IN THE MOUTH OF MADNESS, HUNT FOR THE WILDERPEOPLE) otherwise she wouldn’t be able to just up and leave for months.

The romance elements are effective even though the whole idea of it had me cringing. Robert seems like the more reasonable of the two at the beginning of the movie, and it wasn’t his idea for them to be apart so long. There’s a long buildup to when Annie and Tom finally kiss and of course the next day Robert shows up at the ranch unexpectedly. Grace is absolutely thrilled to see him and luckily nobody bothers to look at Annie because she makes pretty much no attempt to hide the worry and discomfort and blue balls he’s causing by being around.

I honestly had to hide partly behind my hand like I was watching a cannibal movie when she slow danced crotch to crotch with Tom with Robert across the room chatting with the locals. (There’s a double-standard where everybody gathers around and is enraptured by his tales of adventure in the outside world, while they always seem to be politely humoring Annie if she mentions anything about her life).

Tom’s sister-in-law Dianne (Dianne Wiest, SYNECHDOCHE, NEW YORK) sees Annie sniffing around Tom and tries to warn her off. Dianne is the only one on the ranch who starts out suspicious and unwelcoming of this uninvited guest, but she’s not a bad guy – she’s right. And she’s nice enough to bond with Annie anyway. Her husband Frank (Chris Cooper, MONEY TRAIN)’s complete dismissal of her dream to travel to Morocco, and her acceptance of it, is the movie’s only strong argument against ranch life being a problem-free wonderland. When Annie defends city living by mentioning museums and theater and stuff she gets sort of shut down by the fact that Tom has experienced those things and still chose the ranch. When Grace looks disgusted by the ranchers pinning down cattle and branding them she’s won over by being made to help. The family’s jokes about city people being vegetarians who only eat salads never get any pushback. But it’s not too much of a conflict. There’s never much more tension than that awkward moment when dinner is served and you miss for a second that oh shit, yeah, they’re gonna pray first.

The first sign that Tom is “only a man,” as Dianne puts it, is when the camera lingers extra long on his hand pressing against Annie’s calf after helping her onto a horse. But upon further analysis this is not only signaling a sexual interest, but telling us his true purpose. When he first went to meet her about helping Pilgrim the camera showed him observing her restless leg shaking as she sat talking on the phone to someone from work. Now his hand reassures the leg much like it would a horse. It doesn’t hurt that she’s been completely removed from the job. He’s calming her just like he is the horse and Grace, and though he’ll be left behind by all three, hopefully his lessons will stay with them.

I think the long running time is really effective. By the end I really felt Annie’s reluctance to leave this place where everything is peaceful and different and she doesn’t have to go back to work. It’s like when you’re at the end of a vacation and you’re halfway convinced you just shouldn’t go home. She at least has been able to get a taste of a life she could’ve chosen if things were a little different.

THE HORSE WHISPERER is based on a 1995 book that sold over 15 million copies. It was the debut novel from English author Nicholas Evans. The adaptation is by Eric Roth (FORREST GUMP, THE POSTMAN, MUNICH) and Richard LaGravenese (THE FISHER KING, A LITTLE PRINCESS, THE BRIDGES OF MADISON COUNTY, BEHIND THE CANDELABRA). Judging from the summary on Wikipedia the movie they stayed pretty close to the book until it totally changes the ending. Listen to this (SPOILERS OBVIOUSLY), this sounds crazy compared to the movie:

Evans named Buck Brannaman, one of the horse trainers he met while researching the book, as the primary inspiration for Tom Booker, so Redford used him as the lead horse consultant and also as a double. So those are probly his hands we see calming the horses sometimes. There’s a documentary about Brannaman called BUCK, which I’ve heard is really good and which won an award at Sundance in 2011. Which is Redford’s festival. Hmm.

The Wikipedia entry is funny for how nitpicky it is about artistic license taken with horse training and psychology. For example it cites Booker wearing a ring while training a horse as “a risky practice in the real world when simultaneously handling a dangerous horse and a rope.” But of course it’s more likely that a viewer will note the story significance of him still wearing his wedding ring than that they will be endangered by an assumption that the movie is a flawless visual guide to horse whispering safety best practices. In my opinion.

Due to its setting and traditional clothing styles, most of the movie does not seem dated. The ranch, with its cowboy hats and “I don’t know how you do things in the big city” old timey family life, is intentionally timeless. But it has to be contrasted with the modernity of their life in New York, so that’s where most of the 1998 slips in. Annie has a fax machine, she uses an Alta Vista search. Grace has a Smashing Pumpkins poster and listens to Liz Phair, Pigeonhead and Sleater-Kinney. At one point Grace is watching 90210 on TV and Tom looks at Jason Priestley like he’s an alien making first contact. Also 1998 means that Annie having a cell phone is a character detail, a sign of her being a self-important bigshot type person. But once she stops using it she exists outside of time.

This will be the most normal grown up drama kind of thing I’ll have in this series, but it would be hard to beat. I guess the competition would be, like, HOPE FLOATS and THE LAND GIRLS? Maybe they’re good too. But the counter-programming seems to have worked okay. It opened second place under DEEP IMPACT (in its second week), above QUEST FOR CAMELOT, and it hung around for a while. In the long run it made more money than more pre-packaged entertainments like LOST IN SPACE, MERCURY RISING and THE AVENGERS. And I’m sure it’s remembered in a more positive light. At the very least it popularized the term “___ whisperer” as in “ghost whisperer,” “dog whisperer” or “ghost dog whisperer.” So it’s had more of an impact than Blarp. Sorry Blarp.

Thanks to Franchise Fred for encouraging me to watch this. Fingers crossed for HORSE WHISPERER 2.

NOTE: BULWORTH also came out on May 15, and I was totally gonna watch it again, but I looked at my review from 2009 and it seems pretty up to date. Some other time, Senator.

Chris Cooper Dianne Wiest Eric Roth horses Kristin Scott Thomas Nicholas Evans Richard LaGravenese Robert Redford Robert Richardson Sam Neill Scarlett Johansson Summer of '98
This entry was posted on Monday, May 21st, 2018 at 8:31 am and is filed under Drama, Reviews. You can follow any responses to this entry through the RSS 2.0 feed. You can skip to the end and leave a response. Pinging is currently not allowed.

19 Responses to “The Horse Whisperer”