Remember THE WARRIOR’S WAY? Kind of an under the radar cowboys ‘n samurais movie from last year, director with no track record, Geoffrey Rush and Kate Bosworth in the cast, hard to know what to expect from that weird combination of factors. I heard it was pretty good, but I also heard it was one of those movies that’s pretty much all done in front of green screens. I almost went to see it for the week or two it was playing in theaters, but I chickened out, waited for the spinning disc.

Turns out I liked this one. I guess I should say something like “it’s a good little movie” so I’m not building it up too much. If you say it’s a good movie that means one thing but if you say it’s a good little movie then the standards are lower. If somebody says what the fuck Vern, you said this was a good movie but I thought it had some flaws such as Kate Bosworth’s old west accent then I can say don’t put words in my mouth, I said it was a good little movie, the “little” signifies that I thought it was quite good but in my opinion I don’t figure you’re not gonna semen in your pants when you watch this one. And they would go my mistake Vern, I’m re-reading it now and you did in fact specify that it was a little movie. I stand corrected. 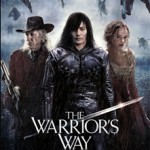 The opening scene is a classical samurai sword duel, but it takes place in an intensified, stylized reality. Yeah, it’s a world of digital paintings, but fortunately it doesn’t look flat, it just looks artistically artificial. The battle is full of intensified details like the sounds of the swords sliding through air or the rocks on the ground being dug up by the swordsmen’s feet as they get pushed around. It’s like you have super-senses, it’s very heightened. Very Zack Snyder, actually, in this specific part. Maybe a little HERO.

Dong-gun Jang plays Yang, the titleogical warrior. The actor is Korean but the character appears to be a samurai. Whatever his specific tradition he’s a sword-guy in an unnamed Asian land where he is doing battle with another individual who some onscreen text tells us is the best swordsman in the world. When our warrior uses his way to defeat and kill the swordsman the text kinda slides across the screen over to him, because now he’s the best swordsman in the world. I really liked that gimmick (although not so much the font) but don’t worry, most of the movie isn’t being cute like that.

In killing the swordsman Yang thought he had achieved his life long goal of destroying his enemy clan. Now he can retire, go to Tokyo Disney, whatever. But no… then he sees this fucking baby. The baby is the last member of the clan. If he wants to finish up he’s gonna have to duel this baby, right? Which is not a fair duel, but neither is life. A warrior’s gotta do what a warrior’s gotta do, so he lifts up his sword and–

–just then a blossom leaf lands on his cheek. The baby sees it. It looks funny to the baby. The baby laughs. Adorable.

Ah, shit. He can’t fucking do it! The baby laughed. He can’t kill the baby. So he takes it.

So there it is, that’s your badass juxtaposition, your LONE WOLF AND CUB homage (well, one of ’em) and also the heart of the movie. This stoic, cold-blooded killer walks around with the baby he couldn’t kill. But he doesn’t know what he’s doing so he carries her around by the back of her shirt, like she’s a cat. Or a bowling ball. Sometimes he ties her to a stick and carries her over his shoulder like a bindle. Or he pins her to a clothesline and lets her hang there while he does laundry. But his clan, the Sad Flutes, feel that he is a traitor for not killing the baby so now they’re trying to kill him, and he has to go west where he thinks he can hang out with an old friend.

Turns out the old friend is dead, so Yang takes over his laundry establishment. The town is called Lode, “the Paris of the West,” and it’s a destroyed former circus or carnival type place. Like with Yang, life hasn’t turned out as planned for Lode. Tony Cox gets his biggest role since BAD SANTA playing the ringmaster, which is kind of like the mayor.

The warrior also meets this lady who works at the laundry place and is played by Bosworth. I don’t have a strong opinion on this generation’s Boz. She’s not as good as the old Boz for sure, at football or acting, but she can be good. I was worried about her doing this accent, and it’s not entirely natural, but she at least has alot more presence and charisma than she did in the Superman movie.  And actually Geoffrey Rush’s accent is weirder. I liked The Boz okay. He teaches her some sword moves – or “Boz cuts” – and she likes the baby and kind of makes it into her Bozkin.

Danny Huston is the type of villain who terrorizes the small town and everybody is too afraid to do anything until this outsider comes and helps them fight back. And also he was the guy who killed the girl’s parents years ago and she’s been waiting her whole life to get revenge on him so she gets gussied up and asks him to dinner for her chance to kill him. All of these things also happen in THE QUICK AND THE DEAD, but that’s because they’re a mix of pretty standard western elements.

THE WARRIOR’S WAY puts a new spin on it by having all this as the secondary problem that the hero gets out of the way relatively early and then has to deal with the more serious problem of his ex-clan finding him and trying to kill him for refusing to kill the baby. They’re mean if you refuse to kill babies. To be fair though he was totally gonna kill the baby before the whole blossom petal/giggling incident. Call him a softie if you want but you gotta acknowledge that he did pull his sword fully intending to cut a baby in half. That’s more cold-blooded than most of us in my opinion. Give him some credit, Sad Flutes.

Jang Dong-gun is in alot of Korean movies including NOWHWERE TO HIDE, SHIRI and TAEGUKGI. I didn’t recognize him, but I liked him. He’s a very stoic character and isn’t supposed to know much English, so he works perfectly. I think he looks a little like Chow Yun Fat, which doesn’t hurt. He does alot of squinting. This movie could die if the warrior wasn’t very cool, but this guy passes the test. When 20 ninjas glide over him like kites he knows what to do, and that’s the type of guy I want to watch a movie about.

THE WARRIOR’S WAY is a generic title, but I gotta respect that they didn’t call it COWBOYS VS. NINJAS. It might be a little forced in putting weird elements together (especially the circus aspect), but it treats it all seriously, it’s not going for wackiness. The stylized look might turn some people off, but I think it’s well done. Beneath the digital sheen it’s the classic themes that make it appeal to me. It’s a samurai movie with a creamy western center. I recommend this little movie.

Danny Huston Geoffrey Rush Kate Bosworth ninjas
This entry was posted on Saturday, July 23rd, 2011 at 1:53 pm and is filed under Action, Martial Arts, Reviews, Western. You can follow any responses to this entry through the RSS 2.0 feed. You can skip to the end and leave a response. Pinging is currently not allowed.

21 Responses to “The Warrior’s Way”