Nic Cage plays so-and-so, college professor, scientist, single dad, widower. His son (not one of the better child actors, poor kid) is attending his school’s 50th anniversary celebration when they dig up a time capsule. They pass out the 50 year old childen’s drawings predicting the future and this kid only gets a creepy paper covered in numbers. That night Nic happens to look at it and notices some of the numbers are 9-11-01. He Googles 9-11-01 (I guess he doesn’t know you’re supposed to “never forget”) and finds out the death toll, which is also right there on the paper. Then, in a montage of drunken code-breaking, he stays up all night doing web research and figures out that the entire paper exactly predicts the dates all the biggest disasters of the past 50 years in order and how many people died in each. And there are more numbers that haven’t happened yet. And one’s coming up in a couple days. Oh shit. 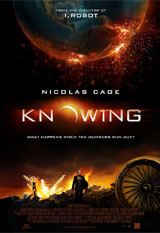 So there’s the concept: he has this paper that tells him when something bad will happen so he tries to figure out how to stop it. Of course, being a scientist, and having suffered a tragedy, and being a character in a Hollywood movie, he only believes in the rational and scientific, he has no religion and does not believe in faith, spirituality or secret codes that predict the future.  We know this because he awkwardly stated as much in an emotional lecture to his class. He believes that “shit happens.” So this preordained-future business challenges his beliefs, as it would any of us who do not believe in magic codes that predict the future.

Isn’t it weird how lectures in movies always tell you either exactly what you need to know about the character or about the threat they are about to face? There’s lots of silly shit like that in the movie, and as good as Nic Cage has been at times he has kind of blown his credibility enough with the NATIONAL TREASUREs and the WICKER MAN (and all those “big” movies that he never could’ve done without Michael Bay plucking him up out of obscurity after he won his Oscar) that just his presence trying to sell a concept like this is kind of funny at times. The poor guy. You just want to laugh.

But then the first big setpiece happens and kicks you pretty hard in the balls. Basically he’s stuck in traffic on the date of the next predicted disaster when he suddenly realizes that the column in the middle of the paper that he hadn’t figured out yet represents the latitude and longitude of each disaster, and that he is exactly at that place. Ha ha, funny, right? Goofy coincidence, now some special effects are gonna happen, should be some laughs. He gets out of his car to ask the police what happened, suddenly the cop he’s talking to gets a terrified look on his face… you think maybe there’s gonna be a pile-up or something but no, a fucking jet is coming down and crashes right nearby.

The scene is all done as one handheld shot (a toast to you, CHILDREN OF MEN) as Nic runs into the wreckage to see if he can help anybody. And sure enough there are some survivors, but they’re running around on fire from jet fuel or something. It’s a total nightmare. Maybe it helps that for years I’ve had dreams about witnessing a plane or a helicopter crashing, but jesus, this is way worse than my dreams, I never had people running around screaming and burning. I watched this movie with a gal who gets a chuckle out of all those Roland Emmerich movies, she likes watching the White House blowup and all that shit, but this was too much for her. Maybe there’s some CGI fire and what not in there but this looks pretty real, this feels pretty real, this is kind of creepy in post 9-11 America, even as we get more and more post 9-11.

Also it brings up another ominous side of the premise: if he saves somebody’s life is it gonna affect the death toll? Or was that already factored in? Also, do the predictions matching up with all the articles he read mean that the official estimates of death tolls are always right, or did the code just not want to confuse things by being picky?

There was one point in that scene that seemed like it was almost gonna go in a WICKER MAN direction, when a guy is running toward him on fire and Nic yells “Hey! HEEEEYYY!!” as the guy runs past him. Like he’s pissed that the guy doesn’t stop to answer his questions. But it was pointed out to me that he was probaly gonna tell the guy to stop drop and roll. Anyway it wasn’t good enough to entirely destroy my ironic distance, but it made a solid attempt. The fucked up scary movie overshadows the dumb one, I think, especially as things progress.

I mean, you get comfortable for a little bit. It kind of turns into a higher budget version of the MIRRORS type of story, where a guy goes around following clues and leads and talking to people to solve the mystery of this ridiculous movie concept. And I give him props for treating it seriously and not joking about it like he does in NATIONAL TREASURE. But the winning blow is the next left turn it takes, when suddenly some weird dudes in a car drive up and give Nic’s son a rock. Then these guys start showing up in the movie every once in a while, standing out in the woods spying on the house and shit, always looking emotionless and not giving a shit if anybody sees them. Are they government agents? Monsters? Robots? Doesn’t matter. Whatever they are they’re some spooky shit that show Alex Proyas still has some of those DARK CITY chops.

What makes the movie memorable, aside from that jet crash scene, is that it really doesn’t go where you expect it to. I won’t say everything but I’m gonna say alot, so if you plan to see it you should stop reading so you won’t end up Knowing. The movie has a nice realistic look to it (apparently shot on digital cameras, the good ones though because it looks great) but there are enough elements to put you in mind of the standard slick Hollywood thriller with this type of premise. He meets a woman who eventually believes in the code and they determine that she is destined to die on a particular day, and what’s worse it turns out a solar flare is gonna destroy the fuckin world.

So you can do the math, you know how this formula works out for the most part. They now know this is destined but they have to figure out the loophole to save the world, and then afterwards Nic will believe in a higher power but also be in control of his own destiny and he, the woman, his son and her daughter will form a new loving family although there may or may not be a hint of future predictions of doom. Right? That’s how it goes.

But Alex Proyas does the math different. In his version there really is no way to stop it. By the ender there are (seriously dude, SPOILER) angel-like aliens and Adam and Eve references on another planet. So I admired the movie for taking me on a crazy ride. I would not have guessed in a million years that this movie would end that way. And I would not have guessed that the hero who lost faith because of the tragic death of his wife would find out that there is a pre-ordained order to the universe… and that there’s nothing you can fucking do about it and you are doomed. That’s not usually the message they go for in these types of movies. Usually it’s “Hey sourpuss, believe in God or spirituality or whatever! Don’t be such a grump!” This one is “you’re wrong, there is a higher power. And it will bite your head off and spit it out. Later dude.”

Also did I mention the fucked up dream sequence where all the animals of the forest are running around on fire? First you see a CGI flaming moose and you might laugh but by the end of the sequence it’s like the hunter not only killed Bambi’s mom, but the entire cast of Bambi. By lighting them on fire.

So in the tradition of I, ROBOT, KNOWING is another not-as-bad-as-it-looked movie from Alex Proyas. One of these days I’d like to see him making truly great movies, but until then I’ll take him as the guy who gets a couple good ones past the suits in mainstream movies.

Alex Proyas Nicolas Cage
This entry was posted on Monday, July 6th, 2009 at 12:36 pm and is filed under Reviews, Science Fiction and Space Shit. You can follow any responses to this entry through the RSS 2.0 feed. You can skip to the end and leave a response. Pinging is currently not allowed.