But this one’s not about the Sami people of Finnmark being invaded by the Tchudes, it’s about Native Americans being invaded by vikings. The idea is that vikings could’ve set up shop here centuries before Columbus, and this is the legend of why they didn’t. 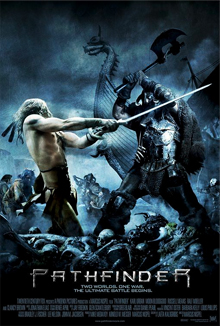 It’s so different from the original movie that at first I questioned whether it was even actually a remake. But there’s definitely enough there that it’s gotta be: both open with text about this being a legend, then a prophecy about seeing a white animal (reindeer in old one, horse in new one). Both are about a guy who was away from his village when everybody got slaughtered by invaders. In both he goes to a nearby village and the invaders follow him there (although in the new one the villagers find him and he tries to warn them away, so he’s not to blame for leading the enemy there). In the old one he criticizes the villagers for fleeing, in the new one he warns them that they better because their wooden spears and stone arrows don’t have a chance against the viking swords and armor. In both there’s a girl from the other village who he has his eye on (in this one he’s older and she’s played by Moon Bloodgood, so he fucks her) and somebody who questions his decision to stay and fight because it’s about vengeance for what happened to his village. In both he tricks some of the invaders into falling off a cliff. Most importantly both have a “pathfinder” who appears to him almost like a ghost to share wisdom with him.

One of the biggest changes is that the protagonist (Karl Urban, the guy from everything) has a whole backstory. When he was a kid he was left behind by a viking ship, so he was raised by Native Americans who named him “Ghost” (the term “cracker” hadn’t been invented yet) and thought he would grow up to be a monster like the “Dragon Men” he was abandoned by. Now he’s trained in the Native hunting and fighting methods but also remembers viking shit from when he was a kid and practices with the sword they found him with. So he’s like one of the original mixed martial artists. Or the Daywalker of Native American viking slayers.

Seriously man, Karl Urban is in alot of movies. He’s in some LORDS OF THE RINGSes, one of the BOURNEs, that movie DOOM, that movie RED. I just saw PRIEST, he was in that. He was in CHRONICLES OF RIDDICK. It wasn’t until STAR TREK that I started remembering what he looked like. Here I think he has more charisma than in some of those and he’s pretty tough looking in a very physical and under-dressed role. But he’s not all the way there to great screen presence. He’s still working on that. So he’s somewhere in between the typical fantasy hero weenie and the good ones like Conan. Probly closer to the good ones. Probly higher up than a Kevin Sorbo level.

The leader of the vikings is played by the great Clancy Brown of HIGHLANDER fame, but you wouldn’t know it because his face is almost entirely hidden under helmet, shadow and beard, and he doesn’t speak English, only subtitled vikingese. The vikings are by far the most ridiculous elaboration on the original tale, and the one that takes the most advantage of Nispel’s particular tastes and talents. These aren’t just dudes in furs and horned helmets, these are fucking monsters. They’re huge and they’re covered in 250 pounds of complicated shit, their helmets look like they’re from outer space and some of them even have electronically lowered voices like Freddy Krueger in part 1. I’m pretty sure they’re all lifted from paintings by that guy that did the cartoon FIRE AND ICE. I mean, look at these fuckin guys: 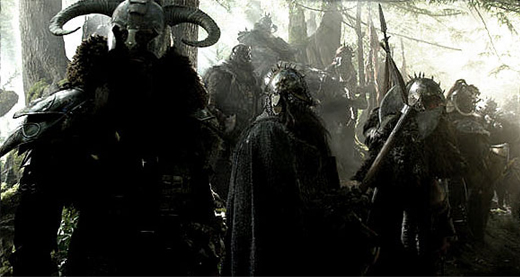 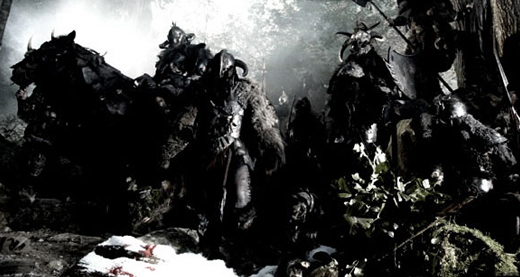 I gotta respect the exaggeration and detail on those beasts. And you can see why the Natives think they’re dragon men (if you can believe they know what a dragon is). It’s kind of like you’re seeing them through their eyes. These roided out viking assholes storm in and start chopping and bashing everybody in sight, they look like they just escaped from the Gwar dimension and, as a nice, sweet, irony-flavored dipping sauce, they consider the peaceful Natives to be “savages.”

I love that touch, but I don’t spot much more thoughtfulness if it’s going on anywhere in here. I don’t think they’re trying to say anything. These type of stories can be read alot of contradictory ways. On one hand you gotta kinda resent that it’s always a white guy as the hero. We can’t just have a Native American character as the hero who stops the invasion, it’s gotta be the one white guy who lives there. And oh, boo hoo, poor white man having such a hard time being a minority, they don’t understand him, what a terrible tragedy. On the other hand, it’s a story about people of different races getting along and learning from each other (and stopping the assholes who don’t want to do that). Also there’s one big change from the ending of the original that acknowledges the contribution of the woman. So that’s good.

Ghost puts up a much more involved fight than Aigin did in the original. He sets an ambush with a bunch of clever and brutal traps. There are plenty of cool action beats, and it’s not too visually confusing for me. But Nispel is not that good of a director so the action scenes have no build to them, they just feel like a montage of the different tricks he played throughout a more sustained battle. It’s like: Ghost jumps out and stabs a guy. Ghost is in a tree and swings down. Ghost is hidden in mud and comes out. Ghost sets off a trap that shoots a bunch of spikes at a guy. Just him doing everything in a row until after a while the script calls for the tide to turn so then the vikings get to do something right. It’s all the story elements just laid out in list form instead of told to you as a story. Which, to be fair, is better than most action scenes these days.

Nispel also seems to have a problem with digital color correction abuse. I’ve been noticing this in a bunch of movies lately – why do they think it’s a good idea to suck most of the colors out so that it almost looks black and white, but not as good as it would look if it was shot in black and white? Alot of this movie is just dreary gray. It seems like it would look so much better if they put some color in the sky or something. But when there is color it’s a really beautiful looking movie. The cinematographer is Daniel Pearl, same guy that did THE TEXAS CHAIN SAW MASSACRE, both the original masterpiece and crappy remake. It would be cool if he did the original version of this too, but I guess that would be asking too much for him to travel back in time and get work in Norway. He was busy that year doing ISLAND OF THE ALIVE, A RETURN TO SALEM’S LOT and AMAZON WOMEN ON THE MOON.

Anyway, Nispel’s directorial weaknesses keep this from being very memorable, but I do think it’s a pretty good mythic warrior type of story in a totally different way than the original. It’s kind of hilarious that they turned that particular movie into this one, but I also don’t really find it offensive in the same way I find some of his other remakes. Obviously that’s mostly because I don’t have the same attachment to the original, but I also think what he’s trying to do is so different from the original that it feels like a separate movie. With TEXAS CHAIN SAW he’s still making a horror movie, but just doing it in a way stupider and more obvious way than the original, in a way that suggests that he doesn’t have any clue what was great in the old movie and doesn’t know he’s doing a shitty job. With this one he obviously wanted to make a big pulpy viking movie and the producers happened to have this other movie he’d never heard of to use as the basic story skeleton. So it helped him more than anything, giving his movie a better structure than it probly would’ve had.

There’s a reason why I watched this movie now. Nispel has that CONAN THE BARBARIAN movie coming out tomorrow. I’ve been seeing ads for it and thinking yeah, it’s not gonna be good like the John Milius one, but it looks like the kind of thing I might enjoy. Except I hate that fuckin director, I hate all his movies that I’ve seen, so I know I’m gonna hate this. I decided I would watch PATHFINDER and then if it was as terrible as everybody said then I would be cured of my desire to go see his CONAN.

Trouble is PATHFINDER wasn’t terrible. It was okay. I sort of enjoyed it. Maybe if the script is any good he might do okay with CONAN? Okay, so it’s, I’ll give CONAN a shot theatrically. That means I gotta decide how many Ds to see it in. I looked it up on IMDb, looks like it was not shot with 3D cameras, it was fake 3D-ified after the fact, a process I’ve sworn off after its mixed success in PIRANHA 3D, its unimpressive use in GREEN HORNET and its downright shitty obstruction of HARRY POTTER.

So regular-D it is. Tomorrow before work I’ll just go and–

Ah, shit. They only have it in 3D downtown. Geez, Hollywood. Do you see how much effort I’m going through just to want to see your movies? You really make a principled moviegoer jump through alot of hoops.

Clancy Brown Karl Urban Marcus Nispel Moon Bloodgood remakes vikings
This entry was posted on Thursday, August 18th, 2011 at 1:01 pm and is filed under Action, Reviews. You can follow any responses to this entry through the RSS 2.0 feed. You can skip to the end and leave a response. Pinging is currently not allowed.