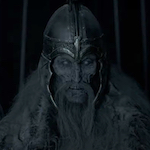 It has a basis in Icelandic folklore, especially versions of the story of Amleth, which inspired Hamlet. Eggers wrote it with an Icelandic author named Sjón, who wrote REYKJAVIK WHALE WATCHING MASSACRE and LAMB, but also grew up with Bjork, co-wrote some of her songs and performed with The Sugarcubes under the name “Johnny Triumph,” so he got her to have a cameo as a prophetic witch or whatever. A significant casting coup there in my opinion. She doesn’t act that much but it would be cool if this gave her the bug again and then she got to be a villain in FAST X or something. END_OF_DOCUMENT_TOKEN_TO_BE_REPLACED 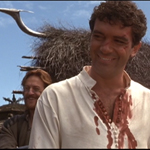 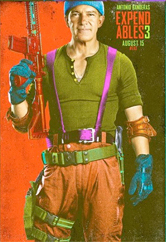 Well, I guess it’s not exactly a nerd-in-gym-class scenario, they do want him. He’s drafted against his wishes. But not like he’s some John McClane type reluctant hero. He doesn’t want to go because he’s unqualified. He’s not a warrior, he’s an Arab poet who got too flirty with some caliph’s girl or something so they made him an ambassador and sent him packing, the poet equivalent of the alternate ending of TO LIVE AND DIE IN L.A. where he gets transferred to Alaska. Ahmad ends up hanging out with these “Northmen,” or vikings. Their king has just died and gone to Valhalla to kick it V.I.P. (vikings in paradise) style, but Ahmed is taken in by the heir apparent Buliwyf (Vladimir Kulich), shown some of their ways and pushed into service with this dirty baker’s dozen on a mission to protect a village that’s been attacked by monsters that come from the fog, ravage villages and tear off people’s heads. And they take the heads with them when they leave. Choppers keepers. END_OF_DOCUMENT_TOKEN_TO_BE_REPLACED

Before long he’s free and traveling toward “home,” wherever that is. He tells people he came from Hell, and he’s such a scary motherfucker they tend to take that literally. Actually, he doesn’t say a word, but a little boy accompanies him, speaks for him, and names him “One Eye.” “Well, you need a name,” he explains. “And you have one eye.” END_OF_DOCUMENT_TOKEN_TO_BE_REPLACED

But this one’s not about the Sami people of Finnmark being invaded by the Tchudes, it’s about Native Americans being invaded by vikings. The idea is that vikings could’ve set up shop here centuries before Columbus, and this is the legend of why they didn’t. END_OF_DOCUMENT_TOKEN_TO_BE_REPLACED

It’s gotta be hard living under the shadow of Tarantino, because #1 nobody can really live up to him and #2 the chin part of the shadow is just gigantic (wocka wocka). But I think Avary’s got some talent.
END_OF_DOCUMENT_TOKEN_TO_BE_REPLACED

Oh well, at least it snuck out. The cover art is pretty cool too, and it uses one of those critic quotes that isn’t really a compliment but just a description: “PREDATOR meets BEOWULF.” And that’s accurate. A space ship crash lands in Norway, 709 A.D. A survivor climbs out wearing a space suit that looks alot like a suit of armor (surprisingly that doesn’t come up again later). He’s Jim Caviezel, and I wasn’t sure at first if I was gonna accept aliens that look just like humans, but when he looked up Earth on his computer it said we were an “abandoned seed colony,” so I guess we all come from the same place. Brothers from a different mother. END_OF_DOCUMENT_TOKEN_TO_BE_REPLACED