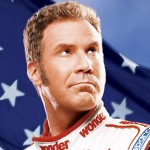 RABID is typical of Cronenberg’s early work, because it’s about a girl who gets all worked up and bites people to death with the vagina she has in her armpit. FAST COMPANY is the least typical of all Cronenberg movies because it’s about funny car racing. That wouldn’t be a surprise if they were funny cars shaped like vaginas, but these are just regular funny cars with wheels and seats and everything. Driving fast. On race tracks. Etc. 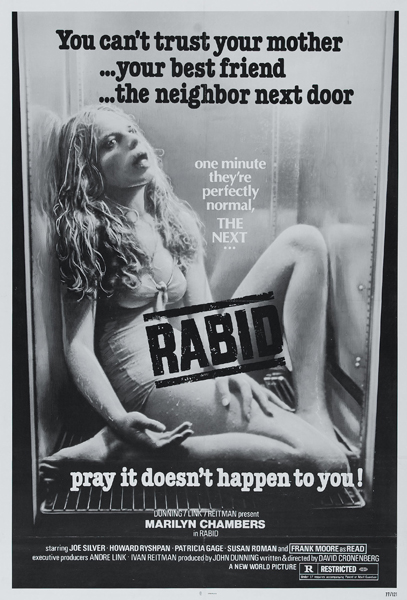 RABID is alot like SHIVERS, an uncomfortably strange horror movie with a freaky venereal disease, and with a little bit of making fun of the Canadian bourgeoisie of the ’70s. SHIVERS took place in a fancy highrise apartment complex, this one is at a plastic surgery clinic. Marilyn Chambers (whose work with John Holmes we are all very, very familiar with, obviously) plays a woman in a fiery motorcycle accident and she could die before they could get her to a real hospital so they bring her to the plastic surgery clinic, and those assholes try to show off and do some experimental business on her and it’s a long story but basically it grows into the biting vagina armpit deal I mentioned earlier. No, they do not intentionally graft a vagina onto her armpit, but they do cause it to grow there. See, politicians always complain about “frivolous lawsuits” but in my opinion doctors gotta be accountable for this shit. You grow the armpit vagina, you pay up. Simple as that.

(By the way did you notice I looked up how to spell bourgeoisie correctly? Then I totally just dropped it in there. But now that I looked it up it turns out it doesn’t mean exactly what I thought it meant, so I should’ve just said upper middle class. But that was so awesome when I dropped bourgeoisie in there, so fuck it, I’m keepin it.)

Marilyn Chambers is actually pretty good. She’s known for movies like BEHIND THE GREEN DOOR and INSATIABLE 1&2 but this movie shows that she could work as a legitimate actress, with lines and without penetration. She didn’t really pursue it though, I guess she figured once you worked with David Cronenberg and had an armpit vagina and whatnot there’s nowhere else to go but to a gym where John Holmes is working out and one thing might lead to another.

If you like a bleak ending this one will float your boat (spoils) because the credits roll over a shot of some workers in biohazard suits finding her body in an alley and crushing it in the back of a garbage truck. Real casual, just your average afternoon for the working man.

You can see Cronenberg getting slicker with the cameras and shit, this definitely is a nice looking movie, much easier on the eyes than SHIVERS. But I think I still enjoyed SHIVERS a little better. I think it’s because as weird as this one is it seems a little closer to a normal horror movie because it’s mostly about young people and dangerous women that get picked up and then kill a dude. SHIVERS seems a little less traditional with its middle aged doctor as the lead, and not trying to kill anyone, just trying to survive. But they’re both good if you’re looking for a ’70s horror movie that clearly needs therapy.

By the way I never mentioned that SHIVERS, and RABID too, are produced by Ivan Reitman. You know, that guy that did GHOSTBUSTERS. And now that I think about it that marshmallow man thing really didn’t make sense, that must’ve been shoehorned in there in the eleventh hour. Obviously the Ghostbusters were supposed to fight a giant armpit vagina, which would’ve made alot more sense. One can only imagine how cinema history would’ve unraveled differently if they would’ve been allowed to do that movie up right. I think we’d be looking at a whole different landscape here. Stay puft, everybody. 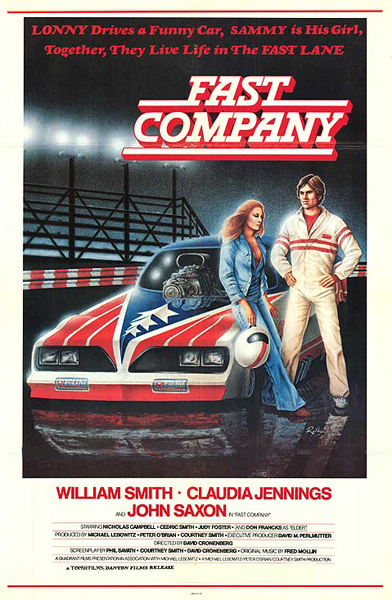 If you’re like me you were surprised when you found out about FAST COMPANY. Right between the armpit vagina and the killer little bastards he makes a completely normal movie. And not normal like THE FLY or the recent Viggronenberg period where it passes for normal on the surface but has some weird Cronenberg mutated DNA inside. No, this is a normal movie, for normal people. But it ain’t half bad.

Maybe it’s unfair but we always think of Cronenberg as a freak. If I had to guess what his hobbies are I would say collecting defective gynecology tools, filling up antique light bulbs with spider legs, and fashioning pocket-sized collage scrapbooks out of crime scene photos and medical diagrams. But in the ’70s at least he was into motorcycles (that’s why he did that motorcycle accident in RABID) and it turns out he was into race cars too. So don’t worry, this isn’t some movie he did for the money and is embarrassed of. On this DVD he says he considers it as much a statement of himself as his other movies and seems kind of confused about people thinking it’s weird that he did it. You’d never guess it was his movie but it’s important in his evolution because you see his filmatism getting more confident and he met alot of his longtime collaborators here. It’s a nice looking movie with some exciting race scenes, some fiery accidents, and a climactic funny car vs. small airplane duel.

In a way it reminded me a little of Romero’s KNIGHTRIDERS. It works as a parallel to independent filmmaking as the corporate sponsor (my man John Saxon) won’t give enough money to make the engine they need, tells them it’s not about winning but about selling his Fastco engine product, jerks around with replacing his racers, etc. But I don’t think Cronenberg really had enough experience yet to be frustrated into making a movie about that. Those things just happen to be universal, they happen in movies and in racing.

The cheesiest part of the movie is the music, lots of montages to rock songs. But I guess they fit the subject matter. In fact, it could’ve been alot worse, I’m guessing some of the funny car drivers aren’t exactly listening to the type of music I like.

The best part of the movie is the performance by William Smith as the aging, legendary racer Lonnie “The Lucky Man” Johnson. Smith is a character actor in a couple hundred b-movies and TV shows but I don’t think he’s played too many leading men like this. Here he even gets Claudia Jennings as his girlfriend.

It’s an appealing story with what seems like an authentic feel for the scene and the bonding between the different racers, including the competitors, although things turn bad at the end. There’s some pretty broad comedy, but not too bad, and it’s hard not to like even the obvious stick-it-to-the-man button pushing like when the Lucky Man does an interview and claims to drink Fastco to keep himself regular. My favorite parts are smaller character moments like The Lucky Man giving advice to his rival The Blacksmith, or the team all giving their farewells before splitting up for a long drive to their next destination. But I also like the (sort of tacked on) action bits. John Saxon has established that he likes to travel by plane in order to keep a distance from the drivers he lords over, so it’s only appropriate for the climax to involve a funny car going after the plane.

FAST COMPANY apparently never got much of a release back in the day, but just because it’s Cronenberg Blue Underground put together a nice DVD. Since it’s obviously for completists they also included Cronenberg’s two early underground movies you always hear about, STEREO and CRIMES OF THE FUTURE. I would’ve reviewed those but I gotta be honest, I couldn’t get even ten minutes into either one of them. Based on those early minutes they both seem to be pretentious amateur movies about dudes walking around on college campuses. A million artsy dipshits have made those exact movies on college campuses around the world for decades. Who would’ve guessed one of them would turn into David Cronenberg? That’s good news for the world, but don’t tell those guys that make movies like that because it will only encourage them.

Claudia Jennings David Cronenberg Ivan Reitman John Saxon Marilyn Chambers William Smith
This entry was posted on Sunday, November 11th, 2007 at 9:25 pm and is filed under Horror, Reviews, Thriller. You can follow any responses to this entry through the RSS 2.0 feed. You can skip to the end and leave a response. Pinging is currently not allowed.

4 Responses to “Rabid and Fast Company”