Have you guys noticed that Paul Bettany looks like Peter Weller? I noticed that while watching this. Bettany plays an unnamed priest. This is a new one based on some Japanese comic book, it’s not that Miramax movie about the child molester. I don’t know if that’s a big problem in the world this takes place in, ’cause these priests probly don’t work with kids that much. See, an animated prologue (a much better one than in JONAH HEX) explains that humans have always been at war with vampires, not the Dracula kind but naked CGI monsters with no eyes that jump around on all fours. So the church created an order of “priests,” vampire hunters recognizable by the cross tattoos on their faces.

Eventually the priests won the war, cleared out the vampire hives and locked the remaining fuckers in underground “reservations” surrounded by a protective layer of desert. Then the church got scared of the super weapon priests they made and disbanded the order, leaving them with no purpose and with conspicuous face tattoos. Hard to interview for jobs with that. That thing would be a bitch to get off, so you better make sure you really believe it. If not you’re gonna have to be a juggalo or the Ultimate Warrior to cover it up.

But this is the story of this particular Priest finding out his daughter got kidnapped by vampires. He tries to get the Vatican (Christopher Plummer) to put together a team or call James Woods or somebody, but they refuse to authorize it because their official stance is that there are no vampires left to worry about. Priest goes by himself, even though he’s told “To go against the church is to go against God.” 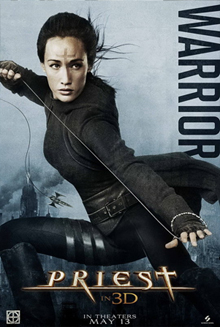 On his rescue mission he takes the young sheriff who told him about the kidnapping (Cam Gigandet, bad guy from NEVER BACK DOWN 1) and is later joined by Maggie Q (LIVE FREE OR DIE HARD) as another Priest who gets sent to stop him, but chooses not to. I like how they have what would be a love type relationship in most movies, but they’re priests so there’s no scene of them surrounded by candles making gentle no-boobs-showing love. Instead they consummate their love with motorcycle action.

There’s alot of cool shots of these long, futuristic motorcycles hauling ass through the desert, that’s probly my favorite imagery in this one. And the best action involves Maggie Q on her motorcycle chasing a train or off her motorcycle fighting some guys who are still on theirs. There’s a little part I dug where Gigandet jumps from his bike onto a train, and before he continues with his mission he takes a second to look over his shoulder and watch his motorcycle crash and flip around.

At its best it’s a western, a story about a quiet killer in a lawless land trying to do the right thing. And it’s got all the western trappings besides horses. Little gas-powered towns with sheriffs trying to stop outlaws. I wonder how long it has to be after a nuclear apocalypse or vampire plague before everybody agrees hey guys, let’s live old west style again. We’ll wear cowboy hats and other old timey clothes, we’ll have a train, we’ll have Brad Dourif as a snake oil salesman. It’ll be awesome.

Most of the vampires are naked digital bugaboos, but the main villain gets to be live action and wear a black hat. Karl Urban plays a Daywalker responsible for the kidnapping, a new step in the evolution of vampires (like they always have in these things). The vampires also have Marilyn Mansony “familiars” to do their work. (It’s illegal to be a familiar, but the law goes unenforced. Probly unconstitutional anyway.) Having these humans around is useful to the movie, but whenever they’re fighting the vampires proper it has that old CGI problem – they look pretty good, but they don’t feel right. They constantly jump and flip, they do everything fast, agile and light, while roaring into the camera. Eventually CGI characters gotta be about what’s best for them to do, not what’s possible. Listen to Jeff Goldblum, whatever that was he said about you shouldn’t make dinosaurs.

I don’t know, maybe that extra weight and grit of fighting actual on screen humans is what this movie is missing. I feel like it’s almost there. We’ve seen similar ideas in other movies, but I like this configuration. It’s simple enough in plot and dialogue, it has pretty good iconic characters, a very dramatic score by Christopher HELLRAISER Young, a serious tone, a short and sweet running time. And yet it mostly doesn’t work. It feels too dull and lifeless at the center.

The director is named Scott Stewart, an effects guy (not surprising) who previously directed LEGION. Here’s everything I remember about that movie: creepy crawly CGI demons, Lucas Black, a diner, Paul Bettany was a heavily armed angel, I think God might’ve been the bad guy. My overall impression was a muddled and stupid movie with occasional bits of “that was kinda cool.” If I had to guess I would say this one is probly closer to working because it’s more focused and streamlined. And Bettany’s character looks cooler, maybe. But that one might’ve been a little more original, I don’t know.

I’ll say this for PRIEST: the last time I tried to watch a movie because Maggie Q was in it it was just a couple weeks ago and it was called KING OF FIGHTERS. It had Ray Park as the bad guy and it was about some kind of fighting tournament where they put in ear pieces that bring them to another dimension to compete in battle. And somebody’s trying to steal a magic sword or something. As soon as it started I realized it must’ve been based on a video game, and soon after I realized it was the exact same premise as MORTAL KOMBAT except with every single entertaining or somewhat entertaining aspect removed entirely. It was just too boring. I didn’t even make it halfway through.

In PRIEST Maggie Q has a smaller role, but I watched the whole thing. Congratulations to PRIEST and Maggie Q. You earned it.

Brad Dourif Cam Gigandet Christopher Plummer Karl Urban Maggie Q Paul Bettany post-apocalypse Scott Stewart vampires
This entry was posted on Monday, August 29th, 2011 at 11:49 am and is filed under Action, Comic strips/Super heroes, Reviews, Science Fiction and Space Shit. You can follow any responses to this entry through the RSS 2.0 feed. You can skip to the end and leave a response. Pinging is currently not allowed.