Yeah yeah, I know my movie history, so you don’t have to flood me with emails pointing out that the great visionary McG already connected the first shot of C’S As 1 to whichever studio logo it was. But this is a different thing because the movie has already started, and then we get the logo within the movie. If we are to follow our understanding of standard cinematical language, there may really be giant letters orbiting around Mars within the reality of DOOM. It all takes place indoors, so there’s no way to know if there are giant UNIVERSAL shaped shadows dripping across the landscape. 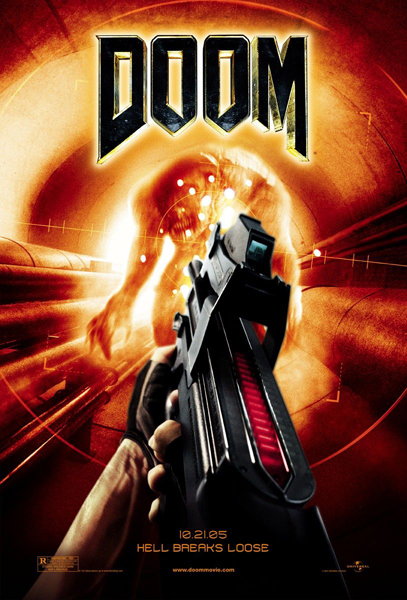 The number two clever sequence is the one you maybe already heard about, the climax of the movie. It’s a five and a half minute sequence that is a continuous shot from the point of view of the hero (Karl Urban), running through space colony corridors shooting monsters that pop out like it’s a Halloween haunted house. Alot of his opponents are just dumb zombie dudes but there’s also a variety of monsters from rubber costumes to computer animation, and weapons including guns, grenades and a chainsaw. (Apparently the video game the movie is based on is famous for being first person like this, so that’s where the idea comes from. they sure have come a long way since Pac-Man in my opinion, although the stupid thing about the POV concept is that you can never do a MS. DOOM, because how are you gonna know if you’re wearing a bow and lipstick?)

Number three, the end credits, the type that seem like they were designed for the opening but tagged onto the end instead so the movie can get down to business faster. These are computer animated and are also a continuous POV shot going through corridors shooting things. Only instead of shooting monsters, you’re shooting the credits, blowing the letters to bits. This was maybe a little redundant after the other POV shot but I still thought it was the funniest credits since FREDDY VS. JASON was carved into flesh and then exploded. And it raises the same questions the Universal logo did. If the characters had stuck around longer, would they have eventually been attacked by flying letters? Maybe that’s why they travel to Mars using a portal called “The Ark” instead of space ships. All the manned missions to Mars kept colliding with giant flying letters. Those things are big enough to wrap around Mars, you don’t want to bump into those.

Unfortunately all three of these sequences I’ve talked about were probaly directed by somebody other than DOOM’s director Andrzej Bartkowiak, and his chunk of the movie doesn’t seem to be making the same effort to be inventive. Bartkowiak is the cinematographer who previously directed the Joel Silver Players Trilogy of ROMEO MUST DIE, EXIT WOUNDS and CRADLE TO THE GRAVE, which were all done in a similar ridiculous style. Here, since he doesn’t have Tom Arnold and Anthony Anderson in the cast (they were the R2D2 and C3PO, or the Rosencrantz and Guildenstern, or the Salt and Pepa of that other trilogy) he creates an entirely different visual universe. One that is probaly trying to seem legitimate and tasteful. But what it really is is just subpar ALIENS ripoff number three hundred and sixty seven. No wonder James Cameron thinks he’s king of the world when a damn sequel he made has squirted out an entire genre.

I wasn’t surprised that this wasn’t a real solid sci-fi action spectacular, but I guess I was a little disappointed that it wasn’t completely ridiculous. Remember, this director’s last movie had a sequence involving a search for a ring, gladiatorial combat in a cage, a midget, Jet Li, parking garages, and an entire team of uniformed professional motorcross drivers trying to get a 4-wheeler back from DMX. So I thought he might bring that same insanity to the sci-fi genre. Unfortunately, it turns out, he knows how to make a normal movie.

The Rock plays Sarge, the commanding officer of a group of marines sent to the quarantined section of a scientific outpost on Mars to figure out what happened to some dead scientists. I guess alot of weenies (which is what serious video game players call themselves, I’m told) were upset that the marines fight scientists mutated into monsters instead of DEMONS FROM HELL. I’m pretty sure demons from hell would not have saved this movie, but I guess it would’ve been a little more different from ALIENS. They coulda had some more horns and fire and shit. Maybe a goat head.

If you’re one of these people upset because the movie isn’t exactly the same as the video game, keep in mind that this is by far the most faithful adaptation Bartkowiak has ever done. You want a good laugh, read the gritty police corruption novel Exit Wounds by John Westermann and then watch the Steven Seagal movie Bartkowiak made out of it. CRADLE 2 THE GRAVE was originally supposed to be a remake of Fritz Lang’s M. And I am not shitting you, look it up.

Anyway, the marines go in there and all the things you expect to happen happen. Some monsters appear behind them in the dark, some of them get tossed around, some of them get infected and turn into zombies and/or monsters. Some of the supporting characters are really annoying, especially the cynical asshole character, sort of a poor man’s Gary Busey standing in for Bill Paxton. You gotta wonder, if they’re going on an important mission like this shouldn’t they take a team of fully trained, non-asshole marines? There must be some other ones to choose from than just these fuckups. In ALIENS Bill Paxton is an asshole but you like watching him because he’s a funny character. This guy you wish could die before the movie starts. At one point he announces “I have to take a dump” and it seems like in the grand tradition of Elvis and the lawyer in JURASSIC PARK he’s gonna die on the john. But then he doesn’t and they drag the scene on, keeping you in suspense about when we’re finally gonna be spared of this fucker.

You know what, this is a movie that could’ve used LL Cool J.

The Rock is good though, as always. Poor The Rock. He could set the world of cinema on fire but instead he does DOOM. I’m sure he had fun though, he finally got to do a rated-R movie. He fights monsters. A couple times he uses a gun almost as big as his torso. He turns into a bad guy who talks mean and does things that are morally indefensible. And at the end he has a fight scene while slowly transforming into a monster. That seems like it’s supposed to be a surprise twist, but since The Rock talked about it in every interview I saw of him promoting it, I guess it doesn’t matter. It’s like I always say, “If The Rock don’t give a shit, I don’t give a shit.”

Unfortunately, there’s not really much reason to give a shit about this movie. It’s not good enough and worse, it’s not bad enough. Even the makers of the movie realized this because there’s an option on the menu to just watch the “first person shooter” scene, kind of like how the Friday the 13th dvds have a “jump to a kill” option. I woulda included the Universal logo and end credits in there too but maybe we’ll have to wait for the Unrated Second Unit Director’s Cut.

Andrzej Bartkowiak first person POV Karl Urban The Rock
This entry was posted on Sunday, April 2nd, 2006 at 4:37 pm and is filed under Action, Reviews, Science Fiction and Space Shit, Videogame. You can follow any responses to this entry through the RSS 2.0 feed. You can skip to the end and leave a response. Pinging is currently not allowed.