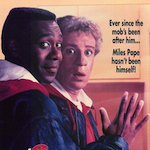 So here we are three years later and Lane is directing a major Touchstone Pictures comedy with the very mainstream premise “What if a Black guy had to pretend to be a white guy?” It stars the British comedian Lenny Henry (BERNARD AND THE GENIE) and is written by Andy Breckman, a (white) Late Night With David Letterman and SNL writer who had scripted MOVING, ARTHUR 2: ON THE ROCKS and HOT TO TROT. END_OF_DOCUMENT_TOKEN_TO_BE_REPLACED

But I had reason to be suspicious of its reputation. Many of Harlin’s ‘90s movies, particularly his also-starring-Geena-Davis followup THE LONG KISS GOODNIGHT, deserve more credit than they got at the time. And there’s definitely precedent for mob mentality panning of movies that have been heavily covered as over budget, out of control productions. This had the additional gossip-bait of the star and director being married to each other, causing mean-spirited speculation that one was only hired because of the other one’s clout. (For example, an informative 1996 Independent article about what went wrong manages to refer to them as “Renny Harlin and his demanding wife.”) On top of all that, you know how it is with what I call the Old Timey Adventure genre. They almost always lose money, even when they’re great. That’s just how it is. END_OF_DOCUMENT_TOKEN_TO_BE_REPLACED

Alan (Gregory Smith, HOBO WITH A SHOTGUN) is a maybe 14 year old kid who works at his dad (Kevin Dunn, MARKED FOR DEATH, also in GODZILLA, ALMOST HEROES and SNAKE EYES that summer)’s toy store, one of those ones that only sells wooden blocks and airplanes and shit, nothing based on cartoons or movies (so there’s not an anti-GODZILLA in-joke here). His dad actually has a specific “no war toys” policy. But one day his friend the delivery driver (Dick Miller, of course) has another store’s shipment of new high tech talking action figures called the Commando Elite. Alan thinks they would sell better than Lincoln Logs or whatever and convinces him to let him take a set. END_OF_DOCUMENT_TOKEN_TO_BE_REPLACED Where he gets this technology is not really spelled out, but his only parental interaction during the movie is a voicemail from his dad telling him he loves him and that “Business is going well here. I wish you were here with me to see all the new equipment.” His mom died in front of him when he was a kid. It still haunts him, and is implied as maybe the reason he’s so attracted to the morbid shit. END_OF_DOCUMENT_TOKEN_TO_BE_REPLACED I guess Cannon was trying to make their version of a STAR WARS type fantasy sci-fi-deal. You can tell that when a character says “You got us here, you Thumerian wurbat, now get us home,” but it was already clear from the opening credits over a starfield and the STAR WARSy themes by Bill Conti. Then the credits explode into a shower of sparks. How could this not be exciting? END_OF_DOCUMENT_TOKEN_TO_BE_REPLACED

So it’s in the spirit of forgiveness and Christian redemption that I say I thought THE BOX was pretty good. His best, for what that’s worth. END_OF_DOCUMENT_TOKEN_TO_BE_REPLACED

Frank Langella (MASTERS OF THE UNIVERSE) plays Richard Nixon, who was apparently some sort of president. Michael Sheen (UNDERWORLD, UNDERWORLD EVOLUTION, UNDERWORLD: RISE OF THE LYCANS, THE QUEEN) plays David Frost, who I guess interviewed Nixon one time. This is the story of them negotiating and then filming an interview over a couple days and a couple other conversations they had in between and afterward and what not. Explosive! END_OF_DOCUMENT_TOKEN_TO_BE_REPLACED