So it’s in the spirit of forgiveness and Christian redemption that I say I thought THE BOX was pretty good. His best, for what that’s worth. 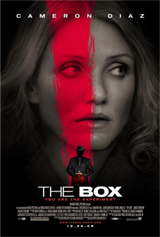 Based on a premise from a Richard ‘I Am Legend’ Matheson story (also made into a TWILIGHT ZONE episode in the ’80s) it’s a slow-boil ’70s-set thriller about what happens when a disfigured Frank Langella shows up at your house, gives you a box with a button on it and tells you you have 24 hours to decide whether or not to press the button, which will cause the death of a stranger but net you 1 million in clean, tax free cash. You know how it is. The family is literature professor Cameron Diaz, engineer James Marsden and their son.

They go through various stages of reacting – thinking it’s a prank, something connected to a sister’s wedding, taking apart the box to see how it works, running tests, investigating the man’s background. As the hours pass it becomes more and more clear that something weird is going on here. Situations change to make them need the money more. People around them do strange things, give them reason to be paranoid. Somebody gives them a photo of Langella before the scarring – he looks like the man in the moon. The NSA is spying, Marsden isn’t going to Mars, people’s noses keep bleeding, Diaz has a fucked up foot with missing toes that gives her sympathy for Langella. This is not your run of the mill box-that-kills-somebody-and-gives-you-a-million-dollars situation is what I’m telling you.

I like that the movie treats all this dead serious. No clowning around and laffs. It’s an ominous tone with an old school classical score. It sort of has that feeling I’ve talked about before, that confident air that it can lay everything out and you don’t know where the fuck it’s going but you trust that it does. The thing is, Kelly isn’t a master filmatist, he hasn’t earned that trust. In fact quite the opposite. So that created extra tension for me. The further it got the more it worried me, because I really was enjoying it but I could see the writing on the walls. It seemed likely that a story that by all means ought to be headed somewhere might really just end in scattershot pseudo-Lynchian weirdness. When it introduced the levitating rectangular water portals I figured it was doomed.

But you know what, it pretty much comes together. Not a great ending, but good enough to work. It pretty much explains what was going on. What was going on is preposterous, but so is a box that you push to kill somebody and get a million dollars, so it’s only fair. Nobody was misled that there was gonna be a perfectly reasonable explanation for all this, just one that makes sense in the world that has been presented to us.

Acting-wise Diaz is the weak link. Shouldn’t have made her do that accent. But she has some good moments. The highlight is definitely Langella. He has such a great voice, deep and elegant. He was a good hunky Dracula and at this age he’s a good Willy Wonka from Hell. He doesn’t even need that chunk digitally taken out of his face to be creepy. There are many good touches. Overall this seems like the work of a responsible adult who knows what he’s doing.

You see that Kelly? Was that so hard? You can do all your look-at-how-crazy-this is showoffy business, but if you just ground it a little it works better. Put it in a recognizable world, have a recognizable central plot there, a set of characters who have something they’re trying to do. Pretty simple.

This proves that with discipline Kelly can direct pretty well – he maintains tension at a slow pace, gets some good atmosphere, squeezes creepiness out of simple things like a man looking through a window or a kid smiling at you at a rehearsal dinner. Not bad. You don’t have to push a button that lets you make the movie you want but also causes emotional and artistic harm to everyone who watches it. Making movies doesn’t have to be a deal with the devil.

*Wait – hang your hat under your belt? That’s two different articles of clothing. what? I need to work on some of these metaphors.

Cameron Diaz Frank Langella James Marsden Richard Kelly Richard Matheson
This entry was posted on Wednesday, February 24th, 2010 at 2:05 pm and is filed under Reviews, Thriller. You can follow any responses to this entry through the RSS 2.0 feed. You can skip to the end and leave a response. Pinging is currently not allowed.