But I had reason to be suspicious of its reputation. Many of Harlin’s ‘90s movies, particularly his also-starring-Geena-Davis followup THE LONG KISS GOODNIGHT, deserve more credit than they got at the time. And there’s definitely precedent for mob mentality panning of movies that have been heavily covered as over budget, out of control productions. This had the additional gossip-bait of the star and director being married to each other, causing mean-spirited speculation that one was only hired because of the other one’s clout. (For example, an informative 1996 Independent article about what went wrong manages to refer to them as “Renny Harlin and his demanding wife.”) On top of all that, you know how it is with what I call the Old Timey Adventure genre. They almost always lose money, even when they’re great. That’s just how it is. END_OF_DOCUMENT_TOKEN_TO_BE_REPLACED 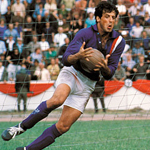 That one casual sporting exchange is historic because it starts up the conversation that leads to the deal: the best players from among the Allied prisoners will play an exhibition game against the German national team. For the Nazis it’s good propaganda at the end of a war that, let’s face it, did not improve their country’s image on the international stage. For the prisoners it’s an opportunity to plan an escape.
END_OF_DOCUMENT_TOKEN_TO_BE_REPLACED