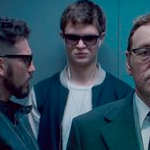 After they get away, when the gang meets up to split the money, they make Baby go buy the coffee. Here’s one thing they carefully edited out of the trailers: he’s a total dork. In the car, but also at home, or walking in public, he listens to his earbuds and sings along and does little dance moves and shit. The whole walk to and from the coffee shop he seems like he’s on the verge of busting into a full on SINGIN’ IN THE RAIN number. I wonder if they considered casting Moose from the STEP UP sequels in this. END_OF_DOCUMENT_TOKEN_TO_BE_REPLACED 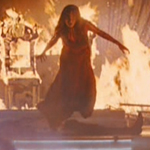 I was not familiar with the young actors playing the do-gooder couple of Sue and Tommy. Sue is Gabriella Wilde, a tall blond model who was in the Paul W.S. Anderson THREE MUSKETEERS, and Tommy is boyish Ansel Elgort, a rookie actor who has since been in the DIVERGENT series of trailers that seem to come out every few months, was the boy lead in THE FAULT IN OUR STARS and reportedly on the short list to play Young Han Solo in I HAVE A BAD FEELING ABOUT THIS: THE ADVENTURES OF ALL NEW HAN SOLO. Both actors won me over after initial skepticism. Meanie blood-dumper Chris Hargensen is played by Portia Doubleday, who I know from looking like Amanda Sieyfried on that tv show Mr. Robot. (She was also the surrogate date in HER, and her older sister Kaitlin plays Rhonda, the only major white character on Empire.) Chris’s bad boy boyfriend Billy Nolan (Travolta’s character) is Alex Russell, who I guess was in CHRONICLE and later Angelina Jolie’s UNBROKEN. END_OF_DOCUMENT_TOKEN_TO_BE_REPLACED