Yeah, CHRONICLE. I just shouldn’t watch these found footage movies, I guess. It doesn’t matter how good they are for their genre, I always think they pale in comparison to actual movies. But technically this isn’t a found footage movie, because they never claim that anybody found the footage, and they sometimes switch POVs from the one character’s camera to another character’s, or to security cameras. So it’s a footage movie.

I mean, at least it’s not another fuckin ghost movie. It’s closer to CLOVERFIELD, which is one I enjoyed well enough. It does use the computers to show you some things, it doesn’t follow the standard F.F. formula of long-slow-buildup-to-tape-ending-just-as-scary-shit-is-approaching-camera. It uses the gimmick to make a more naturalistic version of a familiar genre, in this case the super hero movie (specifically X-Men type super powers, not costumed vigilantism, thank Christ). If you saw UNBREAKABLE and were disappointed that it had good camerawork and that Bruce Willis starred instead of a whiny, pouty teenager, then you will like this movie better than I did. 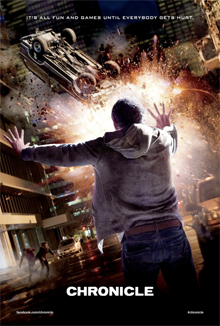 A kid named Dane DeHaan plays who cares what the character’s name is, who is no Bruce Willis. His defining characteristics are that he is real unhappy with everything in life and yet insists on recording it all with his expensive new suprisingly-large-considering-today’s-technology camera. He has a cousin (Alex Russell) who is not as much of a wet blanket and is loyal enough that he drags him along to a party, where he proceeds to just stand around and record everybody even though he’s repeatedly told it’s weird and is even almost beat up by a guy whose girlfriend he records dancing.

I wonder, are there fans of this format, and if so do they always delight in seeing a new excuse for why the characters are filming? Oooh, this one’s not a student documentary, it’s just a guy who likes to record everything! Innovative! If so the fans get what they want: scene after scene of the cameraman having to justify even having his camera turned on. That’s what THE GODFATHER was missing, in my opinion.

At the aforementioned party whatsisdick, his cousin and his cousin’s friend (Michael B. Jordan from RED TAILS) wander outside and climb into a pit that has a big glowing crystal thing in it. They soon discover that exposure to the crystal thing has given them brain magic, like Carrie White. But Carrie didn’t have any true friends to confide in, these guys have two bros each to share this with. They goof around and practice and evolve their skills from doing tricks with baseballs and Legos to lifting city buses and making themselves fly.

The best section is the goofing around. Kinda reminded me of that scene I loved in POLTERGEIST where the mom plays with the ghostly-chair-pushing in the kitchen. The cousin’s friend is funny and likable, so they deal with the unexplainable with humor and teenage fearlessness (as opposed to POLTERGEIST Mom’s laughing about it to hide her fear). It’s young dudes making each other laugh and trying to one-up each other with different super-power tricks. JACKASS meets X-MEN.

But of course, one of them GOES TOO FAR… MAD WITH POWER, and I won’t give away whether or not it’s the pouty, whiny guy that you’ve been wanting to punch in the face since the movie started. I also won’t give away whether they follow the cliche of killing the black guy first or the annoying mistake of killing the most likable guy first. (Okay, they do both, it’s the same guy. Spoiler.)

I’m surprised they didn’t do more with the female character. They just say she’s a “blogger,” which I can tell you is actually short for web logger. Anyway they introduce her and give her some scenes but as far as I could tell the only reason she’s in the movie at all is to explain why they change camera angles a couple times. Seems kinda wasteful. In CLOVERFIELD the cameraman was way more of a character and I don’t think you even saw him more than once or twice.

They do a couple new things with the format. The guy starts using his powers to make the camera float around, so that way they get some crane shots in instead of all shakycam. But hey, why not just do a regular movie, then? Same thing with the ending, they find a way for a character to leave the camera behind as sort of a fuck-you to the other guy’s habit of filming everything. Wait a minute, so you hated it too? The characters didn’t even want the movie to exist!

I’m not sure what the deal is with the boring title. I guess the idea is that it’s a chronicle of something that happened, because the video tape chronicles what happened. Other good titles would be RECORDING, TAPE or FILE, I guess.

It takes place in post-Apartheid Seattle, by which I mean it was filmed mostly in Cape Town South Africa (and some in Canada) substituting for Seattle. I only noticed one driving shot (no actors shown) that was definitely real Seattle. They did manage to put in CG versions of real Seattle buildings, and a billboard for the Seattle Xbox Live Sounders soccer team, but they didn’t bother to hide logos for South African banks. One hint that it wasn’t made by real Seattleites is the pouring down rain in the car crash scene. Yeah, it rains alot here but not that hard – somebody would comment on that.

I know none of that Seattle stuff really matters to the movie, but it makes me sad that now it’s not even just filming in Vancouver for Seattle, now it’s going all the way to Africa. South Africa. I’m not usually big on giving out tax breaks to corporations, but here’s a case where I wish they’d do it to get more filming here.

There are pluses: lots of FX that mostly look good for a lower budget movie. Short running time. And I give it credit for not using the following cliches that I’m sick of:

I know some of you guys loved this one. I’m not trying to shit all over it, I don’t think it’s worthless, but I guess I don’t understand the high praise. I guess it’s not too bad considering what it is. I’m just not into what it is.

another fucking found footage movie Dane DeHaan fake Seattle Michael B. Jordan
This entry was posted on Monday, June 18th, 2012 at 12:23 am and is filed under Comic strips/Super heroes, Reviews. You can follow any responses to this entry through the RSS 2.0 feed. You can skip to the end and leave a response. Pinging is currently not allowed.