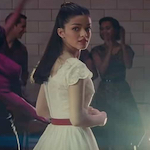 WEST SIDE STORY – it’s very clear when you see it – is a film by Steven Fucking Spielberg. That’s why I saw it. Usually when I write about a remake of a beloved classic I like to be somewhat knowledgeable about the source material, but this late in the game you’ve had plenty of time to read reviews from people who know the musical or the earlier Robert Wise movie forward and backward, can tell you all the things that Spielberg and screenwriter Tony Kushner (MUNICH, LINCOLN) added, cut, updated, etc., and the significance of those alterations. Or at least from someone who has seen the original. I have not. I would’ve, but Spielberg didn’t direct it.

I don’t really gravitate toward Broadway musical type stuff, but I do have a thing for great filmatism, so this thing knocked me out. As even I kind of knew, it’s the story of two gangs, the Jets (white guys) and the Sharks (proud Puerto Ricans) stubbornly fighting over territory in a dilapidated Manhattan slum that (this part is new, I believe) is on the verge of redevelopment. In the opening, Janusz Kaminski (COOL AS ICE)’s camera hovers over what remains of the neighborhood, climbs up the side of a structure under construction, past a billboard advertising the fancy apartment building and entertainment center it will become (featuring the sort of upper class white people who will inhabit it), then hangs out a while next to the wrecking ball waiting to get the process started. Meanwhile, the percussion section (David Newman [CRITTERS, ROVER DANGERFIELD, CONEHEADS, THE SPIRIT] arranging Leonard Bernstein’s music) playfully percolates like the build up to a heist sequence.