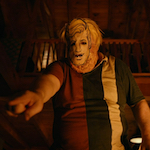 I do believe this is my first review where just telling you the movie exists is kind of a spoiler. But I had to have it spoiled to know to watch it myself, so now I’m passing that information on to you. This is a horror movie that was designed to be found on accident, originally promoted like this: “ADULT SWIM YULE LOG: Get in the holiday spirit with this cozy, crackling fire,” and airing at 11:30 pm after the season finale of Rick & Morty. Now it can be found on Home Box Office Maximum under “Adult Swim Yule Log – a.k.a. The Fireplace.”

It starts off as a normal Yule Log or fireplace video. Just footage of a fire with some Christmas music playing. But after a few minutes of that we start to hear something going on outside of the frame. The owner of the cabin containing the cozy, crackling fire is talking about getting the place cleaned We see her walk past the fireplace a few times. Then there’s a knock on the door, a woman (Tordy Clark, GLORIOUS) talking about her car breaking down, and introducing her son… a hulking, grunting Leatherface type (Brendan Patrick Connor, JOKER) wearing a plastic Halloween mask of a Ken-doll type character. He bursts in and attacks as his mom reminds him to “Say nice things to her, women like that.” It’s off camera, but we get the implication, and this is a really fucked up thing to have on as holiday background ambience.

Since this is a feature length film that follows from the question “What if a Yule Log turned into a horror movie?,” it begins in a continuous-take found footage format. The mother and son clean up their mess just in time to hear the people who are renting the cabin return, and they hide. Alex (Justin Miles, THE CRAZIES) comes in and adjusts the camera to show more of the cabin – furniture, homey decorations, bearskin rug – and as he and his girlfriend Zoe (Andrea Laing, “911 Operator #2,” RICHARD JEWELL) talk, we pick up that he makes Yule Log videos (including a pornographic one?) as a side hustle. But he’s kind of using that as a ruse – in this case he’s sneakily recording his attempt to propose to Zoe. 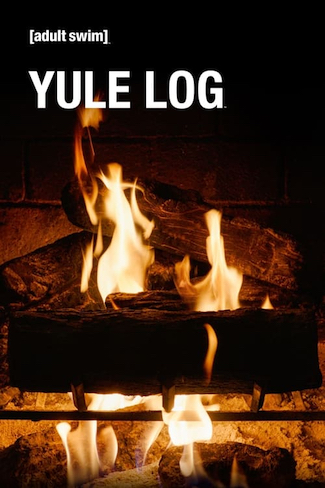 It’s very cleverly designed to get alot of mileage out of this one camera angle. I love the gimmick that the autofocus occasionally blurs them out and focuses on a champagne bucket in the foreground, because it reflects the masked maniac peering in at them from a door. Also I like how the shot frames half of the front door to the left of the fireplace, so that we can get a partial view when Zoe’s awkward non-answer to the marriage proposal is interrupted by a sheriff (Mark Costello, HOT DOG… THE MOVIE) and his deputy (Jonathon Pawlowski, Lovecraft Country) showing up to ask if they’ve noticed anything unusual.

The conversation with the sheriff is full of humorous discomfort as they politely answer nosy questions about their lives and the fireplace video biz and learn that they should not have cut firewood from the tree out front because it was “a hanging tree for slaves,” plus the Native Americans that lived on this land originally said it was a demon tree or some such. At first I wasn’t sure if the Sheriff was saying the tree was sacred, or historical, but it turns out he’s saying it’s cursed. He seems exasperated by the silly tourists not getting this. They apologize and explain that they didn’t know and say “Oh” when the sheriff extinguishes the fire without asking. And before leaving he casually says, “Well, if I recorded that log I would definitely erase it,” and they nod like it makes sense.

Soon the cast of characters balloons due to a BARBARIAN-type scenario where the cabin somehow got double-booked. So this group of stoner podcasters push their way in and explain that they timed their edibles to kick in just as they arrived. Maybe there’s a little bit of mother! in there too, the way poor Zoe gets bowled over by all these uninvited guests (who Alex is much more open to – yes, we’ll take your edibles; yes, we’ll get in the hot tub with you; here, let me tell you Zoe’s deepest personal secrets, just promise not to say anything).

It’s a good tone because these characters and the things they say are often funny, but the performances are natural enough that I’m still taking the horror seriously. That’s difficult to pull off, especially in long takes from one camera angle. But as one might expect in an Adult Swim production, there’s plenty more absurdity and some weird tonal shifts waiting in the wings. And though it’s impressive how much of the story they can create just with people in front of a fireplace, it’s also kind of a thrill when it breaks the shackles of the format by (YULE LOG SPOILER) zooming into the fireplace and taking on the perspective of a cursed, burning log as it takes flight around the cabin and attacks people.

After that it’s shot like a “real movie,” and I love the touch that they still mostly stay in the living room but we’re free to see them from different angles, including one where the fireplace is still visible in the viewfinder of the camera. The flying killer log obviously pushes us definitively into comedy territory, but with a so-deadpan-I-kind-of-take-it-seriously quality like the killer tire in RUBBER or the killer elevator in THE LIFT and DOWN. I also love it because it almost feels like the movie you would get if you treated “Yule Log” as an intellectual property being adapted into movie form. Like how they made a movie out of OUIJA. YULE LOG: THE MOVIE would have to be about a cursed log, right? And it would start as a fireplace video before expanding its canvas.

Where THE FIREPLACE gets either stickier or even better – and I’m not totally sure which side I land on there – is a piling on of concepts reminiscent of CABIN IN THE WOODS at times, but maybe even the non-jokey premise-on-top-of-premise horror like MY SOUL TO TAKE, TOOLBOX MURDERS or THE EMPTY MAN. The cabin is said to be located in a “hillbilly Bermuda triangle,” which explains why these people can be attacked by a masked maniac and a haunted log at the same time and the two events are unrelated, even at odds with each other. And that’s only the beginning! If you’re able to still take it seriously as horror, that probly goes out the window when the UFO shows up. But I think it’s probly worth it for the transition from laughable silly alien costume to impressive gore, as well as the line, “Oh my god, that’s a silver alien. They’re the worst ones.” Oh, and also the way the mother is able to sound racist saying “You don’t belong here!” to an alien.

And there’s still more. There’s a whole David Lynch inspired element where an off brand Colonel Sanders beckons people into the fireplace for uncomfortable chit chat. Hard to explain. 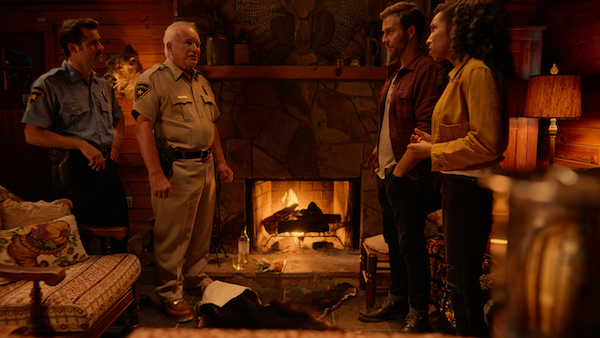 Believe it or not there are also some lofty ideas at play here. The curse of the log comes from a history of atrocities, which are contrasted against things like Zoe’s environmentalism and Alex’s performative allyship. We see some of the inhabitants of the cabin in different time periods, and the little man in the fireplace brings up the theme of people being progressive for their time but monsters by future standards. I don’t think it entirely works, but I admire the ambition of counter-intuitively combining heavy ideas with absolute silliness. I think there’s something to this approach of combining things that logically don’t belong side by side to get more of a charge out of them than if done in the obvious tasteful way. But I’m sure some will feel quite the opposite.

It’s as much of a highwire act technically as it is tonally. There are these occasional wipes across the screen that show the same angle of the same cabin but in different time periods – a slave owner who thinks he’s nice, a 1950s household shot in black and white, etc. My first thought was “Oh, there’s where they can hide some cuts” and my second was “Wait – how did they line it up to match so exactly?”

Even if you removed all the historical racism stuff, and that it’s presented alongside a goofy alien and what not, we’ve still got loads of queasiness from this “Pleatherface” character attempting to force himself on women, and his mother treating it as her boy out there trying to find Mrs. Right. But I think this is genuinely Tobe-Hooperesque – funny at times (like when he holds an ax in the air but only to snap the handle in half to show off his strength) but not at the expense of being scary and gross. I was genuinely repulsed by the scene where the mother straddles Alex and forces him to eat Pimento cheese spread, but also there’s some straight up hilarious dialogue in there as he offers to help her son use dating apps and tries to convince her he could have a future if he went to a trade school. “There’s a shortage in the trades. Lack of tradesmen.” It’s a very familiar type of full-of-shit that we see all the time from people not being terrorized.

What if THE FIREPLACE somehow became a phenomenon, and there was a trend of hidden track horror movies? They start being released as yoga DVDs, unboxing videos, cooking tutorials, C-SPAN broadcasts, Hallmark Christmas movies, MINIONS sequels, you name it. Scaredy pantses wouldn’t be safe anywhere. That would be mean.

The horror movie released as a Yule Log video is a brilliant concept, but I think this is an interesting horror movie anyway. It’s cleverly designed and staged, its grounded performances keep it from turning into a spoof, it extends the look of Yule Log videos into feature length horror, it’s very playful and takes you on an exciting ride, whether or not it gets too bumpy at times. For me it’s not in the top actual horror movies of 2022, but it’s definitely more evidence that this is a landmark year for the genre. Yet another interesting one added to the list, and literally none of us saw it coming.

I have one minor complaint: this is really not Christmas horror, and I think it ought to be. I guess in the name of realism he’s taping his fireplace in advance of the holiday season. But obviously if Adult Swim is gonna play it as a Yule Log every year it should have more seasonal theming than a few minutes of Christmas music at the beginning. And that could help it become a perennial classic. Oh well.

THE FIREPLACE is written and directed by Casper Kelly, best known for the Adult Swim video Too Many Cooks (first released as a 4 am infomercial before most of us saw it on Youtube). He also made the Cheddar Goblin sequence for MANDY. So that’s a guy who comes up with cool, weird stuff to do. The world needs more people who come up with cool, weird stuff to do. Thank you for your contributions so far, Casper Kelly.

Adult Swim Andrea Laing Casper Kelly Christmas found footage Jonathon Pawlowski Justin Miles long takes Mark Costello Tordy Clark
This entry was posted on Monday, December 19th, 2022 at 7:20 am and is filed under Reviews, Comedy/Laffs, Horror. You can follow any responses to this entry through the RSS 2.0 feed. You can skip to the end and leave a response. Pinging is currently not allowed.

9 Responses to “Adult Swim Yule Log a.k.a. The Fireplace”