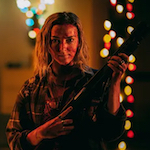 CHRISTMAS BLOODY CHRISTMAS is the new one from writer/director Joe Begos. I previously reviewed his first two features, ALMOST HUMAN (2013) and THE MIND’S EYE (2015), but I’ve been sleeping on his 2019 double whammy of BLISS and VFW. Nevertheless I had to see his new one as soon as it hit Shudder because it’s Christmas horror. There’s a timeliness factor.

It’s a low budget movie but seems huge and lush compared to those other two I mentioned. It continues in the same tradition of filtering a specific ‘80s horror aesthetic through Begos’ brain, now with more dialogue and humor. But I wouldn’t call it a comedy. After the comical advertisements that open the movie and introduce the absurd horror premise, there aren’t really jokes. The laughs come from the characters themselves being funny. Otherwise it comes across as very serious – an odd choice that I like. 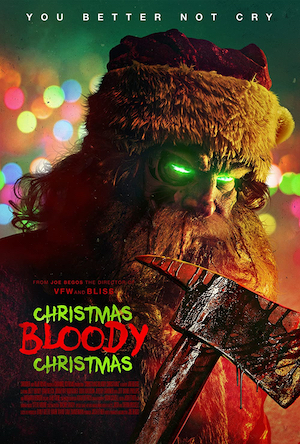 The premise: some fuckin company decided to re-dress and reprogram military robots as animatronic Santa Clauses and sell them. We don’t meet the people responsible, we just learn this from some advertisements and news reports. Some of them have gone haywire, so they’ve been recalled, but there’s still one in a toy store in this small town, and on Christmas Eve it decides to start walking around killing people. That’s the explanation for the horrors in store. You just have to accept that and move on.

It’s weird to say this, but the biggest and best part of the movie has nothing to do with the killer robot Santa – it’s the part where it’s basically a dirtbag version of a Richard Linklater movie. It’s the BEFORE trilogy except with two foul-mouthed record store employees getting progressively drunker and hornier while flipping each other shit and debating Christmas songs, metal albums and horror sequels. Instead of beautiful European locales it’s a few locations on a little strip (record store, toy store, bar, house), with a garishly tinted look from all the Christmas lights piercing through the snowy night sky and 16mm grain. (And I was surprised to read that this was filmed in California, so I guess the snow must all be fake? It looks great.)

I’m sure these characters will rub some people the wrong way with their Rob Zombie-esque level of cursing and show-offy blunt talk about dicks and pussies and etc., and possibly offend a few with what I believe are some of Begos’ own against-the-grain pop culture opinions. But I found the performances of the two actors charming and the chemistry and flirtation honestly kinda hot, plus I just respect the audacity of a horror movie where the two leads are engaged in conversation having no idea about a robot Santa Claus murdering their friends, and where I’m somehow not wishing for it to spend more time spent on the latter. You don’t see that every day. Or every holiday season, unless this becomes a perennial favorite for you and your family or church group.

The lead is Tori (Riley Dandy, THE CITY OF GOLD), owner of a very cool record and video store (I didn’t catch the name), which is meticulously graffitied, lit with blacklight, has NEW YORK NINJA on display and is very busy on Christmas Eve. Tori closes up and plans to try to get laid by a Tinder date until her longtime employee Robbie (Sam Delich, SPIDERHEAD) convinces her to go get drunk with him instead. They stop to visit their friends Jay (Jonah Ray, VICTOR CROWLEY) and Lahna (Dora Madison, a Begos regular who was also in the actual Linklater movie EVERYBODY WANTS SOME!!), who make a big deal about planning to have sex in the closed toy store that night. Aggressively sex positive, I guess. They will set off the Santa robot similar to those people resurrecting Jason by going at it in JASON X.

Tori and Robbie leave them to their debauchery and go to a little bar where they know the bartender (Josh Ethier, who’s in all of Begos’ movies, and also edited them, plus LEATHERFACE, THE STANDOFF AT SPARROW CREEK, and ORPHAN: FIRST KILL). I think it’s supposed to be kind of an anti-Christmas-cheer thing that they just want to get drunk, but pretty much my favorite tradition (and thing I’ve missed most during the Covid era) is going to a certain bar with friends on Christmas Eve. Drunken revelry is certainly a form of merrymaking, and one of the traditions that caused Puritans to ban Christmas celebrations from 1647-1660. Let me tell you, the bar we go to is never empty on Christmas Eve, it’s hard to get a big enough table. But there’s an appeal to this quiet solitude here too. I dig it.

One other customer shows up and extends last call – the sheriff, played by Rob Zombie regular Jeff Daniel Phillips, who I’m suddenly paying more attention to since he was so funny as Herman in THE MUNSTERS. Here he’s a more serious character, though – the sleazy asshole cop who won’t believe them later. 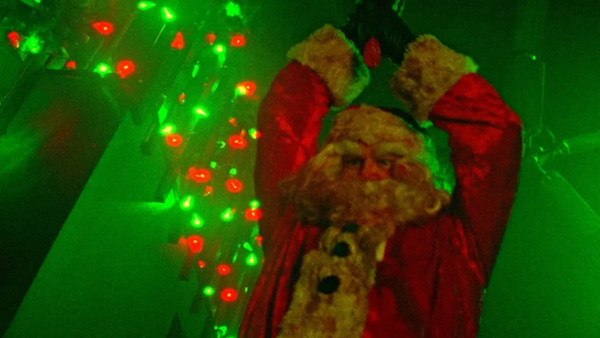 The Santa seems to want to punish people, and enjoys doing it with an ax, so there’s a SILENT NIGHT, DEADLY NIGHT meets THE TERMINATOR feel to it, and sure enough I read that the idea evolved from Begos’ rejected pitch for a SILENT NIGHT, DEADLY NIGHT sequel or reboot or whatever. No matter, but that would’ve been funny for this to be an official chapter of that series.

There’s some pretty brutal gore, with Begos himself getting one of the better deaths in a cameo. I guess they used real animatronics for some of the Santa stuff? I didn’t notice that. But I like when he gets battle damaged and starts to have glowing eyes. And shoot lasers. I think some of the robot sequences move a little slow, but they always look cool, at least.

Dandy is really what makes the movie work, and I wondered if I’d seen her in anything – yes, she was in this year’s badass Elsa Pataky action vehicle INTERCEPTOR. I don’t remember her character. But it was funny to look her up and realize that in addition to getting drunk off her ass and completely covered in the blood of the guy who just went down on her in a Christmas horror movie, she also had a supporting role in a Netflix Christmas romcom this year called A HOLLYWOOD CHRISTMAS. And one last year called A CALIFORNIA CHRISTMAS: CITY LIGHTS. And she was the lead in a 2019 one called A KISS ON CANDY CANE LANE and a non-Christmas one called THAT’S AMOR. Good for her, being willing to get down in the muck.

It’s pretty weird to make a movie about this silly topic and then give it a tone that’s more harsh and grim than fun at the end. But I’m not against it. And you know what, I really hope it gets a sequel, and I hope it’s in the spirit of Tori’s professed favorites PET SEMETARY TWO, FREDDY’S DEAD: THE FINAL NIGHTMARE, HELLRAISER III: HELL ON EARTH, and BOOK OF SHADOWS: BLAIR WITCH 2. Except I guess if it was like any of those she wouldn’t be returning. A conundrum. Okay, maybe make it more like SILENT NIGHT DEADLY NIGHT 2, with a bunch of archival footage flashbacks? I don’t know. Surprise me, Robot Santa. 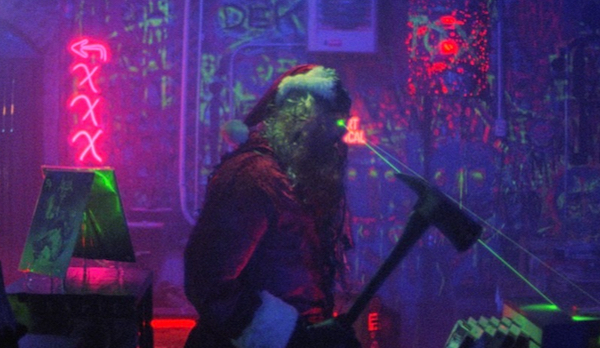 Christmas Christmas horror Dora Madison Jeff Daniel Phillips Joe Begos Jonah Ray Josh Ethier killer Santa Riley Dandy robot Sam Delich
This entry was posted on Tuesday, December 20th, 2022 at 7:10 am and is filed under Reviews, Horror. You can follow any responses to this entry through the RSS 2.0 feed. You can skip to the end and leave a response. Pinging is currently not allowed.