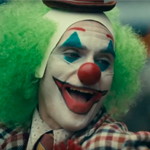 Let’s take a moment to consider that when BATMAN & ROBIN came out there is no way in hell any of us could’ve guessed that in 22 years one of our generation’s most respected actors would star in a super-fucked-up hard-R ‘70s period piece Scorsese knockoff character study vaguely based on (and officially branded as) an iconic Batman villain. Much less that it would be controversial only for reasons other than “it’s too scary for kids.” It’s a crazy world we’re living in. Almost like… the Joker. Oh my god.

Joaquin Phoenix (Joel Schumacher’s 8MM) plays Arthur Fleck, a weird socially inept guy who takes care of his sick mother (Frances Conroy, CATWOMAN) in his shitty New Y— I mean Gotham City apartment and works as a clown for a small agency that rents them out to hospitals and businesses and stuff. And he’s been trying to write some jokes to try his hand at standup comedy. But he gets in trouble at work for things that aren’t his fault, he loses his social worker because of budget cuts, a black lady is mean to him on the bus, etc. One night when some drunk Wall Street assholes pick on him on the subway he Bernard Goetzes them, flees the scene, and is dubbed by the media and police a clown vigilante attacking the rich. He alternates between trying not to get caught and being empowered by what he did. 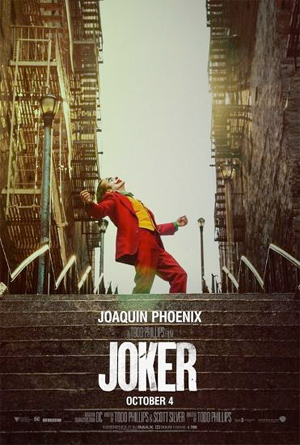 The screenplay by Phillips & Scott Silver (8 MILE, THE FIGHTER) takes maybe six things from DC Comics, with two of them being “the Joker” and “Gotham City.” Another is Batman’s old man Thomas Wayne (Brett Cullen, GHOST RIDER), who has not yet been murdered and is a rich asshole who’s running for Mayor. Arthur’s mom used to work for him and is always writing him letters, believing he’ll help her with her financial problems. Since the movie is kind of SUPER-8-for-Scorsese-instead-of-Spielberg it makes you wonder if the famous death of Batman’s parents will become a political assassination in homage to TAXI DRIVER. That would be a different take.

The other obvious comparison is KING OF COMEDY, with Arthur causing Rupert Pupkin-like discomfort through delusional belief in his talent as a comedian and being fixated on talk show host Murray Franklin (Robert De Niro, Joel Schumacher’s FLAWLESS). It’s much less funny than Scorsese’s movie, but it does have some dark humor in it. For me the biggest laugh was when he exits a dramatic scene walking face first into a glass door. I love the irony that he fails with all his comedy and then does a great physical gag completely by accident when he’s not trying to be funny.

For some guy near the back of the theater the biggest laugh was a not-exactly-joke at the expense of a little person (Leigh Gill, THE SCORPION KING 4: QUEST FOR POWER) trying to flee the scene of a gruesome murder. I didn’t find it funny but that guy straight up guffawing was very in line with an evil Joker sense of humor and made the scene even more upsetting.

I think the idea that works best is Arthur’s neurological disorder that makes him sometimes laugh for no reason. It allows for Phoenix to do a great Joker laugh for the unorthodox purpose of causing social discomfort instead of punctuating evil speeches. Sometimes the situations it causes are funny, but you feel bad for laughing. Sometimes they’re just sad.

Zazie Beetz and Brian Tyree Henry, two actors I love from Atlanta, make appearances. Henry does his thing in one scene but Beetz has an important role as a neighbor who Arthur becomes fixated on, and the way that whole relationship goes down is interesting. It’s definitely noticeable that pretty much every character that upsets Arthur besides the one he kills is black, but I’m unsure whether this is an unconscious bias coming out in a depiction of urban stress, or an intentional point about Arthur having racial resentment. Could go either way.

I kind of liked JOKER. I found it involving, Phoenix is obviously very good, it looks beautiful, there are those bits of dark comedy, there are some turns I didn’t see coming, some genuinely scary parts, and it’s a creepy slow burn to a couple really effective explosions of seriously fucked up violence. It’s about as well-executed a version as you could hope for of what in my opinion seems like the half-thought-out premise somebody brags that they pitched to a studio but the fucking cowards wouldn’t go for it. Something Max Landis would come up with. What if it’s The Joker, in Gotham City, only it’s real dark and grounded, ‘cause you learn about his problems, and he doesn’t do fun Joker stuff, or obviously fight Batman or anything. ‘Cause if you think about it if the Joker was real he wouldn’t fall into a vat of acid and have giant jack in the boxes and fight a guy dressed as a bat in a stylized gothic metropolis. He’d be more like Mark David Chapman. So that’s what you have to watch. Sorry losers. Fuck you.

That they were able to make such a watchable movie out of an idea I find so fucking stupid is actually very impressive to me.

Maybe it would bother me less if they hadn’t done such a good job of getting our attention, making people treat it as a big important movie. As a small little experiment, a strange pop culture mashup, obviously it’s different from what other people are doing, and that’s good. But when I hear somebody imply that this is somehow a better or deeper way to do comic book movies because it takes the fun parts out and does an imitation of a type of dark character study that was new 40 years ago… I’m just not sold on that at all. There are better fucked up psychological portraits than JOKER, but there aren’t better Dolph-Lundgren-on-a-sea-horse movies than AQUAMAN. So if I had to choose, I’m goin with the sea horse.

I’m glad we get both. But don’t give me some horse shit line about he wanted to make a character study but the only way to get that greenlit in this day and age is to say it’s a reimagining of Batman or Mork & Mindy or some shit. I mean, Joaquin already made YOU WERE NEVER REALLY HERE. That was way more challenging and he didn’t have to rename his character Beetle Bailey or anything.

I’m also skeptical of all these takes about this being a timely movie (or too timely… “this is not the time for a movie about this”), as if it’s a recent development that sick people feel/are mistreated and have a hard time and become suicidal or psychotic or stalk people. I’m not sure how this addresses those problems in a more advanced way than Scorsese did with Travis Bickle when Phillips was six years old. I think the attitude of the movie is actually pretty dated, this idea that it’s subversive and rebellious to recast heroes as villains. I get that this is telling the story from a different perspective, but making Thomas Wayne an asshole and Alfred (Douglas Hodge, THE DESCENT: PART 2) kind of a douche and the murder of the Waynes part of a backlash against the 1% isn’t… like… a cool idea. It’s just a very mild form of taking a shit on stage.

(Fucking with the audience by SPOILER making us believe for a couple minutes that they made Joker be Batman’s brother is a better one. I heard a guy sigh and I thought “I agree.” But when you find out what’s really going on it’s more interesting.)

(Or not! Cullen told The Hollywood Reporter, “The backstory was that Arthur’s mother had worked for Thomas in his home, and she was a beautiful woman who Thomas was attracted to and it led to a physical relationship. Later in life, she’s in and out of mental institutions. And in my mind, Thomas Wayne put her there.” Boooooooooo.)

This is probly some nerd shit, but I just want to say that I hope next time somebody plays the Joker they forget about Heath Ledger’s version. Yeah, he was great – now can we get back to what the character used to be? There’s no reason he has to have greasy, scraggly hair and messy makeup and not have white skin and green hair. This seems less like an interpretation of the nearly 70 year old comic book character than of specifically the Ledger version. The only thing I can think of that arguably comes from a traditional Joker is how skinny he is, but that seems to be mainly for MACHINIST style shirtless grossout purposes.

Is it weird that there’s not even any references to playing cards? Where does he get “Joker” from? ‘Cause he tells jokes?

If you’re not sure this is your type of movie, it probly isn’t. But if you’re down to clown and stoked to get joked and don’t necessarily care whether or not someone has danced with the devil in the pale moonlight – sure, give it a shot.

I guess in the end Arthur Fleck is kind of like GG Allin. Both planned to kill themselves on stage, but fate took them in other directions. GG just o.d.’d and Arthur became The Joker. Or at least he put on makeup and stood on a car and people acted like he was cool. I can’t say I’m disappointed that this is (supposedly) a standalone. I think this is enough. Unless you put Aquaman in the next one.

p.s. According to IMDb JOKER is an alternate title for WILD CARD, Jason Statham’s remake of the Burt Reynolds movie HEAT. I just thought you should know.

Brett Cullen Brian Tyree Henry DC Comics Frances Conroy Joaquin Phoenix Robert De Niro Scott Silver Todd Phillips Zazie Beetz
This entry was posted on Tuesday, October 8th, 2019 at 9:15 am and is filed under Comic strips/Super heroes, Drama, Reviews. You can follow any responses to this entry through the RSS 2.0 feed. You can skip to the end and leave a response. Pinging is currently not allowed.