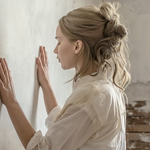 Jennifer Lawrence (AMERICAN HUSTLE) is the nameless female lead (credited as “mother”), married to an older man (Javier Bardem, PERDITA DURANGO, credited as “Him”) who’s a famous poet suffering from writer’s block while she looks after him and painstakingly rebuilds his house after it was destroyed in a fire. When some random doctor dude (Ed Harris, knightriders!) shows up at their door, the husband invites him to stay without taking her feelings into account, and this is the breeze that will become a tornado of escalation intrusions, insecurities and violations. By the end she’ll be (spoiler!) caught in the middle of huge riots and uprisings even though she will never leave the house.

The camera stays close to Lawrence, often in her face, keeping us attuned to her sad, awkward compliance. We can see that her “I’m happy to have guests” front is unconvincing, and that nobody much notices or cares. We wince with her at every pinprick, like each time the doctor’s wife (Michelle Pfeiffer, wolf!), who moves in the next day, singles out the husband to thank for his hospitality, completely (perhaps intentionally) ignoring the wife’s larger contribution. We feel bad not just for “mother,” but for Lawrence, the actress and take-no-shit personality, for having so much of her role just be walking around the house, upset, crying things like “No! You can’t do this!” 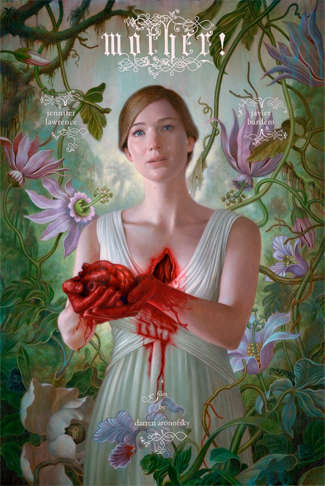 Aranofsky has distilled a maddening stress dream into cinematic form, a life constantly trying to continue but inevitably spiraling out of control instead. She just wants the simple satisfaction of spreading some putty on the walls, but she can’t get going for one god damn minute without this awful lady coming in, giving her drinks, wanting a tour, pushing her buttons about her marriage, her age, her lack of kids, whether and when and how she should have them, what her husband might secretly think about it, about her. This woman is a master of the innocent-acting takedown, the total emotional dissection of a person disguised as friendly small talk.

Small annoyances – unexpected impositions, guests leaving messes, snooping around rooms they were specifically asked to stay out of – snowball into nightmare situations. One moment there’s an unexpected knock on the door, next thing you know she’s asked to give a speech to the grieving family of a guy she didn’t know, and ridiculed for not knowing what to say, even for what she was wearing when they showed up and pushed her out of the way and took over her house. And that’s before people start breaking shit and hooking up in her bedroom and painting the house without her permission!

It’s a two-hour movie that I think might’ve been improved by a little tightening. There’s a whole lot of shit that happens over and over and over and over again. But admittedly the repetition is part of what makes it so effectively maddening. She doesn’t get assaulted or tortured or anything but you’re thinking please, for God’s sake, can this poor lady catch a fucking break at some point?

We know from his enjoyably off-kilter Old Testament epic noah! that Aranofsky is a very religious person, or at least very interested in religion, and crediting Bardem as “Him” obviously implies that he represents God. Both Aranofsky and Lawrence have described the movie as an allegory, with Lawrence representing Mother Earth, Bardem representing God, Harris and Pfeiffer as Adam and Eve, their sons as Cain and Abel. Not sure who represents the rock monster angels of the Bible.

Fair enough, but in any piece of art about an artist I always assume it’s at least partly autobiographical. And since Aranofsky had a pretty public split from his wife (I remember because it’s why he decided to leave THE WOLVERINE) I couldn’t help but read this as an apology to her – a depiction of how bad the relationship must have been for her. We see how she subjugates her life to his alleged artistic genius, how she works and he fucks around and hasn’t written a god damn word in forever but still gets all the say and all the credit and worship. He disrespects her and inconveniences her and ignores her needs and desires and still plays the nice reasonable wise man and gets away with it. He acts humble while completely addicted to their stroking of his ego. Talking to fans becomes signing books becomes moving into the house and becoming a literal religion. Her home, her life, her baby become fodder for them, to invade and take and do what they want with, against her wishes, as always.

In that reading, though, isn’t the movie another well-meaning violation of his ex’s privacy? For all its sympathy doesn’t this metaphor reduce her in a way, portraying her as a muse and caretaker more than an artist in her own right? She’s a talented actress – in some circles isn’t she a more exalted genius than he is?

The religious reading is provocative too because obviously Mother Earth is not a Biblical character, yet the story is from her perspective, and she’s the audience’s point of sympathy. That’s in keeping with NOAH’s inclusion of environmentalism as part of religion. But isn’t it weird that this God is kind of an asshole, or at least full of himself? And passive aggressive to Mother Earth about her ability to bear children? A little rapey, too. Aranofsky presents God as real but overrated.

Very late in the movie I was thinking about how different the tone is from the (very good) trailer, partly because that was built around a screeching violin that is not in the movie. Only then did it occur to me wait a minute, is there any score in this movie? I couldn’t remember hearing any. It turns out that the great Johann Johannsson (sicario!) recorded nearly 90 minutes of score, even moved to New York and worked closely with Aranofsky, providing music to play on set and composing in the next room while Aranofsky edited. But after screening the rough cut he and Aranofsky agreed to ditch all that shit and try “another score which was more sound-design, based on processing live acoustic instruments and kind of incorporating that into the soundscape of the house.”

As Johannsson told Vanity Fair, “You start with a slab of granite or marble, and you carve things out. And in this case, we carved out all the granite, all the marble. And none of it was left.” Sounds used apparently include Johannsson and Ryuichi Sakamoto hitting a pane of glass with mallets and Colin Stetson clicking the keys on his saxophone. So it’s not so much music as the creepy sounds that the house makes. Before reading about this I asked a friend “That didn’t have any music in it, did it?” and he hadn’t noticed at all. I think that’s a sign of how well it works.

Come to think of it, the typographic gimmickry of the title exactly describes the filmatistic style of the movie. It’s in all lower-case, yet has an exclamation point. It really does!

I wouldn’t say I quite love this movie, but I came out liking it, and it elevates in my mind as I write about it. For sure its harsh rejection by society (it achieved the rare ‘F’ grade from CinemaScore, film festival booing incidents and some pretty sneering reviews) is predictably unwarranted. When a movie has unusual content and is undeniable on a technical level, can’t you just respectfully say it’s not your thing? Besides, when you put down one mother, you’re putting down mothers all over the world.

As you can tell, the story is very interpretive, so it partly depends on what we’re willing to bring to it, but just on a movie-watching level it’s an effectively intense experience. It puts you through the wringer and you’re exhausted at the end. In a good way.

I like directors like Aranofsky, who you know even if you don’t like one of their movies, at least it’s gonna be interesting. With mother! I think I got a little of both.

??? Darren Aranofsky Domhnall Gleeson Ed Harris Javier Bardem Jennifer Lawrence Johann Johannsson Kristen Wiig Michelle Pfeiffer
This entry was posted on Monday, October 23rd, 2017 at 11:15 am and is filed under Horror, Reviews. You can follow any responses to this entry through the RSS 2.0 feed. You can skip to the end and leave a response. Pinging is currently not allowed.