There’s Someone Inside Your House 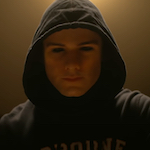 THERE’S SOMEONE INSIDE YOUR HOUSE (2021) is a horror movie that played Fantastic Fest this year and then came to Netflix. It’s a solid teen whodunit slasher very much in the post-SCREAM vein, but with some 2021 themes and concerns. I like that because it shows that this is a worthwhile format even when it’s not a remake, a sequel or a retro-styled throwback.

The title doesn’t describe the premise (unless in some poetic way that I’m not picking up on), but it does apply to a few of the suspense sequences, including the first one. It’s a SCREAM-like cold open but with a macho football player named Jackson (Markian Tarasiuk, CHRISTMAS JARS), talking to his friend on the phone and noticing odd things that make him think someone else is in the house. At first it’s things subtle enough to dismiss (what is this doing on the table?), but they escalate until he finds a trail of photos of himself punching someone bloody in a possibly homophobic bullying incident. Then he comes face to face with his killer – who is wearing a mask of his face. Yes, the killer wears 3D-printed masks of his victims, a technology invented by Darkman, but given new meaning here as the killer seems to want people to face their ugly selves. A very cool masked slasher gimmick because it has meaning, hasn’t really been done before, and looks creepy as fuck. Wouldn’t that freak you out even more than seeing Ghostface? As soon as you see it you know that you are the target and that some serious prep time has already gone into it.

There’s a wry bit of satire in that Jackson’s dying words – “This isn’t who I am, this isn’t me” – echo cliches we know from the hollow apologies of publicly exposed bigots. So at first there seems to be that sort of SAW thing where the killer is trying to make a judgmental point about his victims and you wonder if you’re supposed to sort of agree with him. The second victim is another asshole – student council president Katie (Sarah Dugdale, IN THE SHADOW OF THE MOON), who loves platitudes about tolerance but secretly does a white supremacist podcast. You wonder, should this be called CANCEL KILLTURE? And is this gonna turn into an “anti-fascism seems real nice at first but it can go too far” moral?

But we quickly learn that the killer’s kink is more broad than calling out prejudice – he just likes to reveal people’s dirty secrets. One character, Zach (Dale Whibley, Degrassi: The Next Generation) even throws a huge “Secret Party” where the theme is everyone confessing things to each other, trying to get ahead of the killer (possible homage to CHERRY FALLS having a huge orgy to thwart a killer targeting virgins). Zach is a rich kid who people are suspicious of because his dad (William MacDonald, PURE LUCK, HOLLOW MAN II), who he hates, notoriously buys out everyone’s farms and is ruining the town. Zach reveals that his dad’s secret is a huge collection of Nazi memorabilia and that his own secret is that he converted most of it to bongs. (I was not comfortable with how comfortable the kids were smoking from Nazi shit.) 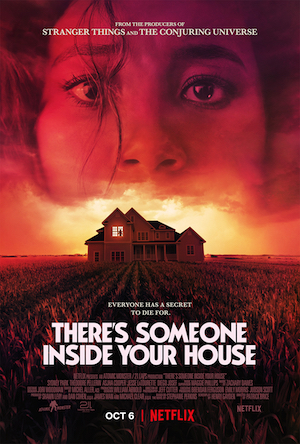 In a change from those late ‘90s, early 2000s horror movies of the Dimension Films era, Zach is I believe the only straight white person in our central group of friends. The lead is Makani (Sydney Park, WISH UPON), who when she moved here was welcomed to their cafeteria table while other kids were calling her “Moana.” (Zach says that’s not even an insult because it’s a good movie). Alex (Asjha Cooper, EVERYBODY WANTS SOME!!) is Makani’s most militant friend, Rodrigo (Diego Josef, MESSAGE FROM THE KING) is shy and addicted to painkillers (a shitty secret to get murdered for), Darby (Jesse LaTourette, BOY ERASED) is either non-binary or trans and fortunately we don’t have to see any cruel bullying, but rather the great shame of being publicly name-dropped by someone seeking praise for tolerating Darby. Caleb (Burkely Duffield, PATHFINDER, WARCRAFT) is gay, which doesn’t stop him from playing on the football team, but he’s the guy who got beat up by Jackson, so people suspect he’s the killer and he takes refuge at the table too.

Like many of the modern slasher movies that work, this depends on a strong central performance and character. Makani fears not only the murders, but the potential revealing of her own dark secret. She harbors tremendous guilt for an incident that got her arrested and caused her to move here and live with her grandma (BJ Harrison, RISE OF THE PLANET OF THE APES). She thinks if her friends found out her real last name and Googled her they wouldn’t like her anymore. So despite my joke earlier about being cancelled, this is very much a movie about forgiveness, redemption and looking at people as more than their past mistakes. A similar theme is explored much more profoundly in another recent Netflix horror release, Mike Flanagan’s 7-episode limited series Midnight Mass. Watching that, if you haven’t, is definitely a higher priority than this. But most things aren’t gonna be as good as that, so I won’t hold it against them.

SPOILER IN THIS PARAGRAPH: There’s a very sweet moment after the killer has indeed broadcast Makani’s secret to everyone via mass-text-message (which sure seems to be a thing in horror movies these days). Worried of what her friends think of her now that they’ve read it, she learns that Darby actually stopped reading to instead hear it directly from Makani. As her friend, Darby wants to hear the full story from her perspective to understand it.

But even this group of friends are not 100% accepting and understanding of others. Makani has an off-and-on relationship with a kid named Ollie (Theodore Pellerin, BOY ERASED) who has a reputation of being “fucked up” and “a sociopath,” but completely without the James Dean bad boy glamour of, say, Rod in A NIGHTMARE ON ELM STREET or Billy in SCREAM. Makani gets back together with Ollie out of loneliness and realizes she really does care about him, but when they end up going to the “Secret Party” not only does she hide from her friends that she came with him, she doesn’t stand up for him or say anything when they insult him. Not cool at all.

I didn’t think about it while watching, but Makani has sex, and it does not doom her or have any negative consequences. It doesn’t even seem unhealthy at all. They might’ve put that in there to be sure they’re not following the “the virgin survives” thing pointed out in SCREAM, and if so I appreciate them not underlining it too much. It seems organic.

Director Patrick Brice is the guy who did CREEP and CREEP 2, which I currently have not seen, but I know plenty of people who like them. The screenplay is by Henry Gayden (EARTH TO ECHO, SHAZAM!), based on a 2017 book by Stephanie Perkins, who according to her bio is “a New York Times, USA Today, and international bestselling author of books for teenagers and for adults with teenage hearts.” Judging from the plot summary on Wikipedia, the movie is faithful to a point, but the killer doesn’t have the same shtick or motive, which probly explains why the title seems a little off for the movie. She wrote another one called The Woods Are Always Watching that has a cover making it look like part of a series, but apparently if anything it’s a “companion” and not a sequel.

Asjha Cooper Burkely Duffield Dale Whibley Diego Josef Henry Gayden Jesse LaTourette Markian Tarasiuk Patrick Brice Sarah Dugdale slashers Stephanie Perkins Sydney Park Theodore Pellerin whodunit slashers William MacDonald
This entry was posted on Friday, October 22nd, 2021 at 9:59 am and is filed under Horror, Reviews. You can follow any responses to this entry through the RSS 2.0 feed. You can skip to the end and leave a response. Pinging is currently not allowed.

8 Responses to “There’s Someone Inside Your House”