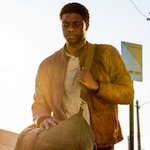 The specific version of this type of story that MESSAGE FROM THE KING reminds me of most is THE LIMEY. That’s both a compliment (I love THE LIMEY and movies like it) and bad news (unsurprisingly it’s not as good as THE LIMEY), but I couldn’t avoid the comparison. Instead of British he’s South African, instead of a daughter it’s his sister, and instead of her being involved with an older music producer it’s an older movie producer. But it’s a similar thing of a guy from another culture going around to rich people parties, barging into front businesses, angering macho thugs who don’t know who he is and underestimate him, playing dumb but exploding into a few sudden bursts of brutal violence.

In the opening scene, Boseman’s character Jacob King assures customs agents that despite only having $600 and no credit cards he really will leave in a week. It’s true that he’s not looking for work; he’s checking on his sister Bianca (Sibongile Miambo, HONEY 3: DARE TO DANCE), who he hasn’t seen in years, but got a concerning voicemail from. She’s not at her old address, but he talks to her former neighbor/friend Trish (Natalie Martinez, DEATH RACE, THE BAYTOWN OUTLAWS, THE LAND), who leads him to her landlord (Dale Dickey, BLOOD FATHER, HELL OR HIGH WATER) who leads him to some guy who paid her rent (Lucan Melkonian), etc. He follows the trail while staying at a shitty motel where he walks in on sad looking resident Kelly (Teresa Palmer, KNIGHT OF CUPS, POINT BREAK remake) as she resorts to prostitution to feed her daughter (Ava Kolker, INSIDIOUS: THE LAST KEY). They become friends after she sees him at a diner and thanks him for not narcing her out. 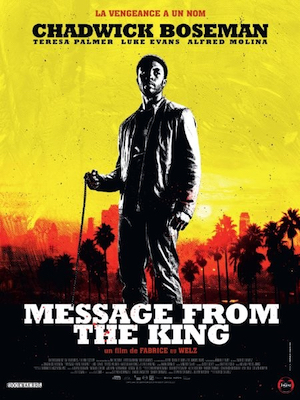 The information about who he is and what’s going on is parsed out a little bit at a time, which I enjoy. Some of what does eventually come out I didn’t entirely follow, but it’s a pretty good journey. The few bits of violence are pretty well done by second unit director/stunt coordinator Wade Allen (HOTEL ARTEMIS), with a nice touch of Jacob using a beaded necklace (whip?) and bike chain both to strangle guys and to wrap around his fist. He also has some good fight moves (his stunt double is Travis Parker, who doubled Will Smith in GEMINI MAN and BAD BOYS FOR LIFE).

I can’t claim to know L.A. very well, but this movie feels fairly accurate to my impression of it. I like how it shows a range of class, from the people struggling to get by in a shitty $65 a day motel to the coke snorting hipster partiers to the guy with a bunch of lackeys and a mansion in the hills. Jacob follows a path from desperate addicts to the decadent upper classes who exploit them, and he finds two effective douchebag villains: questionable-dentist-to-the-rich Dr. Wentworth (Luke Evans, NO ONE LIVES) and pervert-movie-producer-in-a-tracksuit Mike Preston (Alfred Molina, SPECIES). Along the way there are lots of little bit characters adding flavor to the world, like George, the slobby motel clerk behind dirty plexiglass, Trish’s seemingly shitty but turns out understandable boyfriend Bill (Jake Weary, ZOMBEAVERS), or the guy at the Korean market (Joe Seo, GRIDIRON GANG, Cobra Kai) who feels sorry for Jacob and helps him with a few things. There’s also an enjoyable run-in with a drug dealer played by Tom Felton (the HARRY POTTERs, RISE OF THE PLANET OF THE APES), and I didn’t realize it was him, but it’s another fiercely punchable character to add to his catalog.

I don’t really know where the South Africa angle comes from – director Fabrice du Welz (CALVAIRE, VINYAN) is Belgian, and I think writers Oliver Butcher & Stephen Cornwell (UNKNOWN) are American – but I guess “he was in a South African gang” is a novel tough guy origin story, and Boseman seemed to love doing accents. I’m not clear if this one played any part in getting him BLACK PANTHER, but after a few years of loving that story about creating T’Challa’s accent to be free of colonial influences, I have to admit I can’t tell the difference between his Wakandan and his South African. But I trust he knew the difference.

There are a few things that I didn’t think landed quite right. One is when Dr. Wentworth starts profiling Jacob based on the quick look he had at his teeth. “You can tell alot about a man from his teeth.” Another is just how dark and gross it gets in the climax, as it seems to teeter on the edge of homophobia. And there’s a third thing I’m not sure about, to be discussed in the big-ass-ending-spoiler-zone coming up. But most of these things I respect because they’re taking big swings. Especially the teeth thing. I didn’t think it worked and also I kind of love it. I wonder if it would’ve worked if it was Nic Cage saying it instead of Luke Evans?

MESSAGE FROM THE KING is no THE LIMEY or DESTROYER, but like Boseman’s later 21 BRIDGES it has some interesting ideas and personality bubbling beneath its good-if-not-great rendition of the old standards. I’ll always be sad he didn’t get to explore that area more, but at least he got started.

BIG-ASS-ENDING-SPOILER DISCUSSION SECTION. If you watched this you know there’s a this-changes-everything twist during the epilogue – Jacob arrives home at an airport in Capetown, where he’s saluted, and we learn that he’s a police detective. His youth as a gangster was passing for the explanation of why he could and would handle this situation the way he did – now we see why he approached it as an investigation. But we’ve been siding with this anti-hero the whole time – are we expected to come away with an “Oh good, he’s not a criminal anymore, he’s a good guy” type attitude? Or more of a “Well, shit, go figure, this crazy fucker is a respected police officer”? I’m not sure, but I guess I lean B, because police were so absent for most of the movie and then we met those two officers who seemed like standard racial profiling bastards, then turned out to be working as actual hired killers as well. And here’s one who went and killed a bunch of people and pretends to his colleagues that his sister is still alive. Also, note Preston’s pathetic “Plus, you’re black—“ when trying to explain why he thinks he can get away with killing Jacob. It’s not one of those movies that doesn’t notice what’s going on in the world. So I’ll stick with my preferred reading.

Alfred Molina Chadwick Boseman Dale Dickey Fabrice du Welz Jake Weary Joe Seo Luke Evans Natalie Martinez Netflix Oliver Butcher Sibongile Miambo South Africa Stephen Cornwell Teresa Palmer Tom Felton Wade Allen
This entry was posted on Friday, September 4th, 2020 at 10:31 am and is filed under Action, Crime, Reviews. You can follow any responses to this entry through the RSS 2.0 feed. You can skip to the end and leave a response. Pinging is currently not allowed.

4 Responses to “Message from the King”