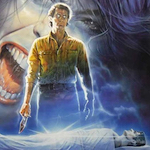 Whatever Akkad’s deal was, he never hit another one out of the park like the first HALLOWEEN. Eight of his twelve credits are on HALLOWEEN movies, none of them half as good as Carpenter’s. But I didn’t know what to expect from his one non-HALLOWEEN horror production, 1985’s APPOINTMENT WITH FEAR.

It’s not on streaming or on DVD in the U.S. IThere is a PAL disc from Spain, but it’s currently listed at $134.33 + $3.95 shipping on Amazon. I rented it on VHS, and when I picked up the box I noticed an obvious red flag: “Directed by Alan Smithee.” But as time passes there are fewer and fewer promising slasher movies that haven’t been discovered by me, Arrow, Vinegar Syndrome, Code Red or somebody, so when I’m slasher searching these days I gotta take risks. Mr. Smithee in this case is Ramsey/Ramzi Thomas, a script consultant for LION OF THE DESERT (a 1980 historical epic directed by Akkad), here working as director for the first and last time. 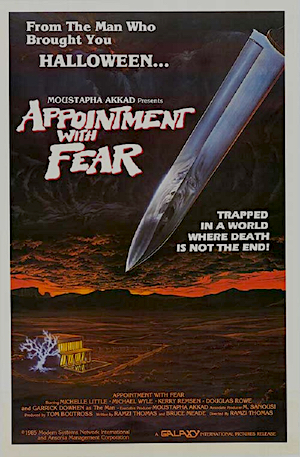 There’s a parallel to the HALLOWEEN sequels in APPOINTMENT WITH FEAR’s emotionless, indestructible killer (Garrick Dowhen, LAND OF DOOM) relentlessly trying to kill a family member. In this case it’s his baby, for ritualistic purposes. We’re told he’s “Attis, King of the Woods” and has to kill his offspring to be king for another year. (Not sure what he plans to do to renew his subscription the year after that.) He’s indestructible because, though he appears to be there in a corporeal sense, we’re told he’s actually in a coma at a mental hospital. He can project himself somehow. Or, as one of the other patients puts it, “he has long arms.” (You may recognize that patient as Mike Gomez, the “I’ll just check with the boys down at the crime lab” cop from THE BIG LEBOWSKI.)

There’s a loner guy who knows about Attis and tries to stop him. Instead of his doctor, like Loomis, he’s a police detective named Kowalski (Douglas Rowe, CRITTERS 2). Like Loomis he’s got an old time private eye vibe. No trenchcoat, but he wears a fedora.

As is tradition, a group of young women and some boyfriends have a small party – “All the girls getting together before graduation” – and get attacked by the guy, with one central young woman seeming to have more awareness of the threat and trying to do something about it.

Although it might sound on paper like something along the lines of HALLOWEEN, every single thing they put on top of this skeleton makes it something entirely different. That’s largely a bad thing, because everything about the filmmaking – from the acting to the pacing to the synth score to the cinematography by Nicholas von Sternberg (DOLEMITE, DISCO 9000, X-RAY, NO RETREAT NO SURRENDER 2) – seems like amateur hour compared to HALLOWEEN. Or by regular standards. But also everything about the movie is five degrees more weird than your usual HALLOWEEN ripoff, intentionally so, I think, and mercifully not winky about it. It really seems like Thomas was hired to make a normal horror movie but he kept asking how he could make each element quirkier than expected. It’s not any scarier than most of the obscure only-on-VHS stuff I can still find these days, but it’s a hell of alot more interesting. Though it doesn’t feel like a legit horror movie, it’s at least a distinct one. 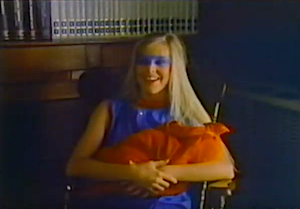 In the opening, Attis stabs his wife to death, but before he gets to her she manages to hand off her baby to a random young woman named Heather (Kerry Remsen, A NIGHTMARE ON ELM STREET 2, PUMPKINHEAD, GHOULIES II). “Can I keep him? Just for the night?” Heather later asks her friend. “Since the accident” Heather “has been so tense, frightened,” we’re told, and I don’t know if that’s supposed to explain why she wears blue face paint around her eyes, looking kinda like Pris in BLADE RUNNER or Furiosa in FURY ROAD. She’s introduced doing mime for her grandpa’s birthday party while her friend Carol (Michele Little, RADIOACTIVE DREAMS, MY DEMON LOVER, MYSTERY DATE, APOLLO 13) sits in the bed of her pickup truck, smiling and recording their conversations with spy equipment and a boombox.

If there’s an explanation for why Carol surveils people I missed it. I think it’s just one of the quirky things these characters do, and I like that about it. We also meet “Mr. Personality himself” Bobby (Michael Wyle, VALLEY GIRL), a dude in a trenchcoat with a dangly earring who shows up at Carol’s place to try to hassle her into dating him. He drives a motorcycle with a mannequin in the sidecar.

Also Carol allows a “bum” named Norman (Danny Dayton, “Syd” from THE DARK BACKWARD) to live in the back of her pickup because “he’s gotta live somewhere,” driving around with him, saying hello to him when she sees him, like he’s just her neighbor. Very nice of her (though it gets him killed).

These characters are pretty funny, intentionally so. When Carol tells Bobby (in her odd, flirtatious way) the van parked across the street is a guy who’s been following her, he gets on his motorcycle just to drive across the street, pop one of its tires, and come back. “You see, you got nothing to fear. That van’s indefinitely immobilized.” Then he asks if he can go to her party and when she says “Nope” he jokes, “That’s all right, I’ll just follow you, you can’t stop me.”

“Excuse me,” she says. He watches as she walks over, pops a tire on his sidecar and hands him the screwdriver she did it with. “Bye.” I thought this made her pretty cool, and he definitely agrees. He tells her he loves her.

The gathering is at a cool location – Heather’s mom’s rich boyfriend Georgie’s “dream house in the canyon… built by a very famous architect.” Their friend Ruth (Deborah Voorhees, AVENGING ANGEL, FRIDAY THE 13TH: A NEW BEGINNING) gets there early, has a slice of cheese, gets creeped out by the antique doll collection, goes for a topless swim, and gets stabbed by Attis. Cut to shots of the pool, the pianos, a statue, the kitchen, the hot tub, the rec room, her dead face, a doll’s face. (Pure Smithee.)

Bobby does show up and, after first pointing an assault rifle (or something with a banana clip, I don’t know guns) to his head, Carol seems to be happy he’s there. Pretty soon there’s a scene where they play flirtatious hide and seek, start going at it on the floor, and it pans up to the creepy antique doll again. Fuckin pervert doll. When they’re done they discover a modern dance troupe performing around a May pole out back (also with blue eye strips and other face paint). It turns out to be set up by their friend Cowboy (Vincent Barbour, “Jock #2,” MY SCIENCE PROJECT), who seems like a redneck jock guy but comes in and dances with the troupe. Interesting guy.

Eventually Attis starts attacking them and it turns into a siege. He leaps through the window as if thrown through it. Carol uses gas from her truck to light him on fire – he just stands there calmly and burns and then mystically steps out of the flames, as if leaving his own body.

My favorite thing about Kowalski is that there are two different scenes where he tosses a cigarette into his car and almost catches it on fire. The second time he’s stopped in the middle of nowhere because a dog (controlled by Attis?) is blocking the road. Then the car starts rolling backward down the road on its own and explodes. I don’t know how to do this scene justice – he just stands there and watches it happen, it’s very deadpan. I love it. 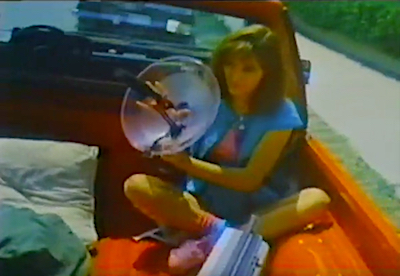 Same goes for the spy equipment. She does sort of use it to try to listen for Attis outside of the cabin, but it doesn’t end up being important. It’s just her thing. Doesn’t need a narrative purpose.

At the end Attis tries to do some kind of a King of the Forest ritual with the baby and a tree. Carol shoots him even though he’s holding the baby. Doesn’t work. But Kowalski says “Use the pole, Carol.” Not even loud enough for her to hear, so it really does seem like an Obi Wan/“Use the Force, Luke” thing. She impales him, he explodes into a shower of leaves, and flowers bloom on the tree. Despite some boring exposition scenes earlier I feel like there was some mythology that didn’t get explained enough.

The screenplay is credited to Gideon Davis (no other movies) and Bruce Meade, who seems to have been most associated with director Jonathan Kaplan – assistant on HEART LIKE A WHEEL, played a corpse in his episode of Fallen Angels, story credit on his episode of Rebel Highway, second unit producer on BAD GIRLS, writer of his episode of Picture Windows, second unit director for the pilot of In Cold Blood and for BROKEDOWN PALACE. He was also assistant director on Jim Wynorski’s THE RETURN OF SWAMP THING.

Akkad’s son Malek got his first movie credit as a p.a. on this one. Ten years later he became an associate producer on the HALLOWEEN movies, and he took over as producer after his father’s death in a 2005 terrorist bombing.

The credits tell us that score composer Andrea Saparoff programmed the music on a Fairlight CMI, a competitor to the Synclavier that coined the word “sampling” and was used by Herbie Hancock, Thomas Dolby and Peter Gabriel, among others. Stevie Wonder used it to play Journey Through the Secret Life of Plants on tour, though not on the album. Jan Hammer was a spokesperson, and used it on the Miami Vice theme (and in the video). But it became so associated with artificiality that Phil Collins specified on the liner notes of No Jacket Required that he did not use one. Sort of like Jay-Z’s “D.O.A. (Death of Auto-Tune).”

Saparoff became a prolific composer for commercials and has three albums of catalog music: Harmonic Journeys, Bottles Strings and Found Things and Motivational Minimalism. She also did the score for OUTSIDE THE LAW starring Cynthia Rothrock.

Thomas never directed again, but whatever it was that led to him taking his name off of this, it doesn’t seem to have ended his relationship with Akkad – he’s credited as a producer on HALLOWEEN 5. Later he was a line producer on BOILING POINT and STARGATE, but that was it.

I wish at least some of the horror stuff in this worked, because combined with the oddness and quirk and the likable lead I think that would be enough to make it a minor gem. As it is, I do think it’s unusual enough to be worthy of a nice restoration by one of the aforementioned labels.

27 Responses to “Appointment With Fear”