Flooding With Love For the Kid

FLOODING WITH LOVE FOR THE KID is the new low budget adaptation of the book First Blood by David Morrell. It’s a very different take than Stallone’s version and in some ways more faithful to the book.

In 1970, in Madison, Kentucky, a scruffy young man named John Rambo stands drinking a bottle of Coke. Sheriff Will Teasle, recognizing Rambo as an outsider and not liking his appearance, picks him up and drops him outside of town. He seems satisfied that it’s a fair and reasonable way to discard the riff-raff. But Rambo just turns around and walks right back into town. Thus begins the batrtle of wills between two men too stubborn to back down, too hung up on personal issues to see things clearly, too set in their ways to let things turn out reasonably. The thing escalates from disagreement to arrest to escape to manhunt to bloodbath.

Like in the book, Teasle is as much the protagonist as Rambo is. There’s more emphasis on his Korean War record and how that creates a generation gap with Vietnam vet Rambo. There’s a subplot about his impending divorce, which Orval (the guy with the hounds) suspects he’s taking out on “the kid” they’re hunting. Part of his problem with his wife is that he wants to have kids and she doesn’t, so that affects how he sees this kid too. Of course, that’s kinda between the lines, but the movie even puts lines from the book onscreen a few times rather than adding awkward expository dialogue.

The best part of the Stallone version, when Rambo breaks down and blubbers about what happened to him and his friends in the war and how useless he feels back home, was invented for the movie, so we don’t see it here. The title is a reference to the very end of the book and puts the emphasis not on the disagreement of who drew first blood but on the father-son type relationship that develops between the two enemies over the course of this whole ordeal. This is the emotional core of the book and of this version of the movie. Brian Dennehy’s Teasle pretty much was an asshole that hated Rambo for no good reason, in this version and the book he has more reason to hate him but ends up really caring about him.

Stallone’s version will always be a classic, but it’s cool to see a version that’s a little more like the book. The portrayal of Teasle is the most substantial similarity, but there are plenty of little things too: the naked escape, the encounter with moonshiners, the massive body count. In FLOODING, like the book, he kills all the people that he encounters. But even in this version he’s not quite as crazy as in the book, for example it doesn’t mention that before coming to Madison he already killed some guys that tried to mug him. Or that he even admits to himself that he might be looking for a fight.

FLOODING’s encounter with Orval’s dogs is more like the old movie than the book, he gets attacked by three dogs and kills them in self defense. In the book there are six of them and he attacks them as part of his strategy. Also in the book he kills an owl and eats it, in this version he kills a small teddy bear.

Oh yeah, I should mention this: it’s a much lower budget than the old one, and more independent. In fact it was made by one guy named Zachary Oberzan. Yeah, he directed it and shot it with no crew and plays all the parts. Even the women and the three dogs. Also, not sure if this is relevant, but he filmed it entirely in his New York City studio apartment. Because of that it’s a little different of a feel than FIRST BLOOD in my opinion. Maybe partly because it’s quieter and about 15 minutes longer, but mostly I think because of how it’s one guy playing all the parts in his apartment. You may disagree, and all opinions are valid on this. 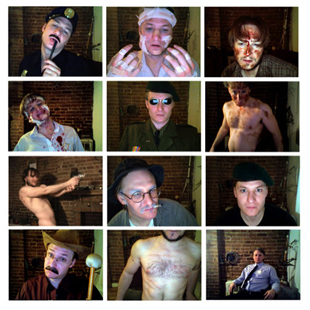 So maybe a better comparison than FIRST BLOOD would be RAIDERS OF THE LOST ARK: THE ADAPTATION, because it’s way too ridiculous to take as a regular movie, but also too elaborate and heartfelt to dismiss as a joke. You find yourself watching it on multiple levels. There’s the BE KIND REWIND level of amusement at his homemade ingenuity (like when he crudely split-screens two of himself in front of a ceiling fan balanced upside down between two chairs to look like he’s flying in a helicopter) but it’s surprising how much it can pull you in as a re-telling of a classic story.

Oberzan is not crazy, he’s obviously aware of the absurdity of what he’s doing. He requires you to use your imagination – a living room with a few scattered branches becomes a forest, a black blanket in a shower bedcomes a mud bank during a rain storm, a toaster becomes a radio, he doesn’t hide CD racks and book shelves and shit. In one of my favorite moments Rambo is hanging from a cliff (a bunk bed) and there’s a shot that’s really just zooming in on a little branch on the floor, but you know exactly what it represents: one of those VERTIGO type shots of the ground far below to mean “oh shit, I’m really high up!”

If he was just trying to be funny or if it was typical home movie acting then it might be hard to sit through, but the secret is that he performs it sincerely and he’s a pretty good actor. I wasn’t surprised to read that he also does this on stage as a one-man show. I was hooked from the opening scene as he goes back and forth between stubborn, stoic Rambo standing and staring as Teasle exasperatedly talks him into the car. I bought into the illusion that it was a conversation between two different people. The fact that they’re the same actor even fits thematically since the story’s largely about the similarities between these two men.

Oberzan throws himself into it: crying, dying, yelling, running around naked, diving to the ground, doing a couple accents. He plays Teasle dragging the dying body of Orval, who he also plays. He had to have carefully planned out the shooting schedlue for the entire movie in order to film all the parts. Not only does he change outfits for each character, as Rambo he has a beard.

This is not a “real movie,” but it’s a real achievement. Of those members of society who would have the capacity to make something like this, how many would actually come up with the idea and then go through with it? Just this guy, from the looks of it. And I bet there’s no support community for a one-man FIRST BLOOD the way there would be if he wanted to make a movie about Star Treks or Fireflies. He must’ve worried that the neighbors thought he was nuts, in there talking to himself all day, running out into the hall with his dick swinging, pretending he’s escaping from jail.

There is very little in this world that warms my heart more than this type of dedication to an absurd but awesome concept. You have to admire somebody believing in and going through with this project and not backing down. Just as the RAIDERS adaptation helped inspire me while I was finishing up Seagalogy I hope this movie will inspire people to put in the elbow grease to follow that crazy creative dream that nobody really understands but that they know they must do.

For some reason you can’t yet get FLOODING WITH LOVE FOR THE KID out of a vending machine at Safeway like we prefer to for most great works of cinematic art, but you can order it from the dude. He probly burns it on in a computer in the same apartment where all that shit went down.

p.s. that would be cool if Stallone got this guy to do a part in EXPENDABLES 2, like the idealistic young CIA rookie that learns a lesson about how things really work in the big leagues or whatever.

David Morrell Zachary Oberzan
This entry was posted on Monday, October 3rd, 2011 at 10:25 pm and is filed under Action, Reviews. You can follow any responses to this entry through the RSS 2.0 feed. You can skip to the end and leave a response. Pinging is currently not allowed.

23 Responses to “Flooding With Love For the Kid”