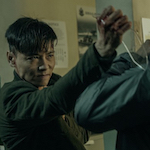 But that’s not exactly what we’ve gathered for today. This is a different thread that I’ve been following since KILL ZONE 2. One of the highlights of that movie was Jin Zhang, now known here as Max Zhang, who played the lead henchman – a dapper, suit-wearing psycho with kicks like scalpels. He had such an entirely different vibe as the broody handsome rival in IP MAN 3 that I didn’t even notice it was the same actor. So now I pay more attention to him. His most recent release INVINCIBLE DRAGON (original title: 九龍不敗 [KOWLOON UNBEATEN]) is not in the same ballpark as his very good starring vehicle MASTER Z: THE IP MAN LEGACY (2018), and it’s sloppier and stupider than THE BRINK (2017). But I enjoyed the hell out of it because it has some of that precious Hong Kong action craftsmanship and production value, infused with the “are you kidding me right now?” lunacy of a really off-the-rails DTV movie, while managing to showcase some of the qualities that make Zhang stand out from other action stars.

I knew we were in for something memorable in the opening scene. Zhang’s character Kowloon (sometimes called Mr. Kow) is in a barrel being tortured by a drug lord (the great Lam Suet, THE MISSION, EXILED, VENGEANCE, THE LEGEND IS BORN: IP MAN, DRUG WAR, etc.) who has fingered him as an undercover cop. Asked about the intricate dragon tattoo that covers much of his upper body, Kowloon tells a story about when he was a little boy and fell in the water and was saved by a 9-headed dragon. We see it in flashback, with pretty decent CG creature effects. 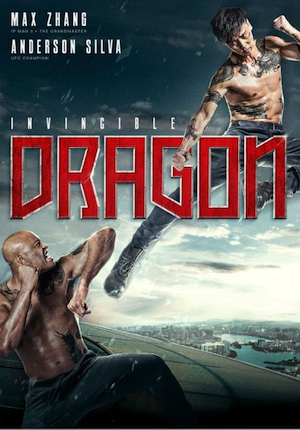 And then the drug boss says “FUCK YOU – I HAVE THE SAME TATTOO!” and tears open his shirt to reveal two small, shitty dragon tattoos on his belly, each in a different bad cartooning style, one of them more faded than the other so that they really don’t go together. I mean I’m already wrapped up in “is this really a movie about literal dragons?” and I get this excellently timed joke with the perfect bad tattoo designs. And then Kowloon reveals that actually he could get away at any time and he jumps up and there’s a big fight and foot chase courtesy of action choreographers Stephen Tung Wai (A BETTER TOMORROW, BODYGUARDS AND ASSASSINS) and Jack Wong Wai-Leung (LEGENDARY ASSASSIN).

Which reminds me, I LOVE MOVIES!

Also I want to note that in this portion of the movie Kowloon is wearing eyeliner and flashy bleached jeans.

I’ve heard of director Fruit Chan (THREE… EXTREMES) but I don’t think I’ve seen anything else by him. He co-wrote with Lam Kee-To, who was involved in many Hong Kong classics (THE SWORDSMAN, A CHINESE GHOST STORY II, THE MASTER, THE BRIDE WITH WHITE HAIR). It’s possible that there were post-production issues, because they use some young guy’s awkward third person narration to explain or comment on some parts of the story, but judging from some of the other oddball choices that might’ve been what they wanted all along.

Kowloon shoots the drug kingpin in front of a bunch of people at a charity dinner, so he gets transferred to the boonies, except that doesn’t seem to affect much because he’s heading up a case to catch a serial killer whose victims are all “lady cops.” But during a sting operation he gets shot and his fiancee (Stephy Tang, BADGES OF FURY) disappears, believed dead.

He gets suspended (I don’t know why they didn’t just have him quit, but oh well) and becomes an underground boxer in Macau. Respectable choice. He has long hair now, allegedly has OCD and does obnoxious things like headbutt the back of an innocent lady’s seat on the light rail until she moves. This is where it becomes important that it’s Max Zhang in the role and not someone else. He’s having a great time creating this character. Standard scenes like “local cop approaches him in the grocery store to ask for help because he believes the killer is back” are made fascinating and darkly humorous because you just want to watch what his reaction (which, in that case, includes knocking over a large store display). People tell him he looks like shit and it’s true, it’s not just the usual five o’clock shadow and wrinkled shirt. This is much more of a performance than you expect from the hero in this type of movie. I could compare it to what Van Damme has been doing in this section of his career, but honestly Zhang reminds me more of Johnny Depp back in the day.

Kowloon’s revived investigation brings him to a gym in the top of a tower run by celebrity casino performer Lady (JuJu Chan, CROUCHING TIGER, HIDDEN DRAGON: SWORD OF DESTINY, SAVAGE DOG, JIU JITSU), and he realizes he knows her husband, Alexander Sinclair (former UFC Middleweight Champion Anderson Silva). Their reunion is one of those intoxicatingly beautiful and not-logical cinematic moments that helped me fall in love with Hong Kong cinema in the ‘90s: Kowloon walks into a back room at the gym, where there is a sauna. Suddenly Sinclair’s bald head rises APOCALYPSE NOW style out of the water. Without us really getting a clear look at him he leaps out of the water in slow motion, doing a spinning kick, and Kowloon spins around with a towel to block all the water that splashes at him, before Sinclair disappears back under the surface like a sea monster.

Silva as Sinclair is one of the reasons why I cannot call this a good movie, and also one of the things I really enjoyed about the movie. In real life his first language is Portuguese, and he uses a translator for fight interviews, but in the movie he has to speak English as a neutral language with Zhang. He speaks it well, but I think it makes it difficult for him to get across that natural charisma that some athletes use to overpower their stiffness as actors. Also, he has a surprisingly high voice that contrasts with his menacing appearance, which I find kind of endearing but also definitely comical.

Most movies facing this sort of situation choose to give such an actor minimal dialogue. He has a formidable physical presence that’s apparent even to those who don’t know he’s considered one of the greatest MMA fighters to ever compete, and he’s a thrill to watch in his fight scenes (which of course incorporate lots of grappling into a more traditionally cinematic style). But they still insist on making him talk and even whine quite a bit. I’m not complaining, but I know I’m not necessarily enjoying it for the reasons intended.

In this paragraph I need to discuss what is TECHNICALLY A SPOILER. I found it really funny that the movie acts like you should be surprised when Sinclair turns out to be the killer. Kowloon and the police have been considering Lady the prime suspect even though we’ve seen the killer depicted as a tall, broad-shouldered person. What makes it extra funny is the dramatic “Eureka!” moment where Kowloon is concentrating and flashing through everything that has happened and suddenly opens his eyes and says “Sinclair!” It kinda reminds me of that part in PEE-WEE’S BIG ADVENTURE where Pee-wee is talking to the cop and says, “Everyone wanted my bike. This morning, right before it got stolen, Francis offer– FRANCIS!” And it gets approximately ten times goofier when we learn his motive (SPOILER FOR THE KILLER’S MOTIVE): Kowloon defeated Sinclair in a boxing match for a police charity and Sinclair’s son felt humiliated that the female police officers in the audience laughed at him and then he got upset at his dad in the car and yelled “You’re not the best! Kowloon is the best!” and got out of the car into traffic and got run over, so Sinclair is getting his revenge by murdering female police officers and then Kowloon. And let’s just say that Silva does not have the kind of acting acumen to be able to yell about all this (or his tattoos being better than Kowloon’s) and make it sound convincing.

Let me tell you some other great joys of this movie. There’s a part where Kowloon puts in earbuds and a rock song plays and suddenly there’s an out-of-the-blue training montage that includes classical ROCKY elements like putting raw eggs in a blender but ends with him hanging upside down in a crowded light rail car. There’s a fight scene on a light rail car that crashes and by spinning around on the bars they continue fighting even as the car rolls. There are two long and well-choreographed location-based duels between Kowloon and Sinclair, one using the police headquarters and its established geographical features, the other taking advantage of all the great equipment available in Lady’s gym. And by the way – remember I mentioned that the gym is at the top of a tall tower? When they establish early on that it includes a bungee jumping platform they are aware of their responsibility to follow up on this, which they do in the form of a ridiculously green-screened mid-air bouncy fight.

I loved all of that, and that’s not even the weirdest stuff in the movie. That would be, I think, anything having to do with the titular indestructible creature. Kowloon believes (literally, I think) that his dragon tattoo is alive, but injured because of a bullet hole in it. He has some sort of a courtship with Sinclair’s naturopath Dr. Wong (Annie Liu), but he won’t show her the tattoo until she surprises him with the sight of the tree tattoo that covers her double-masectomied chest. Meanwhile, he really does believe he saw a dragon when he was a kid, and late in the movie he tries to summon it, something that even the narrator says is “absurd.” So I’ll let you guess whether or not a literal dragon shows up at some point during the action climax. Who is to say?

Honestly there’s enough in here that I’m sure I would’ve had fun with it even with a blander protagonist, but it just makes me so happy that Zhang seems to want to play weirdos. He kinda did it in his American-DTV-sequel outing ESCAPE PLAN: THE EXTRACTORS, but here he takes it a couple steps further. He gets to try on a couple different looks and has many scenes about being out of it and making everyone uncomfortable. In the final duel he and the villain both keep cackling at each other. In the very last scene he asks Dr. Wong if his pulse is normal and she says, “You’ll never be normal.”

Anderson Silva Annie Liu Fruit Chan Jack Wong Wai-Leung Juju Chan Lam Kee-To Lam Suet Max Zhang Stephy Tang
This entry was posted on Wednesday, January 27th, 2021 at 11:16 am and is filed under Action, Martial Arts, Reviews. You can follow any responses to this entry through the RSS 2.0 feed. You can skip to the end and leave a response. Pinging is currently not allowed.