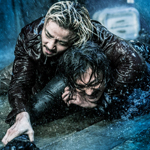 He’s introduced just going fuckin berserk in a one-man raid on a… penthouse crackhouse? It’s some sort of trashed drug den with broken windows high enough for him to throw people out of and have them destroy the police cars they land on. Psychedelically lit with primary colored lights and with a questionable amount of electric guitars on the soundtrack, he spins and kicks and chops through crowds of criminals. Not all of them survive.

And I think they say somebody he killed was a cop? At any rate he’s charged with manslaughter and stays in prison for six months before he gets acquitted. When he’s released he heads back to work with bleached hair, loud polyester shirts and red pants, lookin like that dude in ICHI THE KILLER, and making his supervisor (Gordon Lam, EXILED, IP MAN, DRUG WAR, FIRESTORM) ask if he’s a gangster now. His experiences have not taught him to fuckin cool it, in fact quite the opposite. He now believes the only way to redeem himself for the deaths he caused is to eliminate all of the criminals who he was trying to eliminate before when he killed a bunch of people. 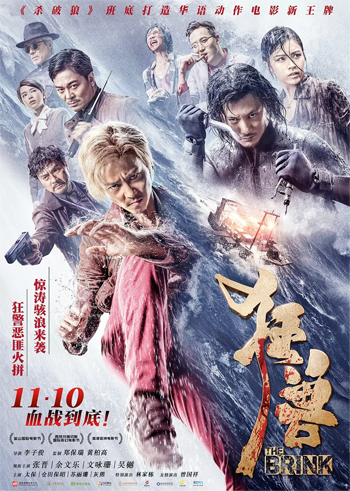 I assumed at first it was a drug ring, but actually he’s after a stoic gold smuggler called Shing (Shawn Yue, LEGEND OF THE FIST: THE RETURN OF CHEN ZHEN), who says he worships The Sea Goddess, and I kept going back and forth as to whether to take that literally. The story diverts from Sai Gau to show us a power struggle on Shing’s boat when his boss’s spoiled prick of a son Sheng (Derek Tsang) tries to eliminate him. Though he’s clearly the villain and doing bad things, Shing’s struggle with less honorable people gives him an anti-hero appeal.

Sai Gau is the other side of the coin, a good guy who’s not always easy to root for. Though the movie certainly indulges in glorifying the Cop Pushed Too Far Who Plays By His Own Rules, there seems to be some interest in subverting that as well, particularly with his painful incompetence at human interaction. Early in the movie he meets with his adopted daughter Ke-Yan (Cecilia So, THE MONKEY KING 3) to tell her that since she has just turned 18 he is no longer her guardian, her allowance will be deposited into her account automatically and she doesn’t have to meet with him anymore. He doesn’t even turn to face her, and not because he’s choked up or anything. Somehow she’s attached to him, even though this is the first time they discuss the fact that he adopted her because he killed her dad. And then he shows zero remorse.

Later, when Ke-Yan tells him she’s pregnant, he gives her what seems like his most compassionate advice ever, telling her that whatever she decides to do if she believes in it she should stick with it. But later, when she tells him she’s getting an abortion, he puts his hands on her shoulders, looks into her eyes, and talks her out of it. I think the movie agrees with him, and maybe they’re right, but talk about a dude who doesn’t mean it when he pretends to respect a woman’s choices! And he assumes (apparently correctly?) that she made her decision based on worrying what other people would think. And tells her that it’s easy to raise a kid, apparently unaware that it only seems that way to him because he didn’t evern remotely do that for her. It’s pretty corny to see this bleach-blonde Cop On the Edge deciding he’s the dad on 7th Heaven, but maybe more irony is intended than I’m detecting.

Sai Gau has a partner named A-de (Wu Yue, PARADOX) who he basically harasses into helping him on his last day as a cop (and after he becomes a civlian). It’s a funny spin on the “X days before retirement” cop cliche because in this case he’s resigned specifically to avoid being partners with this crazy asshole who just got out of prison for throwing dudes out of a building. And Sai Gau getting him involved in this case has a major effect on his destiny above and beyond being abducted and held hostage hanging upside down for most of the last act.

To me the most intriguing supporting character is Suet (Janice Man, COLD WAR 2), Sheng’s sidekick who I think he saved in Thailand or something (?) and whose specialty is causing chaos mixing and tossing exploding water bottles. Though less innocent, she seems to be a parallel to Ke-Yan, someone who maybe shows too much loyalty to a person who helped her once but doesn’t treat her well.

Though it’s not strictly a martial arts film – there’s lots of car crashes, explosions, chases and what not – it will occasionally flare out into flurries of fists and knife slashes, which Zhang is very good at. (Stunt coordinator: Chi Li Chung, GEN-X COPS 2, VENGEANCE, IP MAN: THE FINAL FIGHT.) It’s not sticking to realism, but it goes for a little closer up, a little shakier, a little less agile, and more bound by gravity than the fights in KILL ZONE 2, which some people seem to appreciate, but in my opinion they are fucking crazy. This stuff is cool but I’m not sure the best fight in this (the one in the parking garage) gives me as much joy as whatever the worst one in KILL ZONE 2 is.

The central setpiece is the underwater heist of the gold cache under a casino boat run by Boss Kui (Kurata Yasuaki, MANHUNT), which involves a pretty long and brutal underwater fight in scuba gear, with Sai Gau and A-de passing the breathing apparatus back and forth. It’s a cool scene and obviously incredibly difficult work, so I feel like an asshole admitting that it’s not as exciting as it sounds. Faster paced than the one in THUNDERBALL, but I seem to remember being more thrilled by the one in Jackie Chan’s FIRST STRIKE, and even the short one at the beginning of WOLF WARRIOR 2.

But I was more impressed by the atmospheric final showdown. Sai Gau waits in international waters knowing a typhoon will cause the “water police” to leave and Sheng’s gang to make a play for the abandoned gold. Setting the fight on the deck of a shaky, slippery fishing boat during a vicious rain storm makes it both intimate and extravagant.

THE BRINK is the directorial debut of Jonathan Li, who was an assistant director on INITIAL D, THE LOST BLADESMAN, BLIND DETECTIVE and many others. It’s also the first writing credit for Paco Wong, whose resume as a producer includes SPL, FATAL CONTACT and LEGENDARY ASSASSIN. Cheang Pou-Soi, director of the excellent MOTORWAY and KILL ZONE 2, is one of the executive producers. I don’t think this is on the level of either of those – I’d categorize it as good-not-great. But that’s still a recommendation, and I look forward to more Max Zhang movies.

Cecilia So Cheang Pou-soi Derek Tsang Gordon Lam Janice Man Kurata Yasuaki Max Zhang Shawn Yue underwater fight Wu Yue
This entry was posted on Thursday, September 19th, 2019 at 1:03 pm and is filed under Action, Martial Arts, Reviews. You can follow any responses to this entry through the RSS 2.0 feed. You can skip to the end and leave a response. Pinging is currently not allowed.

28 Responses to “The Brink”