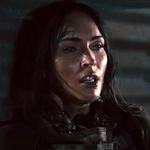 (As is my policy these days, I will note that it’s another movie reveling in the power of modern military gear, and it’s mostly white heroes rescuing white people from Jihadist rebels in Africa. But, you know, accepting that we still make movies like that, it’s an entertaining and distinct one.)

It opens with some evil poachers doing their evil poacher business on a remote farm in East Africa, loading and unloading lions from a truck, alive and dead. They have lions in cages and there are skins hanging up and piles of rhino horns laying around and, you know… I don’t like these guys. I’m against ‘em.

We see the process they go through to climb on top of a cage and shoot a bolt into a lioness, but a guy fucks up and doesn’t realize he didn’t kill her until she’s about to eat his face. Better luck next time, buddy. 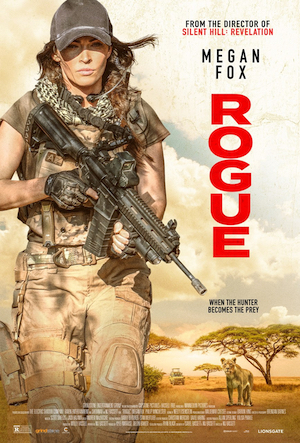 Somewhere not that far away, Sam (Fox) leads an international team of mercenaries on a rescue mission. They sneak up on the compound of crime lord Zalamm (Adam Deacon, KIDULTHOOD) and sneak in using some inside info from former Al-Shabaab fighter Pata (Sisanda Henna). A couple things go wrong: 1) they were tipped off to the wrong building, and have to have their shooters start a gun battle as a distraction to get to the correct one, and 2) there are three girls locked up in cages, not just the governor’s daughter Asila (Jessica Sutton, ESCAPE ROOM) they were hired to save.

The movie has been strong up to this point, but this is where I realized it was more interesting than it could’ve been: Sam only wants to rescue the one girl. Don’t get me wrong – I disagree with her. She’s an asshole. But it’s so rare for the woman on the team – or even the protagonist of an action movie, regardless of gender – to be allowed to be that much of an asshole right off the bat. She’s absolutely going to leave two young women crying in cages because she doesn’t think there’s room in the escape vehicles. After her team talks her into taking all three, she grumbles, “I better not fucking die for doing the right thing.”

Well, obviously she won’t, but a whole lot of people will. If not for doing the right thing, for being involved in this mission at all. They get the girls, but Zalamm and his men give chase, shoot up their Jeeps, blow up their escape helicopter. They’re pretty fucked, but (as is traditional in movies) they’re able to emergency cliff dive, and that gets them far enough ahead to find a hideout, which we of course recognize as the ill-fated lion farm. Hmm, that’s weird, I wonder why nobody’s home? And why there’s some dead guys around and a whole lot of blood but no bullet wounds? Weird.

Often I find the big hairy kitted-out soldier dudes in these movies to be dull and interchangeable, but this one gives them distinct personalities and a convincing team-of-professionals bond. There’s alot of good gallows humor that seems authentic to someone trying to handle a job like this, but it also helps to keep the movie fun despite dealing seriously with some grim material. Especially since they get goofier the more injured they are and the more hopeless it seems.

I really like Elijah (Brandon Auret, DISTRICT 9, ELYSIUM, CHAPPIE), who is unfailingly loyal to Sam in a way that implies they’ve been through some shit together. And Joey (Philip Winchester, THUNDERBIRDS, FLYBOYS), who seems to be holding his tongue when rescued-hostage Tessa (co-writer Isabel Bassett) talks shit about Sam, and therefore is convincing when he vouches for her skills and leadership. Another charismatic one is Bo (Kenneth Fok, TOMB RAIDER, SERENITY, Warrior), who has a memorable recurring gag about getting Backstreet Boys stuck in his head. And Pata is an interesting character who explains the horrible situations that force some people onto these rebel forces, but the girls recently abducted by such people are not eager to offer him understanding.

I think Mike (Greg Kriek, TREMORS: A COLD DAY IN HELL, LAKE PLACID: LEGACY) is the least likable one, and it’s just because he keeps being upset at Sam’s choices – quite reasonably! Not that I agree with him. Aside from that “not wanting to rescue all the hostages” incident her asshole-ishness is all part of the job. There’s a good scene where she talks to Tessa about their respective backgrounds, and they get to understand more where each other are coming from. She even laughs when Tessa jokes about her being a bitch. Moments later they’re under attack and she’s back to yelling orders at her like a drill sergeant, so it seems like she is a caring person, she just has a job to do.

I don’t think I’m alone in believing that Fox seems pretty cool, and that she got a raw deal from the TRANSFORMERS movies and the sexist coverage of her meteoric rise to sex symbol status around 2007-2009. If you don’t believe me, I would like to point you to her episode of the History of Horror Uncut podcast (I don’t really like the AMC/Shudder series it’s a companion to, but this is the raw interviews, which are way better). She has some really good insights into JENNIFER’S BODY, why the story was meaningful to her at the time and how she felt people responded to it.

Anyway, I think she’s really good in this. She makes Sam a relatable character despite her flaws, she convincingly orders a bunch of burly men around, plus she pulls off the physical side of the role, the running around and pointing guns around corners and all that. I hope she does more action roles.

It really is the characters and performances I like about the movie, but the suspense and action are handled well. It’s a fairly shaky/quasi-realistic style, but effective. I wasn’t sure about the lion stuff at first, since there’s that usual problem of lower budget cgi causing animals to leap a little too fiercely and weightlessly. But the sightings are spread out strategically and the FX actually improve – some of the lion shots kinda looked like stop motion to me, which I always dig.

Also, there’s nothing deep about this, but I dig the parallels between the humans and the lions, the way (SPOILER, KINDA) there’s a very determined female sneaking around, fucking up a bunch of people to try to rescue some young ones they have locked up.

The director and co-writer of ROGUE is M.J. Bassett, who has been around since the 2002 WWI-set horror movie DEATHWATCH, which I remember hearing good things about, but I haven’t seen it. I did see SOLOMON KANE (2009), which I was mixed on, but I know plenty of people like it more than I did. She also did SILENT HILL: REVELATION (2012), but in these parts is probly more relevant as director of four episodes of Ash vs Evil Dead and fifteen of Strike Back. More than anything, I’m now more interested in INSIDE MAN: MOST WANTED – yes, the DTV sequel to the Spike Lee movie. I was curious, of course, but now that I know it’s From the Director of ROGUE and shares some of the same cast I know I gotta get to it.

Bassett must’ve had fun on this one, because her next one is called KENYA, and is about an American family who get rammed by a rhino and “their dream vacation turns into a nightmarish struggle for survival in a world where they are the bottom of the food chain.” I hate that when that happens! It’s bad enough being on the bottom of the food chain during the rest of the year, but vacations are supposed to be relaxing.

Adam Deacon Brandon Auret Greg Kriek Isabel Bassett Jessica Sutton Kenneth Fok lion M.J. Bassett Megan Fox Philip Winchester Sisanda Henna
This entry was posted on Tuesday, January 26th, 2021 at 11:18 am and is filed under Action, Reviews. You can follow any responses to this entry through the RSS 2.0 feed. You can skip to the end and leave a response. Pinging is currently not allowed.