After VENGEANCE heroically bloodshedded me in the face it was obviously time to check out some of these Johnnie To movies that I’ve been ignoring even though everybody and their blood brother has been recommending them to me over the years. It’s nice to see that while Hong Kong action cinema has lost the worldwide attention it had in the ’90s there’s still been some people keeping it alive. Mr. To definitely has a modern take on the types of emotions and style we love from that era. So here’s another one of his more recent ones, 2006’s EXILED.

This was made before VENGEANCE with some of the same cast of Johnnie To regulars (Anthony Wong, Simon Yam, Suet Lam, Ka Tung Lam, Siu-Fai Cheung), some of the same Johnnie To subjects (teams of hitmen turning against their boss, Simon Yam) and themes (the ethics of sharing food with blood enemies). In this one a former criminal named Wo (Nick Cheung), who has been exiled from Macau for trying to kill the boss, defiantly returns to his wife and baby. So two groups of gun-toting thugs come looking for him: the guys who are supposed to kill him (Anthony Wong and Suet Lam) and the guys who have decided to protect him (Francis Ng and Roy Cheung). All of them are old friends and work for the same boss, but they got differing opinions. Wong wants to follow orders and execute him, this other guy tells him that Wo saved his life once so he oughta switch sides, etc. 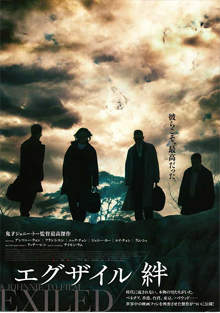 So they have a big shoot out, then they call a time out to talk things over. This is one of the only movies I’ve seen where some hitmen come to kill a guy, but end up helping him move.

The plot ends up sort of following the trajectory of some dudes hanging out. They aren’t very decisive about what to do or where to go. They let their bonds override loyalty to their boss, but take their time coming up with a plan of where to escape to. In fact they start flipping a coin to decide which direction to drive (I thought maybe in homage to the scene at the beginning of YOJIMBO where throws a stick to decide which road to follow). At the end there’s a Red Bull can that gets tossed, kicked and shot around, and that’s probly one of them metaphors. They’re happy to let their lives ricochet around until they hit the ground.

They have the same scowls and stoicism as in VENGEANCE, except sometimes they turn into dudes, start giggling and hitting each other. That’s the tone: serious, but with a sense of humor about where life takes you. Funny, but not jokey. Artful, but not dry.

There are some clever twists on cliches, for example there’s a cop who keeps happening to be there to witness crimes but he’s about to retire so he just carefully backs away and stays out of it so he’ll survive his last 48 hours on the job. Another nice touch is when both sides of a gun battle try to go to the same underworld doctor to get the slugs taken out, so it turns into another shootout. I don’t know if that’s more convenient, since the doctors are right there, or if it’s worse because the equipment could get damaged and everything. It’s like having a car accident in the emergency room. The pros and cons make it a wash.

Anyway it seems unethical to me, to discharge guns in the place where you get the bullets removed. I think there should probly be some sort of protocol decided on in case this comes up again.

This one has a woman in it, the mother of Wo’s baby, and she’s no pushover. She sees the guy that came to kill her husband, she unloads a clip on him. Doesn’t matter to her that the movie has since turned him into a good guy. She’s a strong character, but it’s mostly a guy’s movie, a movie about best buds and new friends.

These guys will shoot anybody they have to, but if they can work it out instead they’re open to that. I mean, I gotta love a movie where (SPOILER) the last living guard on a gold delivery is gonna die protecting it rather than be blamed for the robbery, so they convince him to leave with them and split the gold. And then it’s not some question of whether or not they can trust each other. He just becomes one of them.

I think personally I liked VENGEANCE a little better with it’s poetic simplicity and easygoing critique of the logic of revenge. But EXILED is a pretty damn good ode to guns, brotherhood, and hanging out. I want to be its friend.

Anthony Wong hitman Hong Kong action Johnnie To Simon Yam Suet Lam
This entry was posted on Tuesday, February 22nd, 2011 at 3:01 am and is filed under Action, Crime, Reviews. You can follow any responses to this entry through the RSS 2.0 feed. You can skip to the end and leave a response. Pinging is currently not allowed.