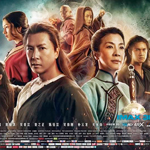 No, the director is not Ang Lee, but it’s not nobody either – it’s Yuen Woo-Ping, whose choreography was the life’s blood of the first film. I wouldn’t say he tops it here, but he brings more graceful glides, spinning swords and nimble roof top skips and hops. It’s worth noting that today’s technology is used to create more elaborate magical realism, like when the two leads ride in on horses, block a barrage of spears, leap high into the air, land and begin a sword fight, all in one beautiful shot. 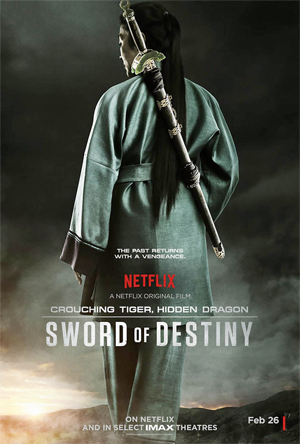 I love how detailed his style is in its use of the different senses, especially the aural. The sounds of wood clanking and crunching, metal clanging and vibrating, vases cracking, bricks crumbling, swords dragging across dirt or stone, and of course wind whooshing are as intoxicating as the movements themselves. Extra credit to the part where the character Silent Wolf (more on him later) hops around landing on people’s feet, crunching and hobbling six guys in a row.

My favorite fight is probly the huge outdoor bar brawl which includes, among other things, a cook (Xiaofei Zhou I think?) fighting off a guy with two ladles and then using one to dump hot soup and noodles on him. I’d say the most innovative fight, though, is the one that takes place on a frozen (and cracking) lake. The surroundings are clearly artificial, but it sure looks like the combatants are really sliding around on ice. Hockey rink, maybe?

If you remember the end of the original, Chow Yun Fat’s Li Mu Bai had been fatally poisoned, and Zhing Ziyi’s Jen had leapt off of Wudan Mountain either as suicide or to fly away like a magical squirrel or something. (I lean toward the latter.) SWORD OF DESTINY doesn’t violate either of those things, so the returning stars are Michelle Yeoh as Yu Shu Lien and the Green Destiny Sword as itself.

Yeoh is the lead, and her soothing narration makes the bizarre choice to do this in English much more palatable. Eighteen years after Li Mu Bai’s death she still mourns him, walking out to the edge of a cliff to think about him. “Followers of the Iron Way have become few and far between,” she says, while “The Martial World” is divided into warring tribes. Sir Te, her father figure who has kept the Green Destiny sword safe, has died, so Lu Shien travels to pay her respects to his son (Gary Young).

Good timing, because this asshole called Hades Dai of the West Lotus (a burly Jason Scott Lee [DRAGON: THE BRUCE LEE STORY] – another good trade for the English dialogue) has just learned the location of the sword from a blind enchantress (Eugenia Yuan, THE MAN WITH THE IRON FISTS 2). This is a guy who already uses a scary curved and serrated blade with a sculpted dragon hilt and sheath, so his interest is a testament to Green Destiny’s street rep. 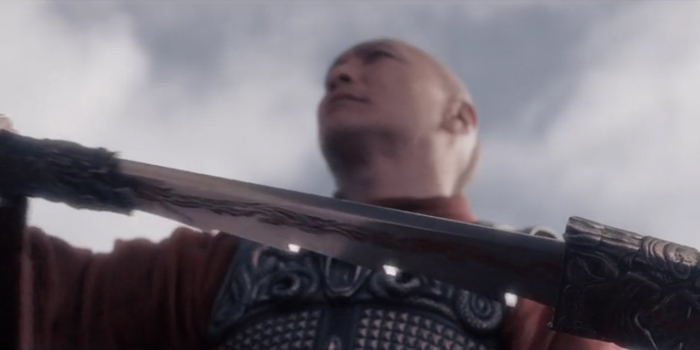 Just as in part 1, a young masked fighter sneaks in at night to steal the sword from the Te residence, but this time it’s a boy, Wei-Fang (Harry Shum, Jr., STEP UP 2–3), and he’s stopped by a girl named Snow Vase (newcomer Natasha Liu Bordizzo) who (like part 1’s Jen) is a pretty heiress by day, elite asskicker by night. Shu Lien decides the best thing to do is put the boy in a cage and train the girl in the Iron Way. She reads her fighting style, suspects who taught it to her, and believes she can learn from her.

So there’s at least one beloved martial arts movie trope that’s not really in part 1: training. Shu Lien gets to offer her student wise metaphors (“True skill is not a blazing flame”) and make her stand in a cool pose with a teapot balanced on her foot and time herself by the shadow from a stick. Cool shit like that. She makes her use a willow branch to stab the hole in the center of a coin on a string. Then she gives her a real sword and defeats her using the branch.

The cinematographer is Newton Thomas Siegel (THREE KINGS, Bryan Singer’s movies, DRIVE) and the look is very different from what Lee and Peter Pau established. It’s much more of a modern, digitally enhanced martial arts epic. I think the often-times colorful look fits the material, and there’s a good variety to it – desaturation for the West Lotus, plenty of yellow tinting and orange light against blue backgrounds, also green and blue for the ice scene, and I especially like the picturesque area she lives in during peace time, with its exaggeratedly green grass, like a fantasy land.

Now, you remember in the first one, the reason Li Mu Bai had never confessed his love to Shu Lien was that she had been engaged to his late best friend? Well, holy shit, that was Donnie Yen they were talking about! And he actually didn’t die, he just got pushed off of Vulture’s Peak in a duel with Hades Dai and decided to play along with being dead and go practice alone on a mountain. Not a mountain with a temple, just a mountain where all the local birds and bears and shit are gonna be going “What the fuck is up with this guy?” He spends his days swinging swords, finding enlightenment, feeling sorry for himself and staying out of the way so Shu Lien can be happier with her obvious true love, Li Mu Bai.

But now he has returned as the mercenary Silent Wolf, leading a crew who are hired to guard the sword. When Shu Lien finds out that he’s alive she rightfully scolds him for the dramatic gesture that didn’t even work – Li Mu Bai never got with her because he thought it would be dishonorable to marry the love of his dead friend! “You feigned your death for nothing.” But she also respects his skill, so she allows him to stay on a strictly professional level.

Silent Wolf’s elite team, recruited when they help him in that great bar brawl scene I mentioned, are very likable. They have cool gimmick-describing names like Flying Blade (Chris Pang, I, FRANKENSTEIN) and Silver Dart Shi (JuJu Chan, SAVAGE DOG). Thunder Fist Chan (Woon Young Park, THE SHADOW) has metal tubing on his arms and fights with an appropriately sledge hammery style. Turtle Ma (Darryl Quon, FUTURESPORT) carries a shield on his back like a shell. He takes the job for the wine and luckily is one of those loving/lovable drunks.

Some of their foes include Mantis (Veronica Ngo, STAR WARS: THE LAST JEDI) and Iron Crow (Roger Yuan, AMERICAN KICKBOXER 1, LETHAL WEAPON 4, the Fiendish Dr. Wu in BLACK DYNAMITE), so even if this lacks the emotional depth of an Ang Lee film, it does have the colorful mythology of a RZA picture, with superior action filmatism.

This saga started out as a series of books (not available in English) known as The Crane-Iron Pentalogy by Wang Dulu. CROUCHING TIGER was actually the fourth book, and this one is partly based on the fifth, Iron Knight, Silver Vase (though judging from a summary on Michelle Yeoh’s websight the book does not deal with Yu Shu Lien and Silent Wolf – only the secondary characters). The screenplay is by John Fusco, the guy that wrote YOUNG GUNS and SPIRIT: STALLION OF THE CIMARRON. I guess it’s more relevant that he wrote THE FORBIDDEN KINGDOM, but I haven’t seen that one yet.

Like the original, this is a melodrama about people struggling with past traumas and deep regrets. Poor Shu Lien is still mourning Li Mu Bai and the Tes and now is being tormented by the opposite, that her old love is actually not dead. Silent Wolf knows he fucked up and can’t erase it. Even the long deceased Li Mu Bai’s past is causing trouble. The sword he hung up is causing bloodshed just by existing, and the blind enchantress is out for vengeance because he apparently killed her parents.

Snow Vase, just from seeing Hung Fei’s birthmark during a sword fight, knows a secret about his past that he doesn’t, and she’s trying to avenge something that happened to her teacher. Shu Lien asks her to let go of her past, but has trouble doing it herself. Once again she concerns herself with teaching a young person whose path is not yet set to avoid the mistakes she made.

I’ve watched this twice now and I think it’s a good one. In the end (SPOILER), Hades Dai gets his hands on the Green Destiny and Silent Wolf still runs him through with his dragon sword. R.I.P. the legend of nobody ever being defeated in a duel while holding the Green Destiny. With his last breath, Hades Dai observes, “We don’t hold the sword. The sword holds us.” Deepest and least evil thing the man ever said.

I love that kinda shit! I’m sure you do too, so don’t brush off SWORD OF DESTINY.

Note: I don’t know what the deal is with the import discs that are out there – one review complained about not having English subtitles, but didn’t specify if it had the English audio.