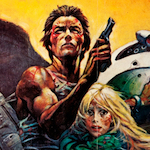 THE GAUNTLET (1977) is some creep’s idea of a triumph-of-the-underdog buddy action comedy romance – the story of a grouchy alcoholic loser cop who finally does a good job at something when he has to transport a prostitute from Las Vegas to Phoenix while every single cop and mobster in multiple states is trying to bump her off. Along the way they insult and assault each other and fall in love. It’s all very scummy and I didn’t used to like it very much, but these days it rings truer than it used to.

Clint Eastwood plays the cop, of course – Ben Shockley, no relation to Hank and Keith Shocklee of the Bomb Squad, as far as I know. Sondra Locke plays the prostitute, Gus Mally. It was their second movie together, following THE OUTLAW JOSEY WALES. Eastwood was in an allegedly open marriage, and he and Locke were near the beginning of a 14 year domestic partnership. In the movie their characters are really mean to each other, until they’re not.

One way you know Clint directed this one: it opens with nice laidback jazz (score by Jerry Fielding [THE WILD BUNCH, THE MECHANIC]) as the sun comes up in Phoenix. And Shockley walks ever so slowly from the bar* to his car parked across the street and drives straight to work. An almost empty Jack Daniels bottle falls out when he opens the door, so I guess the bar wasn’t enough for him. 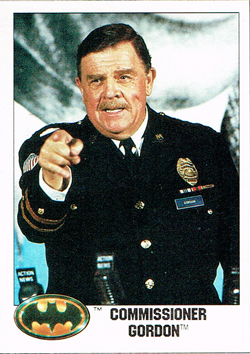 As is cop movie tradition, he Looks Like Shit (much attention is paid to him not having shaved, though he doesn’t look scruffy to me), and his protective ex-partner Josephson (Pat Hingle, HANG ‘EM HIGH, BREWSTER’S MILLIONS, BATMAN) sprays Binaca in his mouth before his meeting with the new commissioner Blakelock (William Prince, SPONTANEOUS COMBUSTION), who gives him the Vegas assignment.

He takes it for an easy job, a free vacation, but it becomes clear at least by the time of his rental car blowing up that something’s up. Gus doesn’t want to be transferred at all, and swears the bookies are even taking bets on her not making it. At times the movie veers into pretty broad comedy, but to me the biggest laughs are the drier stuff like Shockley’s “you gotta be fuckin kidding me” Clint Eastwood scowl when he’s getting a drink and happens to notice a “horse” called “Gus Malley No Show” up on the board. 60 to 1 odds, and it will keep getting worse. I also love the joke of how slow he is to catch on that he got the assignment because they needed a guy that sucks at his job. When Gus gets fed up and asks him something like “Why do you think they chose you?” he stubbornly yells back the same smoke that the corrupt commissioner blew up his ass: “‘Cause I get the job done!” You can feel him recognizing his own denial.

The cops claim he shot at them, so he becomes a fugitive. I like Bill McKinney (CLEOPATRA JONES, THUNDERBOLT AND LIGHTFOOT, CARNY) as “Constable,” the random cop-in-the-wrong-place-at-the-wrong-time who Shockley abducts at gunpoint for transportation purposes. At first he seems like an okay guy, going along with it peacefully, and acknowledging that from what he overheard on a payphone Shockley might be telling him the truth, but he turns out to be a misogynistic pervert who keeps asking Gus degrading questions about being a prostitute. Shockley just stares at him in disgust. This is a constant in Clint’s movies: the appalling attitudes that some people think they’re glorifying (and maybe sometimes they have a point) are almost universally frowned upon in the eyes of the movies themselves.

But it’s a gross world they live in. We can laugh at Shockley’s casual dirtbagginess – getting picked up from the airport in Vegas, rudely ignoring the cabbie’s friendly conversation while daintily sipping on an airplane bottle of whisky – but not some of the stuff Gus has to go through. In the movie’s most upsetting scene she decides to open her shirt and offer herself up to a mob of bikers to distract them from beating Shockley to death. They take the bait and she has to squirm underneath them for a few minutes while Shockley tries to break the wire around his wrists and stop them.

I don’t like watching scenes like that, but I think the most powerful thing in the movie is the long look he gives her once they’re both safe. There’s no “my hero, you saved me!” shit. His stare implies horror, confusion and gratitude for what she chose to go through to save his life, wordlessly acknowledging its heaviness. It changes everything for both of them.

The screenplay was at one point meant for Marlon Brando and Barbra Streisand, then Steve McQueen and Streisand. I can’t see any of them being willing to make it this grimy. It’s written by Michael Butler & Dennis Shryack, who had THE CAR released the same year and later wrote CODE OF SILENCE and PALE RIDER for Clint (the former rejected as a DIRTY HARRY sequel before being made into the Chuck Norris movie). Shryack also wrote TURNER & HOOCH and Butler did Jim McBride’s made-for-cable Elmore Leonard adaptation PRONTO, the first screen appearance of Raylan Givens.

I guess the marketing department made a big deal about Locke being the first woman to share equal billing with Clint. And he apparently predicted that she’d win an Oscar for it. She didn’t. Maybe he was thinking of Hilary Swank in MILLION DOLLAR BABY 27 years later. 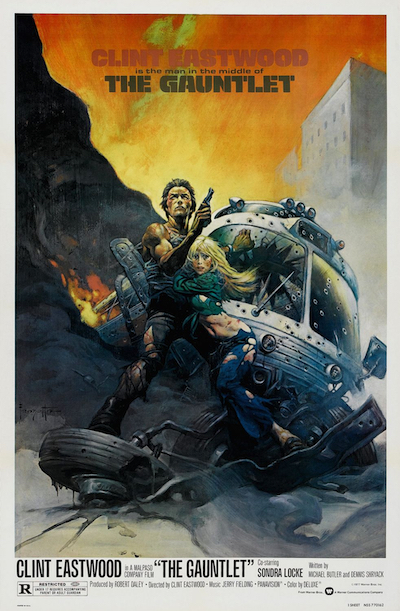 any people have asked me to review THE GAUNTLET over the years, and I’ve resisted because I’d seen it and didn’t love it, partly because I found Locke kind of annoying in it. This time I liked it much more, and felt more aware of what an asshole Shockley is and how much he has earned being kicked hard in the balls by a hooker. (I’m also now conscious that, in contrast to the heroic life I’d like to imagine for him, the real Clint may have vindictively sabotaged Locke’s directing career after their breakup, which would be indefensible.)

But I always start off a new year with a Clint review, and I thought THE GAUNTLET was a pretty good metaphor for the one we just made it through. And I had more of an appreciation for the character of Gus this time. I like that she doesn’t seem to have much shame about being a prostitute, no matter how much the men try to use it against her. She knows what she’s about. She has a B.A. from Finch College, by the way. (Notable alumnae: Suzanne Pleshette, Isabella Rossillini, Grace Slick.) Mostly I like when she tells people off. She sounds so cold when she tells Shockley that they wanted him to transport her because “nobody – not a fuckin soul – is gonna give a rat’s ass” if he dies.

The thing I remembered most about the movie, probly the thing it’s most famous for, is the titular gauntlet, when they travel the last blocks to their destination in a hijacked bus Shockley reinforced with metal shielding while cops crowding the streets and hanging out of every window and off of every roof fire a couple of John Woo movies worth of bullets into it. I didn’t even think about it until I read it in Roger Ebert’s review, but in a movie where police must fire something like 20,000 rounds of ammunition (8,000 squibs were used on the bus alone), “Eastwood himself fires his pistol only twice: once at a door, and once at a gas tank.”

The thing I didn’t understand this time around is the resolution. I didn’t really believe that once he gets there they’d all stand down for some reason. Seems naive in the same way as the end of STRANGE DAYS. But up until then I love the movie’s bleakly satirical world view – do I dare say it’s even a little Verhoevian? Aside from desk jockey Josephson, this piece of shit Ben Shockley is the most honorable cop we ever see. The rest of them, in multiple cities and states, at all ranks, are absolute maniacs willing to execute people on command, whether or not they know it’s just to cover up the commissioner being an abusive pervert. (At least one of them does know that and still helps.)

Definitely the best thing about the movie is the way the overzealousness of police is gloriously and un-subtly expressed through the medium of bullet holes, such as in the scene where they riddle every inch of every wall of Gus’s house until the entire thing collapses. Believing they have just pulverized two living human beings inside, one of the officers turns to his commanding officer and notes, “Cap, they shoulda surrendered.”

They also do this to a car and a bus. They just make colanders out of these things. Worse than that car that gets shot up in DICK TRACY. (This love for exaggeration is also reflected in hiring the great Conan cover artist Frank Frazetta to paint the poster.)

Throughout this mutli-state operation that includes a car bombing and a helicopter crashing while shooting at them on a motorcycle (and playing some upbeat jazz in the cockpit) the police always refer to their target not by her name, but as “the girl.” The commissioner is concerned that it’s gone this far, but he’s glad that “our boys” have access to bazookas and can “control the media” with a cover story. And as another officer notes, “He could put an army on the street and no one would question it.” Man, you have no idea how much truer that will become.

So yeah, I like THE GAUNTLET now. It’s pretty accurate.

Further reading: I liked this article about the movie and its novelization, which was written by Butler & Shryack themselves and supposedly has more of a Peckinpah tone.

Arizona Clint Eastwood Dennis Shryack Frank Frazetta Jerry Fielding Las Vegas Michael Butler Sondra Locke William Prince
This entry was posted on Monday, January 4th, 2021 at 10:38 am and is filed under Action, Reviews. You can follow any responses to this entry through the RSS 2.0 feed. You can skip to the end and leave a response. Pinging is currently not allowed.

15 Responses to “The Gauntlet”