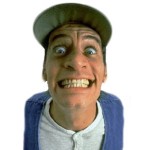 Anyway there’s a reason I bring this up, it has to do with this review also. The director of that picture was Robert Kaylor, who according to amazon.com presents the internet movie database only did three other movies, and of those three this here CARNY is the only one in print. So I watched it.

And it’s a pretty good one. It stars Gary Busey, Robbie Robertson and Jodie Foster, in one of those young, good lookin, kill the president for me type of roles she could do in 1980. She plays your typical young, abused gal tired of her small town and she even has the line “I swear if I had the money I’d get on a bus and get out of here” and of course this means she’s gonna run off and join the fuckin circus. Or carnival or whatever.

Busey, everybody’s favorite horse toothed nutjob, plays “the Bozo”, a clown in the dunk tank who spews abusive comments out a loudspeaker in a Popeye voice, pissing everybody off so they’ll pay for more balls to throw at him. Robertson is his partner Patch, a tough guy who sells the baseballs but also walks around and oversees all the other games and cons going on in the show.

And I mean you pretty much know what you’re gonna get from the beginning. Both the guys are gonna end up havin sex with Jodie Foster and that might be trouble. Some town rednecks are gonna get pissed when they see they’ve been had, and violence will erupt. The local criminals will have it in for the carnies because they won’t give them as much as a payoff as they want, and the carnies will have to play a carny trick on them. You know the drill.

But what makes it work is the detail, the atmosphere and this Robbie Robertson fellow. Robertson I guess is a musician, from some band called The Band. I’m not familiar with whatever he plays. But in this movie I’d swear he was one of your lesser known Badass actors. He looks like a cross between Peter Coyote and Huge Ackman. He’s droopy eyed and quiet and he’s got a real presence, he walks around and he knows his carny shit and he pulls a knife when necessary. He’s kind of a Warren Oates type. Which works out because the movie has a bit of a Monte Hellman feel. The Monte Hellman from COCKFIGHTER, not the one from SILENT NIGHT DEADLY NIGHT PART 3.

Robertson produced the movie and gets part of the story credit and did some of the music. I’m guessin he was real into the carny lifestyle and the whole thing was his pet project. Maybe he even saw DERBY and hired Robert Kaylor, I don’t know. Anyway it’s one of those pictures where you can tell they did alot of research, took alot of notes and tried to fit it all in there. So you get alot of carny slang and con game inside info and secret languages and whatnot. You got some real circus freaks and some standing up for their right to make a living, etc. And you get the whole seedy underbelly of the carnival type deal, the corruption, the way Patch has to try to smooth things out with the locals and the crime bosses. He’s one of the quiet, peacemaking type of badasses.

The movie doesn’t end up quite as dark as it first seems like it will, and you don’t feel like you’ve seen a great story here. But I think it’s worthwhile especially for Mr. Robertson’s performance. Too bad him and Robert Kaylor didn’t seem to do anything else of note. Unless you count twiddlin around on a guitar in a Martin Scorsese movie. La la look at me. He’s like Steven Seagal, he’s trying to spread himself too thin. Next thing you know he’ll be selling mystical oils on the internet. Stick to the movies, Robertson. That’s you’re true calling.

Craig Wasson Gary Busey Jodie Foster Robert Kaylor
This entry was posted on Tuesday, January 1st, 2002 at 4:34 am and is filed under Drama, Reviews. You can follow any responses to this entry through the RSS 2.0 feed. You can leave a response, or trackback from your own site.

One Response to “Carny”